What happens when the vaccine for a childhood disease fails? 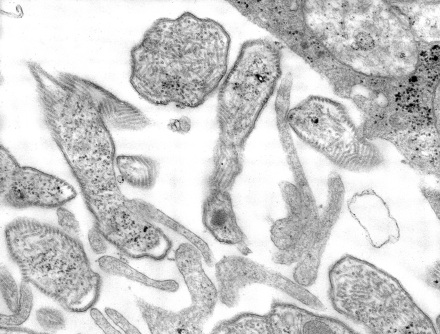 A young man came to the New York University Medical Center in May complaining of painfully swollen and inflamed testicles. His doctors were baffled.

There are a few things, like sexually transmitted diseases, that may infect the testicles, explains Joel Ernst, director of the Division of Infectious Diseases and Immunology at NYU.

But when Ernst was called in to see this patient, he knew it was no STD—it was the mumps.

In the 1960s, before a vaccine was invented, many people came down with the mumps. There were 212,000 cases of the mumps in 1964, but since the vaccine was introduced in the late sixties, the number of mumps cases has declined.

Since 2001, there have only been a few hundred cases of the mumps. But, more cases have been showing up. Recently, outbreaks hit thousands in the Midwestern United States and Great Britain. Doctors, epidemiologists and other public health officials are wondering how to combat a disease that was thought to be under control but now seems to be making a comeback.

As an infectious disease specialist, Ernst still knew to look for the mumps. To make his diagnosis, he took a careful history. In the weeks prior to seeing Ernst, the young man spent a lot of time with a friend who had enlarged neck glands. His friend recovered in about two weeks.

People contract the mumps by breathing infected droplets of saliva, so the young man probably got the virus from his friend. Then the virus spreads throughout the body, infecting certain glands. The mumps virus prefers the parotid glands, which are salivary glands below and in front of the ears. One or both of these glands may swell up.

As is the case with many infectious diseases, people with the mumps are contagious before they feel sick. This means a “great potential for person to person transmission,” explains Philip Alcabes, an associate professor of Urban Public Health at Hunter College. The window for transmission lasts about 18 days.

Intriguingly, Ernst’s New York patient apparently had been vaccinated against the mumps. The patient’s memory was a little fuzzy, says Ernst, but people often don’t remember when they were immunized since vaccinations are usually given to young children. He’d grown up in the United States and went to public school, which often requires immunizations, and his family had no religious or other objection to the vaccine. There was no reason he wouldn’t have been vaccinated, Ernst concludes.

Because of his complications, the patient was hospitalized, which is uncommon for mumps patients. “[Mumps is] threatening to young men,” explains Ernst. In men, the virus infects not only the salivary glands, but also the testicles where it can cause infertility or sterility.

Such severe outcomes are unlikely, however, according to Stephen Morse, a viral epidemiologist at Columbia University. “About five percent become sterile,” says Morse.

Other common secondary infection sites are the ovaries and meninges, which are the membranes that envelope the brain and spinal cord. Ovarian inflammation does not lead to sterility. Over half of mumps patients also have meningitis, but might not even know it since they don’t have any other symptoms.

To keep him comfortable, the young man at NYU was given morphine—mumps is a virus, so there is no drug that can cure it. Doctors can only treat the pain, explains Ernst, who suggests drinking plenty of fluids, taking Tylenol to control fevers, and just letting the immune system do its work.

Just where the New York case came from is not known—the young man’s friend did not seek medical attention. There are always a few cases of the mumps that rear their head in the United States each year, but those usually occur in immigrants who have not been vaccinated.

Last December, however, the mumps sprang up on a college campus in eastern Iowa. The virus spread to ten other Midwestern states, affecting at least 2,597 people. Health officials think an on-going British mumps outbreak was imported to the Midwest, but they are not sure exactly how that happened.

Just the one case in New York was reported to the Center for Disease Control and Prevention in early June, so there is no imminent outbreak here.

Vaccine-preventable diseases, no matter how good vaccines are, may still arise. These recent cases of mumps—both in New York and the Midwest—show that people do not have complete control over the behavior of viruses. But, from each new instance of disease, doctors and epidemiologists can learn from mistakes to make new outbreaks less common.

Because of vaccines, there are only a few common childhood ailments left. But no vaccine gives one hundred percent coverage—there are always those unlucky few who fall ill anyway. Forgotten childhood diseases, like the mumps, resurface every so often because not everyone is protected.

The vaccine for the mumps works well, though. Many young doctors have only read about the disease in textbooks—they’ve never seen an actual case.

“During the so-called mumps season, I saw one to two a day,” says Herbert Pomerance, a professor of pediatrics at the University of South Florida, who began practicing medicine in the 1940s. “Now, there is the risk that [young doctors] will miss it.”