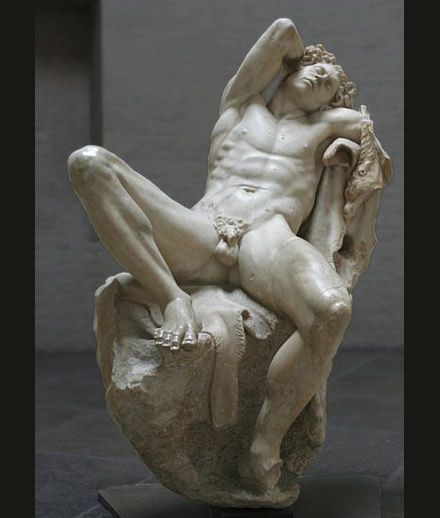 For many women, the correlation between sex and snoring is one of those annoying facts of life: no matter when passionate encounters occur, men always seem to fall asleep immediately afterwards. Dave Zinczenko, the author of Men, Love and Sex: The Complete User Guide For Women, explained the phenomenon to Huffington Post writer Arianna Huffington this way: “Men go to sleep because women don’t turn into a pizza.”

I doubt I am ever going to become a pizza, and I’ll never have the foresight to order one beforehand. So in lieu of a cure, a better explanation will have to do. Although women sometimes feel sleepy after sex, the phenomenon does seem more pronounced in men. What is it, then, that spirals them into the land of nod?

First, the obvious reasons for sex’s somnolent sway: the act frequently takes place at night, in a bed, and is, after all, physically exhausting (often more so for the man than the woman, although this certainly varies). So when sex is over, it’s natural for a guy to feel sleepy.

Secondly, research using positron emission tomography (PET) scans has shown that in order for a person to reach orgasm, a primary requirement is to let go of “all fear and anxiety.” Doing so also tends to be relaxing and might explain the tendency to snooze.

Then there is the biochemistry of the orgasm itself. Research shows that during ejaculation, men release a cocktail of brain chemicals, including norepinephrine, serotonin, oxytocin, vasopressin, nitric oxide (NO), and the hormone prolactin. The release of prolactin is linked to the feeling of sexual satisfaction, and it also mediates the “recovery time” that men are well aware of—the time a guy must wait before “giving it another go.” Studies have also shown that men deficient in prolactin have faster recovery times.

Prolactin levels are naturally higher during sleep, and animals injected with the chemical become tired immediately. This suggests a strong link between prolactin and sleep, so it’s likely that the hormone’s release during orgasm causes men to feel sleepy.

Oxytocin and vasopressin, two other chemicals released during orgasm, are also associated with sleep. Their release frequently accompanies that of melatonin, the primary hormone that regulates our body clocks. Oxytocin is also thought to reduce stress levels, which again could lead to relaxation and sleepiness.

What about the evolutionary reasons for post-sex sleepiness? This is trickier to explain. Evolutionarily speaking, a man’s primary goal is to produce as many offspring as possible, and sleeping doesn’t exactly help in his quest. But perhaps since he cannot immediately run off with another woman anyway—damn that recovery time!—re-energizing himself via sleep may be the best use of his time.

And although there is conflicting information as to whether women feel sleepy after sex, a woman often falls asleep with the man anyway (or uses it for some key cuddling time), which is good news for him: it means she is not off finding another mate. When the man wakes up and she’s still there, he just might be ready to go again.

It’s also possible that sleepiness is just a “side effect” associated with a more evolutionarily important reason for the release of oxytocin and vasopressin. In addition to being associated with sleep, both chemicals are also intimately involved in what is called “pair bonding,” the social attachment human mates commonly share. The release of these brain chemicals during orgasm heightens feelings of bonding and trust between sexual partners, which may partially explain the link between sex and emotional attachment. This bond is favorable should the couple have a baby, as cooperative child rearing maximizes the young one’s chances for survival.

The bottom line is this: there are many potential biochemical and evolutionary reasons for post-sex sleepiness, some direct and some indirect—but no one has yet pinpointed the exact causes. One thing, however, is certain: we females better get used to it, because it doesn’t look likely to change anytime soon.

I will leave frustrated American women with one final thought: if you are upset at the ubiquity of the post-sex snoring phenomenon, remember that things could be a lot worse. A recent survey of 10,000 English men revealed that 48 percent actually fall asleep during sex.

We are lean of course until you overdose on the SAD diet (Sad American Diet).

Frank Gotch and George Hackenschmidt were sports superstars of their era.
The respiratory rate should drop below the heart rate after 10 minutes.

It’s great to be gay! We both fall asleep!

So this is where it has come to – We are just self centered animals , after all ?

Wow – so many lies . First of all , we are created in the image of our Creator . We have

spirits and we have souls . We are created for soul connection with someone else , and

science proves it . When these chemical are released , a strong bonding takes place .

on LOVE and strong bonding . It’s a strong beautiful relationship .

That’s just an opportunity to really shine boys!! Commit and follow through!! That’s why God gave you hands and tongues. Just because the roller coaster is down doesn’t mean the park is closed. Good piece Melinda…

American is changing for the best i can say this because the gay community just literally got liberated i mean we can officially get married and be part of the the American society. When i heard the news i was filled with joy i mean me and my fiance the man i have always can finally own our marriage certificate in Georgia.It was not always right for us if you know what i mean. Before we got married in California ,he was not in love with me or i would say he was in love with me and lost for another guy and it was frustrating.We were off and on and mostly times our break up was always bad it always ends with huge fight. I loved him and wanted to be all his for the rest of my life but he did not see that he wanted to have me to himself and still see other guy i mean who does that? He was the queen of heart breaker and also was perfect when he wants to mend the heart. This was why i also went back to him no matter what always led to our ugly break up. But this madness just kept going on over and over with us and like i said i was sick of it. You can’t hurt me over and over again and still come back to me i mean i am not a play thing you use and drop when you tired. Judge me if you will it not like i care because all my life people have always said trash about me but if i had paid their attentions i would not have been this happy. After searching for means to make him commit to me even taking him with me to couple counseling i decide i contact a spell caster called Obudun Magonata it was just an arbitrary choice i mean, i told myself if he can’t help me i will move on with my life maybe the one i clam to be the love of my life was not the one after all. Obudun Magonata is an angel sent from a place i don’t know.He save me and made me he happiest man on earth or more preferable the happiest gay man on earth . I don’t know how he did it just after he help me cast a love spell, every pain that i was going through was lifted of my shoulder like magic my lover became the queen of hearts i would say he became mine and loved me like his life depended on it.When i first contacted Obudun Magonata, he told me to come down to his temple so i may witness the greatness of his work we got the materials we used for the spell together and just after four day i say the greatness of his power.But i spent a lot Because i had to travel all the way to Africa.It will be cheaper for me to have had him get the materials form me but i was foolish. But its amazing i still got my heart desire. He also told me that the gay community will soon be free and in just two months his prophecy has come to pass. Who wants to tell me he is not great contact i you will here you will not regret your decision use thus address spiritsofobudunmagonata@ ( yahoo ). com rewrite to a normal email format-

This page certainly has all the info I wanted concerning this subject and didn’t
know who to ask.

I’m tired now and by myself.

If possible, can you respond to this query to solve my inner confusion? Thank you very much!