Why do humans kiss? 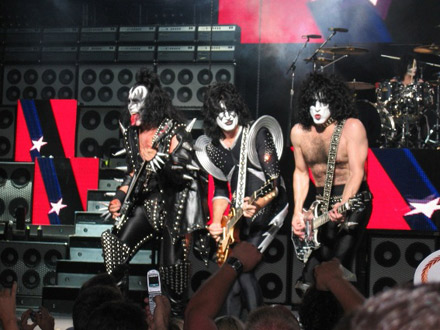 Scientists currently have no explanation for this particular KISS. (CREDIT: Wok)

Her eyes are wide as they stare into yours. You wrap your arm around her waist and pull her in close. She touches your face and you lean in, tilt your head – to the right, of course – and your lips connect. The rushing sensation leaves you little room to wonder, “Why the hell am I doing this anyway?”

Of course, the simplest answer is that humans kiss because it just feels good. But there are people for whom this explanation isn’t quite sufficient. They formally study the anatomy and evolutionary history of kissing and call themselves philematologists.

So far, these kiss scientists haven’t conclusively explained how human smooching originated, but they’ve come up with a few theories, and they’ve mapped out how our biology is affected by a passionate lip-lock.

A big question is whether kissing is learned or instinctual. Some say it is a learned behavior, dating back to the days of our early human ancestors. Back then, mothers may have chewed food and passed it from their mouths into those of their toothless infants. Even after babies cut their teeth, mothers would continue to press their lips against their toddlers’ cheeks to comfort them.

Supporting the idea that kissing is learned rather than instinctual is the fact that not all humans kiss. Certain tribes around the world just don’t make out, anthropologists say. While 90 percent of humans actually do kiss, 10 percent have no idea what they’re missing.

Others believe kissing is indeed an instinctive behavior, and cite animals’ kissing-like behaviors as proof. While most animals rub noses with each other as a gesture of affection, others like to pucker up just like humans. Bonobos, for example, make up tons of excuses to swap some spit. They do it to make up after fights, to comfort each other, to develop social bonds, and sometimes for no clear reason at all – just like us.

Today, the most widely accepted theory of kissing is that humans do it because it helps us sniff out a quality mate. When our faces are close together, our pheromones “talk” – exchanging biological information about whether or not two people will make strong offspring. Women, for example, subconsciously prefer the scent of men whose genes for certain immune system proteins are different from their own. This kind of match could yield offspring with stronger immune systems, and better chances for survival.

Still, most people are satisfied with the explanation that humans kiss because it feels good. Our lips and tongues are packed with nerve endings, which help intensify all those dizzying sensations of being in love when we press our mouths to someone else’s. Experiencing such feelings doesn’t usually make us think too hard about why we kiss – instead, it drives us to find ways to do it more often.

Although it is true that you have deoxygenated blood in your body, it is not the reason why your veins appear blue – your blood is NEVER really actually blue.

Take advantage of all those free opportunities and, you will not be disappointed.
Keep an eye on this article for further AO rated games and
additions: meanwhile, remember that you may go blind, so play at your discretion. You can also avail of
subliminal imaging programs or applications that you can simply install in your computer.

That was very interesting! Thank you so much for writing this article, I am very happy to have found it!