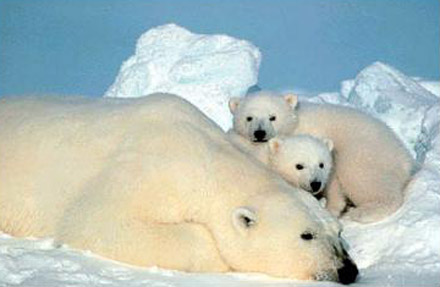 The early disappearance of snow due to warmer springs in high latitude areas near the arctic is not just a symptom of global warming; it’s also a contributor. The faster transition from white, reflective snow to sun-absorbing ground is amplifying the warming effect greenhouse gases have on polar regions.

Large expanses of ice and snow are known to bounce a significant amount of solar energy back to space. Recently, earlier spring thawing has exposed more dark ground beneath the snow, which encourages absorption of sunlight, rather than reflection. The warmer ground then heats the air above it, which causes more snow to disappear.

This feedback has accelerated the warming already occurring in these northern areas. “It certainly has contributed to the changes in [regional] climate,” says Stuart Chapin, a professor of ecology at the Institute of Arctic Biology in Alaska. Chapin studies albedo, a measure of the light a surface reflects compared to the total amount of sunlight reaching it. “In fact, that’s probably the largest reason for the really pronounced warming that’s happening in Alaska and other places in high latitudes.”

The Intergovernmental Panel on Climate Change recently recognized the alarming effects of albedo reduction in their latest report, released this February. According to the report, snow-covered land in the northern hemisphere shrunk by 580 thousand square miles—an area larger than Texas, California and Montana combined—during the early spring period from 1961 to 1990, largely due to atmospheric warming.

Chapin and a team of researchers studied the environmental impact of reduced land albedo in northern Alaska. In a study published in the journal Science in 2005, they measured a 3.6 degrees Fahrenheit warming of land surfaces in the months of June to August from 1961 to 2004, and identified larger areas without snow-cover that reduce albedo as the main cause. The warming of exposed ground, according to the study, also warmed the air directly above it, pushing the air temperature five degrees Fahrenheit higher than the last 75-year average.

While Chapin’s study focused on land albedo changes, his real worries lie with the disappearance of massive sea ice in the Arctic. “The difference in sea ice and water is so dramatic in terms of its albedo—water is so much darker and absorbs a lot more energy,” he said.

While melting land-ice causes seasonal albedo changes, the disappearance of vast sheets of snow-covered ice that cover arctic areas of ocean have “more memory” to cause permanent changes, according to Matthew Sturm, a geophycisist at the Army Corps of Engineers in Alaska, and contributor to the study.

As sea ice north of Alaska and Siberia melts, more water is exposed to—and heated by—direct sunlight, according to Chapin’s study. Although warmer water produces more clouds, which have the potential to block sunlight and exert a cooling effect, “the changes in surface albedo have been strong enough to more than offset increase in cloudiness,” says Chapin.

Even though changes in sea albedo have a larger effect on global climate, changes on land are easier to measure and track over time. “The sea ice is retreating over such a massive area over the annual cycle,” explains Chapin, who notes that solid ground provides a more stable surface environment to measure albedo changes.

Over the last 50 years, according to Chapin, the snow in Alaska has been melting approximately one and a half days earlier per decade. Premature thawing happens to occur when the concentration of sunlight is at its peak, during the annual summer solstice.

A shift of just a few days in snow melt may not seem like much, but as Sturm explains, “for that week we’re getting four times as much solar energy absorbed by the earth than we would have otherwise.” Add that up over several decades, he says, and “that’s quite a bit of heating.”

Preventing further changes in albedo, according to Chapin, depends on controlling the human activity that initiated it, especially the emissions of greenhouse gases from the burning of coal and oil. “We set something in motion that has a lot of inertia, and it’s going to be really difficult to stop it.”