A look at the emissions scenarios climate scientists use to predict the future. 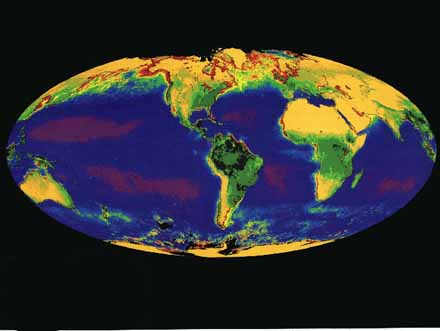 In the hypothetical world known to the Intergovernmental Panel on Climate Change as “A2,” the global economy is growing and pollution is rampant. Rather than implementing greener technologies, the A2 world still relies heavily on fossil fuels.

When the panel of climate scientists plugged A2’s parameters into their climate models, the projected outcome for the 21st century was not good: the global temperature was estimated to increase almost eight degrees Fahrenheit, by the year 2100. Sea level, meanwhile, was predicted to rise by 1.7 feet.

The A2 world represents one of many hypothetical storylines, also known as emissions scenarios, the IPCC used when writing their Summary for Policymakers, released on February 2. While the scenarios in group A describe worlds that make no attempt at preventing global warming, the scenarios in group B portray worlds that are concerned about the environment. As one might expect, the panel found that the B worlds, described as having less material waste and focusing on environmental sustainability, had more favorable outcomes in terms of climate and sea level than did the A worlds.

Still, some climate scientists charge that the emissions scenarios may not be very useful when it comes to their intended purpose: helping world leaders make decisions. One of the major concerns raised by critics of the scenarios is that the predictions of economic growth in many of them may be unrealistic. For example, John Reilly, who conducts climate research at the Massachusetts Institute of Technology’s Laboratory for Energy and the Environment, notes that some of the A worlds are described as economically convergent, meaning that by the year 2030 developing countries catch up with developed nations, such as the United States. Reilly suggests that the only way this convergence could occur is if the United States suddenly stopped growing by 2030–something he deems unlikely.

“To get those numbers, you have to be very optimistic,” concedes Hugh Pitcher, a researcher from the Pacific Northwest National Laboratory who helped develop the IPCC scenarios. If the A group’s numbers are optimistic, then the amount of temperature and sea level increase predicted for that group may be overly pessimistic.

The scenarios in the B group may also suffer from excess optimism since they assume environmentalism in the absence of global policy. Both Reilly and Pitcher agree that the idea of a world focused on environmental sustainability without the implementation of some sort of rules is unlikely. But, in many ways, the climate modelers’ hands were tied. The IPCC only allowed them to consider existing policies, and the Kyoto Protocol was still being developed. As a result, “there’s no policy structure there other than ‘good feelings,'” according to Reilly. He says the temperature changes projected for the B scenarios may give the false impression that no global plan is necessary in order to achieve a favorable outcome.

Other scientists contend that, although the emissions scenarios may not be perfect, they are still useful to policymakers. “None of these scenarios says, ‘we’re going to get through this fine,” says Stuart Gaffin, a researcher at Columbia University’s Center for Climate Systems Research who has worked on emissions scenarios in the past. He maintains that the overall message–that dire consequences will result unless the world begins a concentrated effort to reduce carbon emissions–comes across in the IPCC’s report.

Meanwhile, at the Pacific Northwest National Laboratory, Pitcher is focused on how he and his colleagues can use the storylines to assess how climate change will affect specific regions, especially where weather conditions are concerned. “The impact is going to be different in Chicago than in Mexico City. Our models don’t do a good job at addressing that,” he admits. He is currently gearing up for the next IPCC meeting, which is set to occur April 6 and will focus on impact and adaptability. “I think the message here is ‘stay tuned,” he says.