A new book explores the power network that connected us before the internet. 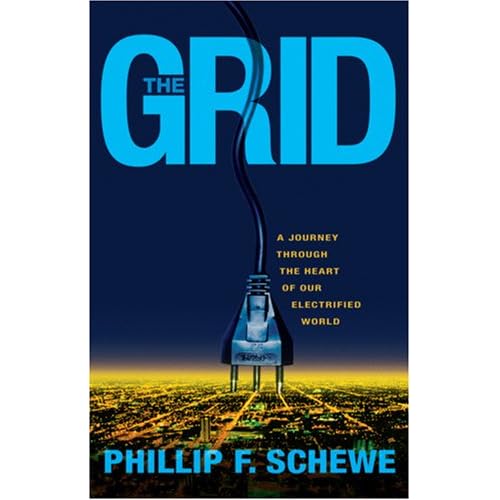 The Grid: A Journey Through the Heart of Our Electrified World
By Phillip F. Schewe, Joseph Henry Press, 2006. $27.95

Think about the defining technological features of the modern American household: television, internet, cell phones, hair driers, dishwashers, vacuums, iPods, and digital alarm clocks. None of these would be possible without the network of cable, wire and power plants that make up The Grid, the subject of Phillip Schewe’s first book. Yet Schewe illustrates that the grid is often as invisible as it is important and that we tend to grasp its impact only when it fails and strands us in the dark of a blackout.

“Do people really need to be reminded that a massively engineered quilt of energy-filled wires is on duty inside their walls? Yes,” Schewe writes. “We neglect to think of electricity as a made thing, a costly substance deliberately delivered to a specific location.”

This is Schewe’s biggest accomplishment in The Grid: refocusing attention to a staple of American life we tend to take for granted. Although he intended to deliver “the first full-length popular book devoted to the development of the power supply system,” Schewe, leaves fans of both history and science wanting for more.

Schewe writes that the book’s emphasis is on “telling in simple and vivid terms the story of electricity,” but the book reads more like a collection of essays than a coherent narrative. He devotes only six of the ten chapters to the development of the North American grid; in the others, Schewe attempts to provide context with blackout descriptions, visits to power plants, and profiles of power-line workers.

“Deeds of decades will be telescoped for a few dozen pages,” he declares, but perhaps Schewe could have used a few more pages if he had skipped the non-narrative chapters that bog down the second half of the book. In accordance with his belief that “the electrical grid is generally a good thing,” Schewe centers his stories on pro-technology figures like Edison, Tesla, and Westinghouse. Unfortunately, Schewe provides only brief snapshots of their lives, making them feel like a supporting cast rather than central figures. The reader deserves to know, not just meet these fascinating characters behind the technology.

In addition to slighting history in favor of power plant tours, Schewe, a chief science writer at the American Institute of Physics, devotes surprisingly little time or space to the science of electricity. Forty pages in, he admits that he has yet to explain exactly what it is. When he does tackle technical details, the experience is like listening to a recorded tour guide at an electricity museum with phrases like “we’re nearly done”, “now the big payoff”, and “if we’re lucky, we’ll be allowed into the reactor room.” The reader half expects a gift store around each page-turn.

Instead of providing useful technical insight, Schewe overdoses on commentary from “poets and historians who help tell us what our technology means.” This generally involves a paragraph or so from Henry David Thoreau, Lewis Mumford, or Henry Adams tossed in at the end of a chapter, a practice which feels more dutiful than necessary.

These critical voices may lend balance to the technology versus humanity debate, but that dilemma seems somewhat quaint and outdated. When it comes to electricity, we have a much more pressing energy question: How can we continue to live the power-hungry lives we’ve come to expect without permanently damaging the planet? Even though Schewe repeatedly talks about our increasing consumption, he never entirely places our situation and his book in perspective: America demands as much electricity as China, India, Indonesia, Brazil, Pakistan, Bangladesh and Russia combined. He does mention global climate change, but the images of melting glaciers and dying reefs have been written about hundreds of times before and to greater effect.

Much more successful are Shewe’s descriptions of the massive blackouts during 1965 and 2003. They manage to illustrate the grid’s importance better than any descriptions of a functional grid. As Shewe demonstrates, when the power goes out, life as we know it changes.

Transportation stops when gas pumps lose the necessary fluid pressure and traffic lights go dark. Commerce stops when ATM screens go blank and credit card transactions stop going through. Worst of all, sanitation stops. When Cleveland went dark in the blackout of 2003, “the pumps that pull water out of Lake Erie stopped, so there was no more drinking water. The associated process of waste treatment also stopped. Millions of gallons of sewage poured backward into the lake,” writes Schewe. “Not surprisingly, swimming in Cleveland stopped.”

It’s in these descriptions where The Grid becomes worthwhile. It reminds us that the immense power flowing in the wires beneath our feet and over our heads is worth paying attention to. How we handle power production and distribution will help define our future, but we first need to understand where we are. While The Grid didn’t live up to it’s own expectations, it provides a reasonable introduction to the subject.