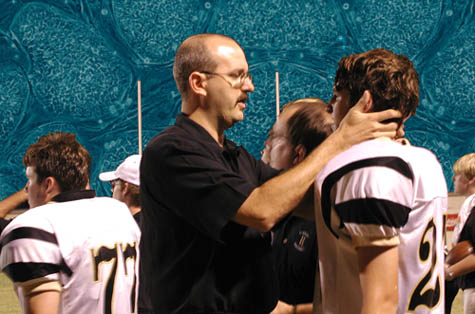 An Australian biotechnology company is meeting with professional sports teams, including some in the United States, about storing athletes’ stem cells and using them to speed up recovery if an athlete is later injured. No team has yet agreed to the partnership, but the company is already drawing criticism from researchers who say experimental stem cell treatments have a long way to go before being practical for sports injuries.

The treatment, which has shown promise in early clinical trials, would involve an injection of adult stem cells derived from the athlete’s own bone marrow cells. According to Silviu Itescu, the founder and chief scientific adviser for Mesoblast Ltd., the therapy can be administered as soon as six weeks after the initial cell donation should a severe injury – whether it’s a bone fracture, a knee cartilage tear or ligament damage – occur.

“It’s a very cheap insurance policy,” he said. Some athletes share Itsecu’s hope that stem cells could be used in sports injuries.

An English newspaper reported last year that several professional soccer players banked their children’s umbilical cord blood as a source of stem cells. Although Itescu said he could not assess the cost of treatment, which would not be covered by insurance because it is still experimental, ABC Australia reported it at $18,000 U.S. per player.

Itescu said that football teams from the United States and Australia heard about the success of Mesoblast’s small-scale clinical trials in Australia and initiated preliminary discussions about banking cells of elite players as part of a separate study funded by the teams. He would not identify the teams and said discussions are ongoing. He also said the company would not profit from treating athletes for the clinical trial but hopes to make money when the procedures are fully commercialized.

Mesoblast is conducting a small-scale clinical trial to probe the benefits of stem cell treatments for people who are recovering from injuries. The company’s pilot study consists of 10 patients who suffered long bone fractures in the leg, which had not healed after six to nine months. According to Itescu, all five patients who have finished the study so far demonstrated complete union of the bone within the first three months of treatment, without any side effects.

Stem cells reduce healing time by targeting damaged tissue and rapidly dividing to create new healthy cells specific to that tissue, Itescu said. And because they are not drugs, they can be injected to complement existing treatments without risk of rejection.

Mesoblast’s ultimate goal is for its stem cell treatments to be used for more common medical issues than healing injured pro athletes. Because the treatment uses rare adult stem cells that do not trigger the immune system, Itescu said that one person’s cells can be used for multiple patients. His goal is a low-cost procedure to treat those with broken bones and osteoarthritis.

Some stem cell researchers are not sold on the idea that stem cell therapies are ready to treat top athletes.

Dr. Thomas Vangsness, an orthopedic surgeon at the University of Southern California School of Medicine, called Mesoblast “irresponsible” for leading on athletes toward an unproven technique.

Vangsness is conducting an adult stem cell study of his own, with a goal of getting the cells to regenerate cartilage in the knee joint. His study utilizes Chondrogen, an injection containing cells similar to those used by Mesoblast.

According to Vangsness, stem cell treatments are still years away – estimating when is like guessing “how many angels can dance on the head of a pin,” he said.

Dr. Tracy Ray of the Alabama Sports Medicine & Orthopaedic Center, a facility that treats many top athletes, said he is optimistic about stem cell research over the long term but minimized its immediate impacts on sports medicine. “That’s still fairly futuristic as far as we’re concerned,” he said. “It’s still kind of on the cutting edge.”

Mesoblast, however, thinks the future is now. If teams are interested, Itescu said, there’s little risk in attempting the procedure. “People are free to pay for experimental procedures,” he said.

Learn about the use of stem cells in umbilical cord blood as an alternative to bone marrow transplants.

Listen to an audio podcast analyzing the science, religion and politics behind the latest major stem cell discovery.

Read about how just watching the big game can get your heart racing.