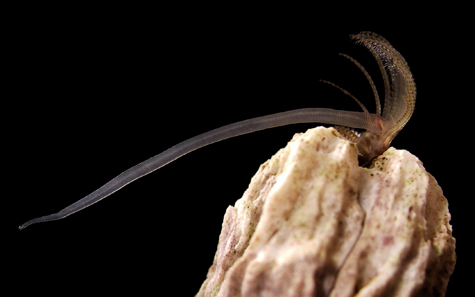 A barnacle on the prowl. [Courtesy: Christopher Neufeld]

Barnacles could easily have been the stars of those flickering high school science films about the magic of reproduction – they have longer penises than any other animal in relation to body size. Some particularly well-endowed barnacles have willies up to eight times their body length.

Yet all that can change depending where a barnacle gets busy, according to a study published last week in the journal Proceedings of the Royal Society. Canadian researchers Christopher Neufeld and Richard Palmer found that barnacles in sheltered waters have significantly longer phalli than those living in areas with pounding surf.

Safe from crashing waves, bay-dwelling barnacles can let it all hang out. Their long, lithe penises can peruse nearby waters for many more mates, because a wiener’s range increases as the square of its length. In tumultuous waters, however, it can be problematic to retract a penis of pornographic proportions, so denizens there have shorter, stouter schlongs. These heftier members are much more effective at finding mates in the breakers.

Interestingly, average barnacles transplanted to turbulent shores developed stubbier, more stalwart johnsons than their brethren who moved to a protected bay. This suggests that penises, at least in barnacles, are susceptible to changes in shape based on environmental conditions, not just the usual sexual selection factors like female choice, sexual conflict and male-male competition.

The next time you take the kids to the tidepools, keep an eye on those feisty barnacles.

Spray-on condoms are for humans, silly barnacle: read about them here.