Drs. Nussenzweig have only one love besides each other: the quest for a malaria vaccine. 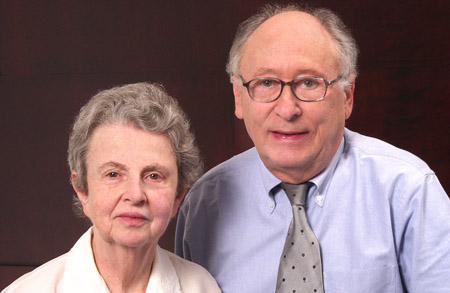 Ruth and Victor Nussenzweig have battled malaria in the lab together for half a decade. [Photo courtesy of New York University]

Halfway down a gray hallway at New York University’s Medical School, beyond a heavy, gray door, two people have been living with malaria for nearly 40 years. They are not suffering from the disease. In fact, they love having it around. Ruth and Victor Nussenzweig, both 79, are pioneers in the battle against a killer that claims the lives of more than one million people every year. But they are not fighting on the front lines in sub-Saharan Africa. They are in the bunker, blueprinting the battle plan.

Since the mid-1960s, this married couple has generated some of the most important breakthroughs to design a vaccine against the formidable malaria parasite. Their efforts have paved the way for the most successful malaria trial to date, which has recently been shown to protect the most vulnerable population: young children.

Ruth began researching malaria more than a decade before Victor got involved. She is small with short, wavy hair that is mostly gray. Her voice is quiet, but when she speaks she conveys a succinct authority.

“There was no vaccine for any of these parasitic diseases. The drugs were failing,” Ruth Nussenzweig remembers from when she began working at New York University in the mid-1960s. “So I started to immunize mice.”

There is still no vaccine. Drugs such as chloroquine and amodiaquine, which once cured 95 percent of cases, are all but useless in many areas of the world. Mosquitoes are growing resistant to pesticides such as DDT.

The problem with malaria is that it is caused by protozoa. Unlike viruses or even bacteria, protozoa have multiple stages in their life cycle. That complexity makes it easy for the parasite to evolve resistance to drugs and pesticides. In particular, it requires careful tactics to fight this shifty enemy after it infiltrates the human body.

Plasmodium falciparum, one of four malaria parasites that infect humans, is responsible for 80 percent of the estimated 500 million annual infections and 90 percent of the deaths worldwide.

When the parasite pours out of the liver into the bloodstream, fever grips the body, only to be punctuated by shivering chills. Sweating and cold spells are often mixed with vomiting, headaches, sore joints and anemia. In the most severe cases, children are left mentally impaired, if they live at all. For those that make it to adulthood, immunity is only obtained through repeated exposure.

Only the female mosquito carries around these killing machines. When the insect bites an infected human she can ingest the parasite that is swimming around in the blood. The malaria parasite sexually reproduces inside the insect then waits in the mosquito’s salivary glands until the next meal. As soon as the mosquito’s contaminated saliva gets into bloodstream of the next human, the parasites make a beeline for the liver.

In less than 30 minutes they invade the liver cells, multiplying silently and efficiently. Every single protozoan reproduces by the thousands while hiding in the liver cells, morphing into the next stage in the life cycle. The human body gives no warning of the invasion.

After one to three weeks, thousands of malaria parasites rupture the liver cells and spill into the bloodstream. They immediately infest red blood cells where they continue to spawn by the thousands before the immune system can launch a counter-attack.

In the following stage, the parasites explode out of red blood cells and back into the bloodstream, finding new cells to invade. As the red blood cells are infected, the body becomes deprived of oxygen. At this point clinical symptoms of fever, shivering, vomiting and headache set in.

Building a vaccine to attack P. falciparum in the half-hour before it invades the liver means stopping malaria before a body is infected. In 1966, Ruth decided to immunize mice with the parasite while it was in the earliest and shortest stage, known as the sporozoite phase. “The dogma was that you could not make an immune response to the first stage of the malaria parasite,” Victor says. Ruth knew that was wrong.

Different vaccines could be developed to target every part of the parasite’s life cycle, but this early stage has garnered the most attention. However, even harvesting sporozoites is not simple. The mosquito’s salivary glands are “full of crap, which you cannot inject in humans,” Victor explains.

Mostly bald with dark, lively eyes, he gets easily excited in his ergonomic office chair as he talks about the life cycle of malaria. Ruth interrupts him from a wooden chair to offer the short version of the answer, “You irradiate the mosquito.”

And this is what she, along with Dr. Jerome Vanderberg, also at New York University, did in their early experiments. The x-rays did not kill the mosquito but weakened the sporozoites in the saliva so they could not multiply once they got into the new host.

When the mosquitoes were unleashed on mice, the results were promising. “Mice and then monkeys,” Ruth says, “and it worked.”