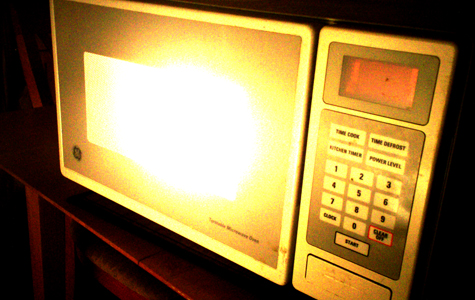 Littered across the Internet are dozens of home videos of people putting a lit match into their microwave oven, turning it on and waiting for the inevitable chaos to ensue: a spitting, sputtering ball of brilliant white fire that seems to hang magically in the air until it floats upward and scorches the hell out of the microwave ceiling.

Some of the mischievous miscreants responsible for turning their kitchens into science experiments claim to have recreated a mysterious natural phenomenon known as “ball lightning,” which resembles the fiery spheres created in the microwave and is thought to be the byproduct of lightning strikes. But are these glowing orbs created in an appliance normally reserved for reheating leftovers really the same thing as ball lightning?

Several scientists in the relatively small field of “ball-lightning-ology” say that it isn’t quite the same thing. “It’s not the same as the ball lightning that we are talking about,” says Antonio Pavão, a professor of chemistry at the Federal University of Pernambuco in Brazil who has successfully created a ball lightning-like phenomenon in his lab.

Reports often describe naturally-occurring ball lightning as a luminescent white-blue or white-orange ball, which is, on average, about the size of a grapefruit. It can move through the air on its own for seconds and even minutes, bouncing off most things it touches until it either fades away or explodes. Sightings are reported most often during thunderstorms when lightning actively strikes the ground. Not to be taken lightly, ball lightning has reportedly even killed people.

But until recently scientists did not take the phenomenon very seriously, and some did not even think it existed at all. Several theories were floated around to explain the mechanism of ball lightning, but only one has gained ground in recent years. It was proposed by John Abrahamson and James Diniss, professors of chemical engineering at the University of Canterbury in Christchurch, New Zealand.

The inspiration for their theory was the glass-like globules of silicon, called fulgurites, found in the ground after lightning hits silicate-rich soil (silicates are compounds containing silicon and oxygen.) They proposed that, in addition to the formation of fulgurites, inconceivably small particles of pure silicon, smaller than 100 nanometers, were being vaporized and ejected out into the air during a lightning strike.

Once in the air, these silicon particles would begin to condense together and react with oxygen in the atmosphere, giving off heat and light and creating a fiery sphere of ball lightning.

A nice theory, but only in the last several years have scientists been able to verify it by creating something similar to ball lightning in the lab. For example, a group at Tel-Aviv University in Israel created a ball lightning-like effect by shooting microwaves at blocks of silicate. However, the effect only lasted for a scant 30 milliseconds once the microwaves were turned off.

More recently, Pavão’s research group in Brazil created a ball lightning-like effect that lasted anywhere from eight to ten seconds, which more closely mimics the behavior of the real thing. Pavão sent an electric current into a wafer of pure silicon, conditions strikingly similar to those of real lightning hitting the ground.

According to both Pavão and Abrahamson, the spectacle that you can create in your microwave oven is more like the Tel-Aviv University group’s experiment than actual ball lightning. Outside energy from the microwave is sustaining the fireball instead of internal chemical energy caused by reaction with the atmosphere. “The important difference is the lifetime of the balls,” says Pavão. “The natural phenomenon is different because there is no need for an additional source of energy and the lifetime is minutes.”