Both deadly and benign spore-forming bacteria's genes allow them to eke it out in extreme conditions. 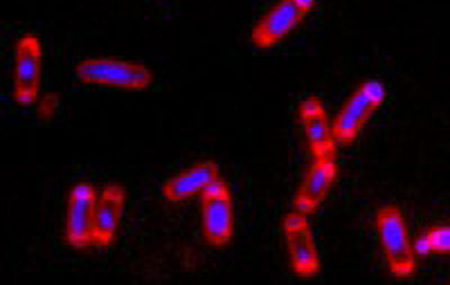 ** Editor’s Note: The staff of Scienceline is taking a short break to work on future stories. This article originally appeared June 25, 2008.**

The bacteria in the test tube are harmless, but boy are they stinky—a general swampiness with hints of manure, leavened with a moldy food funk. Lab workers retrieve vials of these foul-smelling, soil-dwelling microbes and then set about starving them.

But this cruelty on a microscopic scale has a purpose, and besides, Bacillus subtilis is a tough customer. The bacteria have a special method of survival—when under duress, they encapsulate themselves in protective shells called spores. By studying the genetic underpinnings of B. subtilis’ fortress-making abilities, scientists hope to be better armed against its dangerous bacterial cousin anthrax. In addition, analyzing the dynamics of spore formation may reveal more about the cellular mechanics of microorganisms in general.

Back in the lab, B. subtilis is out of food and begins to show off its bunker mentality by entering a process called sporulation. This undertaking produces a durable, spherical spore that allows B. subtilis to withstand severe dehydration, boiling, freezing and even high levels of radiation. The microbe can remain in this stasis indefinitely, waiting it out until conditions improve. Bacterial spores are so rugged there is concern they could survive on spacecraft and end up on places like Mars.

“They are the most resistant of all [known] living cells,” says Patrick Eichenberger, a professor of biology at New York University whose laboratory is dedicated to the study of B. subtilis.

This invulnerability makes spore-forming bacteria like B. subtilis and its relative Bacillus anthracis, better known as anthrax, notoriously difficult to wipe out. Take the case of the 2001 attacks on the Hart Senate Office Building: After the arrival of a couple of envelopes containing anthrax spores, it took months to thoroughly decontaminate the premises at a cost of about $27 million, according to the Government Accountability Office. Five people died and 17 were injured as a result of this still-unsolved biological assault. Cleansing of a nearby mail facility cost an additional $130 million and took over two years.

Any insight into how stubborn microbes remain safe behind their defensive shields would be useful in rooting out a future anthrax infestation. In fact, a 2002 grant from the Department of Defense initially funded the lab that Eichenberger now runs. “If we know more about what makes subtilis resistant, then we know more about what makes anthracis resistant,” he explains.

Finding Answers in the Genes

Eichenberger intends to uncover the network of genes involved in B. subtilis’ spore-making ability. Besides aiding efforts to thwart bioterrorism, this research may help curtail more common infections from other spore-formers, such as Clostridium difficile. The scourge of hospitals, this bacterium afflicts one in five in-patients with diarrhea and can even cause death in elderly victims.

Though B. subtilis is among the most studied organisms on the planet, researchers understand relatively little about how the single-celled bacterium accomplishes the feat of sporulation. Once researchers have obtained a complete “assembly map” for spore-forming, drugs and chemicals could be manufactured to either halt the transformation or go after chinks in the bacteria’s armor, according to Eichenberger.