A recent study reveals differences in cardiac arrest survival on nights and weekends. 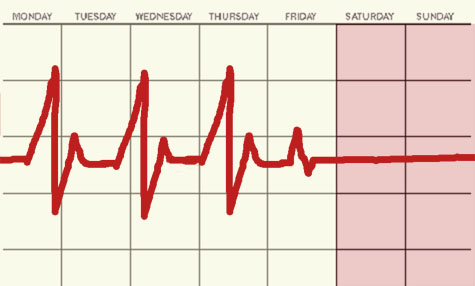 Having a nighttime or weekend cardiac arrest could reduce your chances of survival
[Credit: Molika Ashford]

When a heart stops beating it’s relatively unlikely it will ever start again, but there may be even less of a chance if it stops at a hospital on the evening or weekend.

A lower percentage of patients survive an in-hospital cardiac arrest if it happens during off-hours, according to a recent study in the Journal of the American Medical Association. Conducted by a consortium of physicians from U.S. hospitals nationwide, the study looked at nearly 87,000 separate inpatient cardiac arrests. It is the largest study of its kind to date.

While the report didn’t examine causes directly, the researchers posit that differences in staffing and staff training, health care worker fatigue and less surveillance by non-hospital staff could be possible reasons.

From 2000 to 2007, physicians from over 500 U.S. hospitals entered information about cardiac arrests into a national database sponsored by the American Heart Association. These data indicated that patient survival was consistently lower at night and on weekends. Patients that arrested during the day and early evening survived to be discharged from the hospital about 19 percent of the time, compared to around 15 percent at night. On weekdays, survival to discharge was near 21 percent versus close to 17 percent on weekend days.

Although the study was not specifically designed to determine the cause of any differences in survival rates, Peberdy points out that nights and weekends are less desirable shifts, which may lead to having “less trained and experienced” people on staff. The study authors also point to “decreased physical and psychological performance” of health care workers and less overall patient surveillance by staff and visitors during off-hours.

In a study published in the August issue of the journal Resuscitation, Peberdy’s group found that the emergency room also had higher overall cardiac arrest survival rates. They speculate emergency room staff may receive more advanced CPR training and have more practice performing resuscitations than staff in other hospital wards.

Peberdy says the results of these studies should be more useful to hospitals than individual patients. Dr. Martha Radford, cardiologist and chief quality officer at New York University Medical Center, agrees but says the hospital a patient chooses can change the likelihood of an in-facility cardiac arrest. “Hospitals that have a 24/7 house-wide intensive care capacity have seen a drop in [general hospital floor] resuscitation events,” says Radford.

In addition, she says patients can look for hospitals that allow families to call in such an intensive care team if they see symptoms forewarning an arrest, such as shortness of breath, rapid breathing and a lack of mental alertness. “Eighty percent of [patients] show symptoms of having a cardiac event before they actually do,” says Radford.

Does exercise have the same effect on heart rate as the fight-or-flight response?

The return of Dr. House.