NFL Roots for the Environment

With the Super Bowl approaching in a fury of clashing helmets and diving tackles, the National Football League hardly conjures up a sensitive image, but sensitive is what the NFL […] 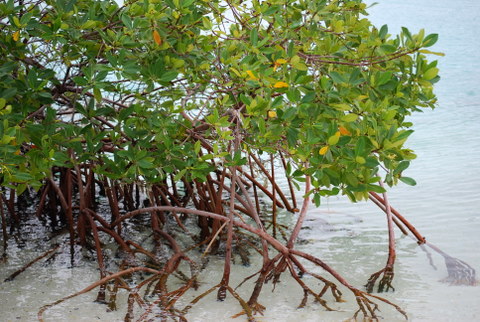 Mangroves brought to you by the NFL. The Superbowl offsets carbon emissions by restoring mangroves in Florida. Red mangroves, like these taken in the Turks, are vital to coastal ecosystems. [Credit: Lindsey Konkel]

With the Super Bowl approaching in a fury of clashing helmets and diving tackles, the National Football League hardly conjures up a sensitive image, but sensitive is what the NFL aims to be – environmentally sensitive.  As a carbon offset for Super Bowl XLVIII, the NFL is funding the planting of 700 mangrove trees in Terra Ceia, Florida about 40 miles south of this year’s Super Bowl City, Tampa.

Mangroves, shrub-like trees that grow in brackish waters in the tropics and sub-tropics, are an integral part of the coastal ecosystem, providing breeding, feeding, and nursery grounds for a wide variety of fish, shellfish, birds, and other wildlife.  An estimated 75 percent of all game fish and 90 percent of commercial fish species in Florida depend on mangrove ecosystems for survival, according to Rachel Arndt, a coordinator for Tampa Bay Watch, the organization responsible for planting the NFL trees.  Mangroves, which have extensive root systems, also stabilize low-lying coastal plains against storm surges and erosion.

620 of the 700 mangrove trees were planted last month along the Terra Ceia shoreline, said Arndt, who noted that the rest of the trees are scheduled for planting by January 10, in plenty of time for the Super Bowl.  Unfortunately, with the league gearing up for the playoffs, no members of the NFL were present at the plantings – perhaps they should have sent the Detroit Lions.

Correction (Jan. 9, 2009):  The photo caption was changed to clarify that the pictured mangroves are in the Turks, not in Florida. Those pictured and those in Florida are the same species.

Does sonar harm whales and dolphins?