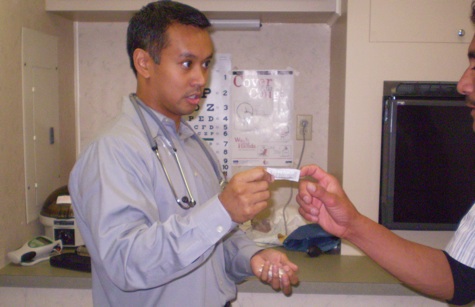 Ellery Tarife treating one of his patients on the mobile MedVan [Credit: Natalie Peretsman].

“The difficulty is, I probably need a bed and some rest,” says David Higgins, who is concerned about a persistent cough. He thinks it’s bronchitis that might turn into pneumonia. Next to him on the exam table is a travel bag holding all of his possessions.

A bed and some rest are real difficulties for Higgins, who is homeless.

Ellery Tarife, a nurse practitioner, asks a round of questions. Drink? Smoke? Difficulty breathing? How’s your appetite? Where are you staying now?

He hands Higgins some cough syrup and tells him to come back next week to check on his symptoms. A delivery of pneumonia vaccines will have arrived by then, too.

Sliding off the exam table, Higgins says, “I’ll be back for that vaccine next week,” and heads toward the door.

Two steps lead down from the door onto the sidewalk in front of Trinity Church, which houses a soup kitchen in Manhattan’s East Village. Tarife spends two hours parked by this sidewalk every Wednesday before moving on to another homeless hangout. His “office” is the MedVan, a mobile clinic that constitutes one branch of services provided by the organization Project Renewal, whose goal is to help homeless people turn their lives around.

“[The MedVan] is a different health care delivery model,” says Tarife, 32. “Our idea is to get [homeless people] healthy. We know they have all these other things going on [like] addiction and mental health [issues]. By giving them what they need, putting it right in front of their face, we’ll hopefully steer them in the right direction.”

Traveling clinics like the MedVan use their mobility to reach people who may not otherwise access professional help for health problems. The van’s two fully equipped exam rooms and electronic record-keeping system provide the basics for primary care services. And the mobile delivery model removes the hurdle of the first step of getting help. Among the first of its kind, MedVan started making stops in 1986 and now serves about 2,000 people per year at 15 different sites in New York City.

The homeless have more health problems than the general population, according to the National Coalition for the Homeless. Sleeping on the street in rain or shine and digging into empty pockets to pay for food, not to mention health care, are part of the reason. Drug addiction, alcoholism and mental illness are serious contributors, but small things also make a difference. A refrigerator to store medicines, a calendar to mark appointments and of course a bed to rest on are often out of reach.

Diane Martins, an assistant professor of nursing at the University of Rhode Island who has studied the homeless population, says that besides these obvious barriers, homeless people have a negative perception of healthcare. Their views make them less likely to seek medical attention. To get care, their first choice is often the emergency room, for lack of insurance and money. But from their prior visits, says Martins, they arrive with an expectation that they will be pushed aside or ignored or will feel the burning stigma of being homeless. So they wait out discomforts until a wound becomes puffy and infected, for example, and their health declines.

On the MedVan, Tarife attempts to break some of the barriers. The mobile model answers the question of accessibility, and funding from both private and public sources, such as the New York City Department of Health and the Ryan White program, covers costs for patients without Medicaid.  Aside from removing the financial burden, the MedVan makes an effort to be a welcoming environment for its patients who have had negative experiences with healthcare in the past.  Building relationships is key to the clinic’s success.

It may take three or four chats for Tarife to form a connection with a patient. John Conry, a MedVan pharmacist and an associate clinical professor at St. John’s University, says that Tarife’s ability to listen goes a long way. “He wants to hear their story first. And then once he does, he really tries to relate to the patients and always tries to pick the best therapy given their specific lifestyles, and without judging them,” says Conry.