Faking Cleverness and My Week of Nobel Laureates

Eric Kandel has a gulping, throaty laugh, the rare kind that sounds like a goose might if it could honk as it inhales. It’s contagious, not just because the sound […] 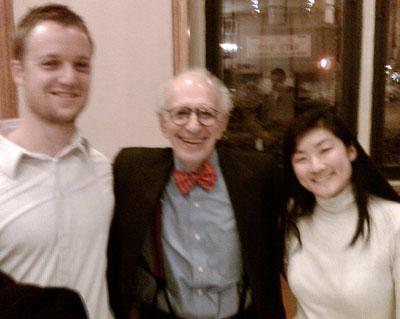 This blurry group photo is courtesy of a cellphone, taken at the 92Y in Manhattan Jan. 29. Left to right: Robert Goodier, Eric Kandel, Jeanette Chang.

Eric Kandel has a gulping, throaty laugh, the rare kind that sounds like a goose might if it could honk as it inhales. It’s contagious, not just because the sound of it makes you laugh, but because of its luminosity and the apparent joy of the man who is guffawing. Last week, I watched the neuroscientist who won a Nobel Prize for deciphering how memories are made laugh on screen throughout a feature-length documentary of his life and work. From a corner near the front row of the audience, he watched, too, and echoed himself loud enough for the rest of us to hear.

Kandel’s smile is practically the lead in the film, called “In Search of Memory” (now in search of funding for a debut in American theaters). I expected a graver demeanor, or more sedate, to conform to my acclaimed-scientist stereotype. But he even maligned in a funny way the kind of person you would think he might want to emulate: those with sharp memories.

“I heard of memorists and Talmudists who know every word of the Babylonian Talmud and I was delighted to learn that they are miserable,” he quipped. That was in an interview with Oliver Sacks when the lights were raised at the 92Y in Manhattan.

The film’s plot hinged on Kandel’s personal narrative as a Jew in Poland who fled to Brooklyn ahead of the Nazi atrocities and his dogged search for the thing in the brain that makes memories. That search was portrayed by scientists harvesting cells from sea slugs.The cells interact and their synapses fork toward each other like living lightning.

I had a question for him about consciousness, but I figured there’s not much he could he say. If he had insight into the biology of who we are – the thing that harbors our inner worlds, I guess – then he would have gone public by now, clearly. But maybe he had a theory (like one of these). Maybe I could phrase the question in a way that wouldn’t sound too silly. I lingered after the book signing, saw the group photos, his grandchildren better than I did at their age. I heard his laughter and rehearsed my question over and over.

Before I spoke, I should have met Roald Hoffman, the other NobelPrize winner I saw in my week of laureates. His is in chemistry. I met him four days later when he spoke about his Science Cabaret to a crowd of journalism students and scientists at New York University. He squirmed as he recalled, he clasped and unclasped his hands, he let some feeling overcome him, he leaned forward in enthusiasm, collapsed backward when he struggled to define his art. He is a poet.

“The world opened up in poetry,” he said, probably squeezing his hands between his knees or squirming somehow.

Besides international acclaim, he shares some things in common with Kandel: he is also Polish and Jewish and touchingly defies stereotypes.

“This is the way the world should be – you should talk about science and have music around,” he said about his cabaret. He read two of his poems, one, from his collection Soliton, about relationships symbolized by tsunamis passing through each other unperturbed.

That night he reminded me of something about language. While berating his colleagues for spurning metaphor in research papers, he said, “People want to make themselves more clever than they are.” Hence, the research papers stripped of the stories, symbols and images that led to the discoveries in the first place. Just data. Numbers. No anecdotal tangents and certainly no rhymes. Metaphor motivates action and ideas in science, he said, but it is scrubbed out of the final product. He was probably shifting in his seat, when he said that, too (but my eyes were on my notepad).

The question I finally asked of Kandel was wordy, freighted with reference to biological infrastructure and other buzz killers, and I was nervous, probably hoping I didn’t sound too uninformed. He cocked his head about halfway through my ramble, and when I finally finished, he said that yes, he had some ideas about consciousness. In fact, he had written about it for the journal Neuron, and it should come out in a year and I should read about it there.

If I had met Hoffman first, though, I might have trashed the talk about infrastructure. I might not have tried to make myself more clever than I am, and I might have have just asked him something like, “Now that memory’s checked off, what do you think about consciousness?” And then he would have given the same answer, but in a much cheerier mood, and we would have had an air-sucking belly laugh over it and then left.

Some researchers are making connections between marijuana and memory.

Can our brains play music?