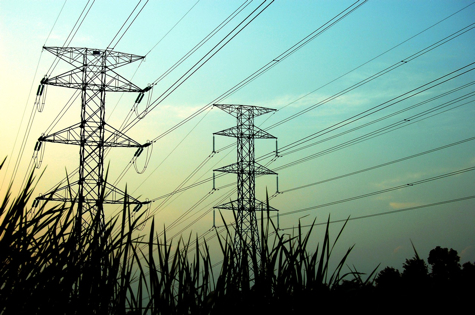 New software from Google combined with smart meters in homes could lead people to decrease their
demands on the power lines [Credit: Ian Koh, flirckr.com].

Suppose that each month, the bills that arrive separately in the mail like unwelcome birds come home to roost are replaced by a single comprehensive statement. But not an itemized list of your purchases; instead, all your financial obligations for the month – the mortgage, the car payments, the credit card balances, the utility bills – are aggregated into one bottom line sum.

Utility bills are a microcosm of this. Each of the nearly 124 million household consumers in the U.S. uses an average of 935 kilowatt-hours and pays an average of about $100 for electricity every month, according to the U.S. Department of Energy. For most users, the monthly electric bill contains only those figures – total kilowatt-hours and total amount due. The bill is otherwise an impenetrable black box from which it is all but impossible to extract any useful information about energy consumption.

Enter Google. Having built an empire providing access to an ever-expanding universe of information, Google is betting once again that knowledge is power. Or rather, that a bit more knowledge about how our appliances behave will spur us towards reducing power consumption.

Google Foundation, the philanthropic arm of the search engine titan, launched its PowerMeter software last month, a product designed to pry open the black box of the utility bill and give consumers direct access to information about how their homes use electricity. Paired with the next generation of high-tech electric meters, like those built by General Electric and deployed at the 2008 Beijing Olympic Games, Google’s software enables users to interpret a constant stream of data about their home’s energy use, identifying wasteful practices and shining a glaring spotlight on energy-hogging appliances.

“We think that people will cut around five to 15 percent of their energy use just by having the information,” says Google spokesman Jamie Yood. “If half of American households cut their energy demand by ten percent, it would be the equivalent of taking eight million cars off the road.”

Delivering this information to even half of all U.S. households will require a large-scale retrofit of more than 60 million residences. The conventional electric meters currently in most homes only measure the total number of kilowatt-hours used, but PowerMeter can only work in tandem with so-called smart meters – systems that monitor energy consumption by regions of the house, even by individual appliances, and stream the data wirelessly back to utility companies. PowerMeter taps into that data stream, routing information to homeowners’ computers and delivering real-time graphic analysis of electricity use. While only 200,000 residences in the U.S. have smart meters so far, another 40 million are slated to receive the upgrade within the next three years, according to the Obama administration’s American Reinvestment and Recovery Plan, which was approved by Congress in February.

But some experts say that simply having the sort of information PowerMeter provides does not necessarily lead to reduced consumption.

“The thing you tend to see most often with households is not a change in use, but a rearranging of use,” says Stephen Hammer, director of the Urban Energy Program at Columbia University. “They simply rearrange – they don’t run the washer or dryer in the afternoon, they do it in the evening or overnight, when it’s less expensive to do so.” Residential and commercial demand for electricity spikes during daylight hours, straining power plants; as a consequence, utility companies charge less during off-peak hours.

Even if Google’s projections of a ten to 15 percent reduction proves correct, the impact, Hammer says, would probably be small. If all the 2.5 million residences in New York City reduced their electric use by ten percent, the effect would amount to about half the output of the small power plants known as peaking plants – facilities that operate only during periods of highest demand. This represents a small fraction of the city’s total energy needs. Still, Hammer says, the localized effects of taking production plants offline should not be overlooked.

“So what are you saving overall? Not much,” he says, “but if I lived in those neighborhoods [where peaking power plants are located] and you could tell me that one of those had to operate less often or we could actually eliminate one of those, the localized particulate [pollution] effects would be significant. I think the people who live near the power plants would probably argue that getting rid of one or more power plants is a pretty good thing.”

Still, Google thinks the potential for real household savings should not be discounted. “By monitoring my energy use,” writes a Google engineer who has been beta-testing PowerMeter, “I figured out that the bulk of my electricity was caused by my two 20 year-old fridges, my incandescent lights and my pool pump, which was set to run more than necessary. By replacing the refrigerators with new energy-efficient models, the lights with [compact fluorescent bulbs] and setting the pool pump to only run at specified intervals, I’ve saved $3,000 in the past year.”

Harnessing wind power in the city.