A new brain imaging tool may show us how our brains work. 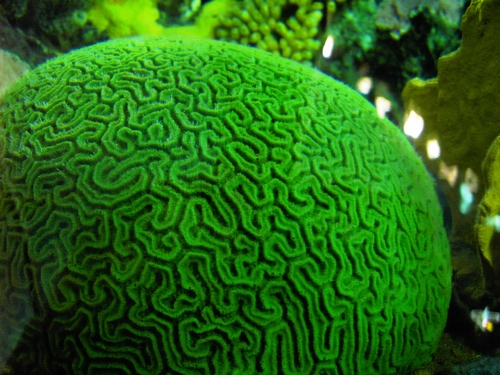 This coral's green fluorescence may some day color brain cells as they fire and revolutionize how scientists see the brain [Credit: Sarah Spaulding, flickr.com].

The brain is a dark place and what goes on inside is frustratingly stealthy. From ideas and emotions to preferences for, say, cheddar over Gouda, it is tough to see it at work even with brain imaging scans. Thoughts flit like ghosts along electric and chemical highways from neuron to firing neuron, offering few signs of their passing. The paths they pick are dark, silent and colorless. If only exploration under the scalp could be a little more like adventures underwater, where life on the coral reef oozes a full, weird palette that advertises its comings and goings.

Now, neurologists with scuba tanks are linking the two worlds trying to create tags for neurons — tags that would glow green when the neurons fire. They harvest fluorescent proteins from sea life and alter them to glow when they sense electrical currents like those in the brain and nervous system. If successful, the same green glow of some corals, sea anemones and one species of jellyfish could ink the paths that thoughts take as they skitter across the human brain. If it works, this biological paint would revolutionize neurobiology and open doors to fantastic and even unsettling technologies. Some have suggested we could one day use these signals to harness thoughts to machines or detect a mistake before we make it. If it works. Thus far, the hurdles are high and progress has been won with little more than guesswork.

“If it works, it’s the next tool of choice. It will move the entire field forward,” says Thomas Hughes, a biophysics professor at Montana State University. Hughes’ laboratory is one of several devoted to inventing the voltage-sensing tags. They reviewed some of the latest advances in August of last year in the journal Brain Cell Biology.

The goal of Hughes and his ilk is to do nothing short of revolutionize how we see the brain — to make brain voltage visible. Neurologists can detect firing neurons only where they have inserted electrodes. Animals like monkeys often serve as proxies for people in brain experiments, and electrodes are dipped into their brains through holes bored into the skulls. Occasionally, human brains have been probed as well, usually during brain surgery. Electrodes that are stuck to the scalp are used for electroencephalography, or EEG, and can only measure the average electrical activity of whole brain regions. On the other hand, electrodes that penetrate the brain map streams of electricity in a piecemeal way, recording pinpoints of activity if neurons happen to fire nearby. It is like trying to observe the ocean when you can only see the movement of a few buoys and not the water itself. Brain scans taken during functional magnetic resonance imaging — fMRI — reveal the shifting currents of blood flow, but not electrical activity. Blood may drift toward clusters of firing neurons while the routes the electric signals take remain mysterious.

“A big problem in the field is the inability to monitor lots of cells at once to get a big picture,” says Vincent Pieribone, neurobiology professor and diving aficionado at Yale School of Medicine. “We want to follow the connections to see how they work.”

Pieribone aims to colorize gray matter. To do so, he and the other green brain pioneers paint voltage sensors with green dyes. Their work is in Petri dishes. The dyes are proteins plucked from the creatures that glow green, and the voltage sensors, called ion channels, are gateways in all living cells that open and close when they are zapped. When the two are combined, scientists hope the sensors will flip open and glow green when they detect electrical currents, then flip again and hide their green tags when the currents pass. If many of them were sprinkled throughout the brain they would act like breadcrumbs along the dark trails of thought.

The path sprinkled with breadcrumbs, however, is still just a fairy tale. Among the many hitches in the project, one problem is how to deliver the sensors to the neurons. The most promising idea thus far has been to piggyback them on a modified version of HIV, the virus that causes AIDS. In theory, the modified virus would slip into cells with its payload of green-glowing proteins, but it wouldn’t be able to cause an infection or neuronal nastiness like dementia that is associated with HIV. Even so, as Pieribone drily points out, if HIV is in the mix, it will be difficult to convince people to sign up for test runs.

Another confounder is that it is not clear how ion channels work, or how they are best fused with fluorescent proteins. So far, the best progress has been made with lucky guesses. Early efforts, first reported in 1997, were labor-intensive, requiring deliberate insertions of fluorescent proteins into chosen sites in the ion channels, yielding results slowly.

“There are probably about 100 ion channels and 100 green fluorescent proteins and 500 places to insert them, so the variations are endless,” says Pieribone. Then, embracing their ignorance of the materials, Pieribone’s laboratory sped up the trials and errors by randomly inserting the proteins and testing whatever came out.

“We’ve made lots that work, but not good enough,” he says. He is building on the limited success they have achieved, trying to amp up the ion channels’ slight ability to fluoresce.

“They’re not ready for prime time,” Hughes says. “We need to make one with a large change that a neurobiologist could see with a microscope. We don’t need a one percent change, we need a 30 percent change. And we’re not there yet.” It’s also not clear how these would be used in a living brain except possibly in animal brains with the skulls removed or in the brains of surgery patients.

Colorful tags are well-known in research now, but since they are not hooked up to ion channels like the tags in brain cells, they do not react to electricity. Tags illuminate the inner worlds of cells, the shuttling of molecules and the fluttering filaments that brace the cell’s membranes have transformed cellular biology, allowing the eye to see what was once only theoretical or even inconceivable. The tools were put on a pedestals among science’s greatest implements last year when they earned a Nobel Prize in Chemistry for three of their creators, Osamu Shimomura of Boston University, Martin Chalfie of Columbia University and Roger Tsien of the University of California, San Diego.

The work underway now to make those tags respond to electricity or other changes could lead to the development of thought-directed tools for people with paralyzed or missing limbs. Once neuronal pathways are mapped, the thoughts that would normally move a limb could be detected in the minds of paralysis victims and translated into commands that move a computerized wheelchair or even a robotic arm.

Further off still is the possibility of monitoring people’s thoughts while they perform tasks and catching errors before they are committed. Exploiting the lag time of milliseconds between the thought of taking an action and the actual action, theoretically, thought monitors could warn of mistakes before they are made. Regardless of future applications, many of which sound like science-fiction fodder, these early steps in the creation of a fluorescent voltage sensor could transform our understanding of what is in our heads.

Speaking from the Brain: A psychology researcher explores how children develop language skills.