Cooling down with Craig Heller

"The glove" is poised to help NFL athletes recover faster 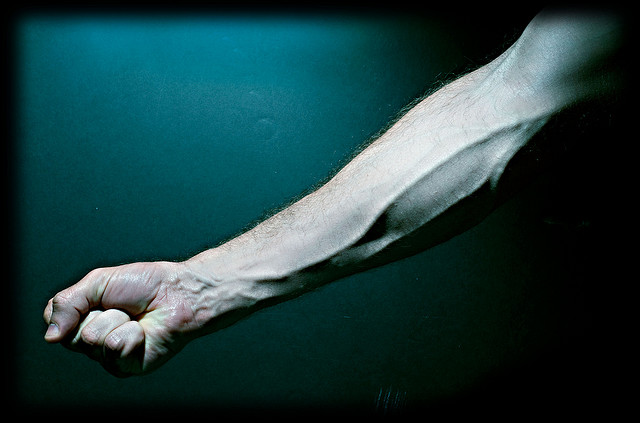 By cooling your hand, "the glove" can reduce muscle fatigue in athletes. [Image Credit: davco9200, via Flickr]

“Should attempts to advance the technology of sports equipment be a wide open race to build the best? Should such equipment be allowed to drive world records? Or must rigid standards be imposed to ensure fair competition?”

As preparations for the 2012 Olympic games become increasingly competitive, the unbounded technology race continues to shift the focus from athlete to machine. Improvements in cycling, archery, kayaks, fencing swords and lighter javelins have allowed athletes to shatter world records largely in part to improvements in technology.

I have always liked to think that the greatest athletes have something intangible — an unmatched skill or innate ability to push their bodies beyond what is considered normal, beyond what any technology could allow the rest of us to do. The gap between good and great athletes does seem to be shrinking, and at what point will those with the most money or resources surpass those with only the ineffable gift?

But this blog is about science, not ethics. Despite my personal opinions (which will undoubtedly influence its content) I am going to focus on the science — on the latest developments, improvements and innovations in sports technology. What are they? Where are they coming from? How do they work? Do they actually work? Who’s using them?

To get things started, I revisited an older device that’s positioned to gain widespread NFL acceptance soon, according to its designers. It’s been more than ten years since Craig Heller, a biologist at Stanford University, and his colleague Dennis Grahn developed the first prototype of “the glove” — a cooling device that drastically lowers the body’s core temperature, allowing athletes to recover quicker. I got the chance to talk to Heller about the development of this remarkable device — currently used by Stanford football team and the San Francisco 49ers — to see what the future of the glove holds beyond just sports performance.

Q: So how exactly does “the glove” work?

A: Essentially we’re putting the radiator of a Mack truck into a Honda. The veins in our hands and the soles of our feet are arranged in a big network that’s very dense — when you shake your arm up and down your palm turns red quickly. The veins in your palm serve as a radiator — we’re just putting the radiator in a slight vacuum, enabling it to hold a bigger blood capacity. Inside this vacuum-like glove blood is pulled into the palm, where it is cooled by grasping a closed system of circulating water (scroll down in this article for a good image) before returning it to the heart.

A: If you think of a mammal, it’s covered with fur and doesn’t lose heat very well. Its vascular structures are on the non-hairy parts of its body. We’ve inherited these same blood vessel traits — our palms, the bottoms of our feet and portions of our face contain special blood vessels that go directly from arteries to veins, called arteriovenous anastomoses. You can tell right away whether these “gates” are open or closed when you shake someone’s hands, it’s either hot or cold. None of our other body surfaces are this way; we don’t have this variable capacity for heat loss except on these non-hairy skin surfaces.

Q: How did “the glove” fall into sports?

A: It was originally developed for the exact opposite purpose — rewarming patients from anesthesia. When we realized that what we were exploiting were mammalian adaptations for heat loss (we were just driving them in reverse) we found that muscle fatigue is largely due to the rise in temperature of the muscle. If you can take that heat away effectively, you can extend the capacity of the muscle for greater aerobic and anaerobic activity. By reducing muscle fatigue, the muscles can work longer and athletes can greatly extend their endurance.

Q: Are there any adverse effects — can you train too hard with the glove?

A: Overtraining can always be adverse, but you can overtrain in any type of situation. There’s no inherent danger with the glove — as a matter of fact it prevents adverse effects of heat. Every year there are lots of individuals that enter into heat stroke and even die during training, so what you’re doing with this device is just enhancing recovery — keeping people closer to their normal range.

Q: Have there been any improvements to the glove?

A: There will be a new version coming out early next year; it’s in the final development stages now. The biggest difference is that it will be about one-fifth the cost (down from about $4,000.) The first time you produce something it’s usually clunky and unnecessary. The biggest problem with the previous device was the seal around the wrist — it wasn’t robust, it was made from latex — and that’s being changed and improved. Overall it will be a better device — fewer working parts, a simpler design, lighter and easier to use. We are also prototyping a wearable version of the glove — something that is a form fitting (like a bike glove) that could run off a camel back so endurance athletes, firefighters or military personnel could wear it continuously.

A: We are just now publishing a manuscript that shows the effects of the glove on strength conditioning. Whereas before the glove was primarily used for recovery, our new research shows that with strength conditioning it produces results much better than steroids. National strength and fitness committees want alternatives to steroids or performance enhancing drugs, so hopefully they will embrace the glove.