The rest of Guernsey's story 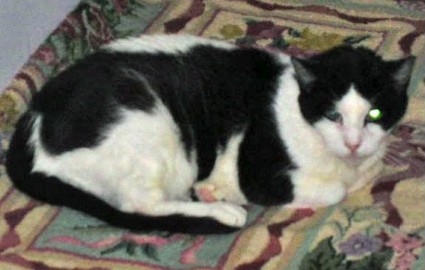 Guernsey in his new home in Queens. [Image Credit: Courtesy of Paula F.]

Read more in Guernsey of Bergen Street: Life of a Brooklyn street cat.

Guernsey, the favorite of the feral cats that lived in a lot in Park Slope, Brooklyn, lived out his last year in a home. That is to say, he died on September 13, five months after a woman from Queens adopted him.  He was maybe 14 — old  for a street cat.

Guernsey did not die in the cold of winter. Nor did he die a slow indoor death, refusing to eat and wasting away.  Kidney failure brought him to the vet, and a lethal injection killed him quickly. He was cremated, and his caretakers will decide what to do with his ashes.

No one knows where Guernsey came from. Though not cuddly, he was the friendliest of the cats in the lot, where he and the other cats lived under the kind, blind eye of the lot’s owner. Al, who lived near the lot, fed Guernsey twice daily for something like eight years. He and his wife, Martha, wanted to find an indoor home for Guernsey, because they could see that he was declining, but they didn’t take him in. They did not want to bring a street cat into territory that their three indoor cats had already divided. So instead Simone, an animal activist in the neighborhood, posted an online ad saying that Guernsey needed a home. Paula answered the ad, and in mid-April, Guernsey moved to Queens.

At the end, Guernsey was just getting used to domestic life — and that’s an optimistic description. He came out of his closet hiding place and stood in the corridor. But he only let Paula pet him after he got sick. Before that, they say, Al was the only person who could pet Guernsey or pick him up, though that would be easy to disprove; Guernsey had many friends on Bergen Street.

After Guernsey left the lot, a construction project commenced, and the gate was hung with black netting. Building permits appeared and a sign saying that an effort had been made to clean up the construction site, that the New York City Department of Health had issued a violation and “expect[ed] no food to be left for our cat friends and rodents to feed on.” When Guernsey died, Simone tied flowers to the gate and put up a sign to tell neighbors what had happened. Someone else added a candle. Al still feeds the cats.