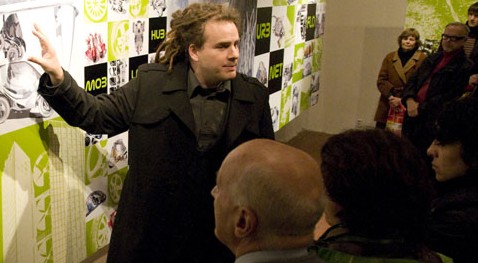 Mitchell Joachim wants to change the way we live, commute, and even sit [Image Credit: Terreform ONE]

How to Build a Living Machine

To get to the 7th floor workshop that houses Terreform, a nonprofit ecological design think-tank, one must navigate a cracked front door, a hall full of junk, and a creaky elevator. Though the Brooklyn warehouse looks like the kind of place where someone might be murdered, it’s actually the office of Mitchell Joachim, an architect turned mad scientist who spends his days creating new life. With an eye toward changing the landscape of urban design, the New York University professor constructs building materials out of living organisms.

Joachim, a well-built man who seems nondescript until you catch sight of his dreadlocks, has been on the cutting-edge of biosynthetics, the practice of manipulating living cells to make new materials. He helped found Terreform in 2006, and in 2010, their “meat house” concept, a prototype living space grown from pig skin cells, landed Joachim a TED Fellowship. But that was just the start. The point wasn’t really to construct houses out of pig flesh, Joachim explained, but to see if his team could coax cells into growing to fit the molds they made. 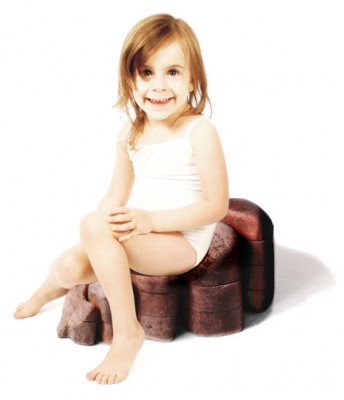 Joachim has since moved on to a new project – one that’s more marketable than a pork palace. Gen2Seat is the world’s first biosynthetic chair. Instead of being built, it’s been grown. The project harkens back to his childhood as the son of a furniture designer. “You’d have to be a moron not to understand a chair,” Joachim said. He waxes poetic on the evolution of chairs from the dawn of time, through colonial and mid-century fabrication, up to his own project, what he calls, “The third order of the Industrial Revolution.” With the first so-called revolutions being in factory production and the technological advances of the 20th century, Joachim sees the synthesis of biology and production of consumer goods to be the next great step. His chair is made from a new biopolymer of mycelium, or the tissue of mushrooms, and an acetobacter, a bacteria that produces cellulose. Blocks of mycelium are wrapped in strips of acetobacter that resemble fruit leather. Instead of just lying next to each other, the living strands fuse together. The mycelium feeds on the cellulose, allowing the two materials to become one before a deadly blast of heat locks them in their embrace.

The development of the material took place in two labs that Joachim and his colleagues built for a few hundred dollars. The open floor of Terreform is crowded with plywood, mismatched furniture, and scale models of cities both real and utopian. A side room holds two chambers that are a different sort of disorderly. Reminiscent of a well–worn school lab, the tables are jammed with foil-covered beakers and active petri cultures. All the equipment was either purchased on eBay or built from scratch. “Why buy one when you can make one? That’s how we roll,” said Joachim.

How did an architect end up in a homemade lab? Joachim speaks derisively about his Columbia education, which took place at the height of architecture’s deconstructivism  movement.  The movement’s goal was to create buildings as unique from classical designs as possible, but critics say the it shunned function and simplicity for pieces that seemed illogical and jarring. Joachim now laments that he and his fellow students produced “architecture for architects,” designing impossible-to-build concepts which were then critiqued using empty, grandiose language. “No one knew what anyone was doing,” he said. “We basically had our heads up our asses.”

Only many years later, while working for prestigious architecture firm Pei Cobb Freed, did he decide that architects should be solving real-world problems. And climate change seemed the biggest problem of all. He became obsessed, spending his days reading about ecology instead of focusing on his job. “I was bored shitless. So I changed it up.”

Now, after studying urban design at Harvard and a earning Ph.D. at the Massachusetts Institute of Technology, where his dissertation considered greener alternatives to urban transportation, Joachim is focused on ecological design that has a positive impact on the climate. Gen2Seat, for example, can be composted instead of thrown into a landfill. This, he feels, is the kind of work an architect is supposed to do. Despite his conviction that he now works in the real world, Gen2Seat will be one of Joachim’s first projects to move beyond the conceptual stage to mass production.

Maria Aiolova, fellow ecological designer and co-founder of Terreform, admitted that actual applications of Joachim’s projects have been few. But she thinks this is because the world isn’t ready for them. “The idea is more to set up the climate and inspire people,” she said, adding that Joachim’s talent lies in his “amazing ability to generate new ideas.” His priority is to educate a new generation of urban designers, or what he calls urbaneers. Tired of  “old, bearded white men” designing neighborhoods, Joachim hopes to turn the process into a roundtable exercise. He believes that people who live in communities are the true specialists when it comes to improving their architecture and design, and his group produces elaborate 3D models of the neighborhoods they actually want to live in.

But Joachim realizes that changing the way the world works isn’t as simple as building a 3D model. “We are consumers,” Joachim said. “The system is built that way, and it’s impossible to reverse.” Even though Joachim feels New Yorkers, especially after Hurricane Sandy, understand better than most that climate change is real, he and his colleagues feel the city has no desire to change.  Joachim says the hurricane wasn’t devastating enough to those who have the money and power to change the city. “Look at Pearl Harbor,” Joachim said. “Right after a massive crisis, we got our act together. It is possible for us to rise to the occasion. We will.”

Until then, Joachim will keep dreaming of a world where cities are green and all chairs are grown from scratch. When we’re ready for him, he’ll be waiting to rebuild the city for an era without waste.