Seeing through the eyes of an expert

What can we learn from the way experts see the world? 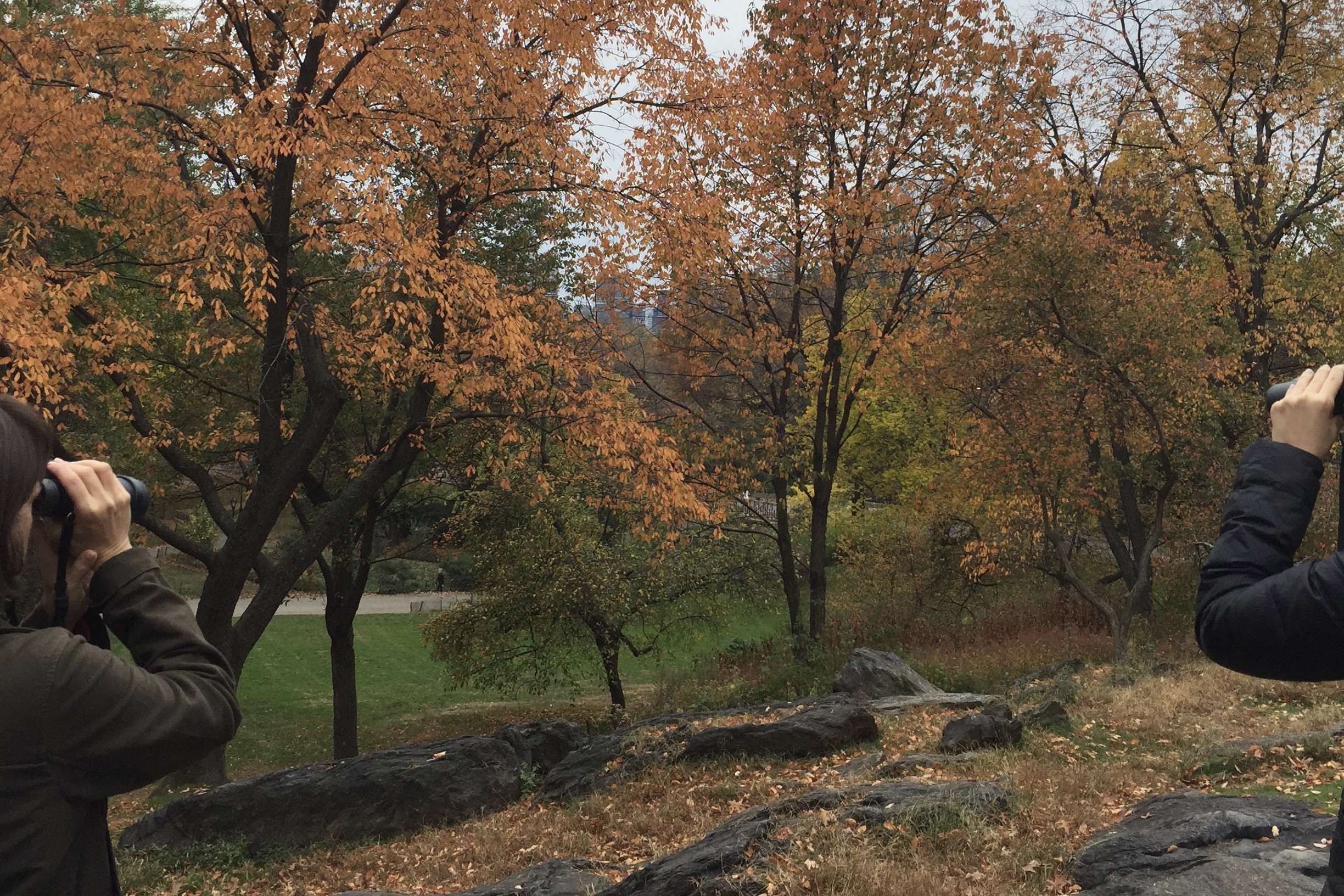 By any other name

PODCAST: Decrypting You on the streets of New York City

A dozen people are strewn across a path in New York City’s Central Park, some resting on benches, some standing. They crane their necks, peering into the highest limbs of a twisting pine silhouetted against the gray morning sky. Among its branches, one can barely make out a jittery black speck. Yet one man quickly identifies it as a white-breasted nuthatch.

These are birdwatchers. On Saturday and Sunday mornings, they gather at the Loeb Boathouse and wend their way through the park. The group passes through a variety of terrain, each with its own variety of birdlife: the hilly thicket of the Ramble, the evergreen expanse of the Pinetum, the open waters of the Reservoir. They stop intermittently to look and listen.

It’s a diverse crowd. There are men and women, some of them coupled up. There are local regulars and out-of-towners, including a pair from Brazil. And while the leader of the group, wildlife photographer Deborah Allen, is a seasoned birder, there’s a wide range of experience.

Take Chris, a slender, fresh-faced young man who’s new to birdwatching. There’s movement in the fall foliage. “Is that a house sparrow, or is it something better?” he asks.

After only two months of Saturdays with the group, Chris can identify the common birds of Central Park in more detail than most parkgoers. To the unpracticed eye, little birds are just little birds, but Chris knows the sparrows from juncos and starlings. And he’s getting better at identifying the local varieties, like house, song and chipping sparrows. He is developing perceptual expertise.

Perceptual experts are those who identify objects with more specificity than the rest of us. To an expert birdwatcher, it’s not just a gray bird; it’s a tufted titmouse. Psychologists are actively investigating how people develop and acquire perceptual expertise, as well as which visual features are most important to expert identification. This knowledge could have meaningful applications in areas ranging from early education to development of diagnostics—and even treatments—for diseases and disorders.

Perceptual expertise describes a behavior rather than a single brain function. So no two types of experts, or even experts in the same field, might process information in quite the same way. “It could be holistic. You could take in the whole object in one fell swoop and integrate information about it,” says Jim Tanaka, a psychologist at the University of Victoria. Or, says Tanaka, experts could be honing in on the most telling details of an image.

So psychologists are interested in the ways that different visual features are incorporated into expert identification. Information like color or image sharpness and level of detail. There are plans to study motion as well, says Lisa Scott, one of Tanaka’s collaborators and head of the Brain, Cognition and Development Lab at the University of Florida.

And although no young child would likely ever be considered an expert in anything, we might learn about adult expertise by studying the developing perception of infants. Scott began studying infants in their first year of life in an effort to explore the roots of face perception and found that they develop the ability to recognize faces very early on.

There are surprises in the ways infants process faces, too. For example, Scott has found that nine-month-olds were better at recognizing faces of people from their own race, while there was no such discrepancy in six-month-olds. In fact, recognition of faces of other races declined in the older infants. This apparent specialization has been called perceptual narrowing.

Scott has also found that infants can be trained to identify objects at a finer level of specificity, their own form of perceptual expertise, by being read to out of specially designed picture books. Simply labeling pictures at higher specificity drives an infant’s ability to later distinguish between images. The same effect is seen in adults.

So it appears that human perception is highly plastic. And this adaptability may be part of the reason for optimism in the research community for developing applications, including expertise training for adults, says Michael Tarr, who studies vision and cognition at Carnegie Mellon University, where he is the head of the department of psychology.

Scott is interested in applications to education prior to formal education. Because her research suggests receptiveness to specific use of language at a slightly earlier age than expected, Scott says it may be worth investigating if specific labeling could limit the effects of developmental disabilities, or promote reading at an earlier age. It might also underscore the importance of reading to children at a young age.

Perceptual expertise might also help save lives. Doctors at Northwestern University are working with Tanaka to develop training techniques to help medical professionals better identify melanomas, cancerous blotches on the skin. According to the National Cancer Institute, melanoma of the skin is the sixth most common form of cancer.

The current standard for melanoma detection involves checking off a list called ABCDE, a mnemonic for Asymmetry, Border, Color, Diameter and Evolution. The hope of introducing a perceptual expertise element to training is to improve early detection.

In many respects, the training resembles flashcard learning. Trainees are shown a series of images labeled with their proper designation, either melanomas or non-malignant lesions. The pictures are presented in a ratio that mimics real life. Preliminary results suggest an advantage from a blend of ABCDE diagnostic and perceptual expertise training compared to pure diagnostic learning.

Clinical applications of perceptual expertise may not be limited to diagnostic training. It goes back to face recognition. “Most of us are face experts. We’re able to quickly identify a face in a split second,” says Tanaka, “but kids on the autism spectrum aren’t so good at faces, so the question is: How do you train up face expertise in kids with autism?”

Tanaka has developed computer games that expose autistic children to repeated images of faces in hopes of improving their facial recognition and social skills. But there’s a big difference between incremental performance improvements in a computer game in the lab, and meaningful changes in social interactions outside. “The biggest challenge in lab training is the question of transfer,” says Tanaka. “You can train someone to become a lab expert, but how do they do in the wild? In the real world?”

Thus far there are no examples of training programs making explicit use of perceptual expertise that have made the leap from the laboratory to the field. But there may be hope still. Tarr says that the best training regimens, like those used by the military, are very sophisticated. They take advantage of some of the principles that psychologists have identified, whether they realize it or not.