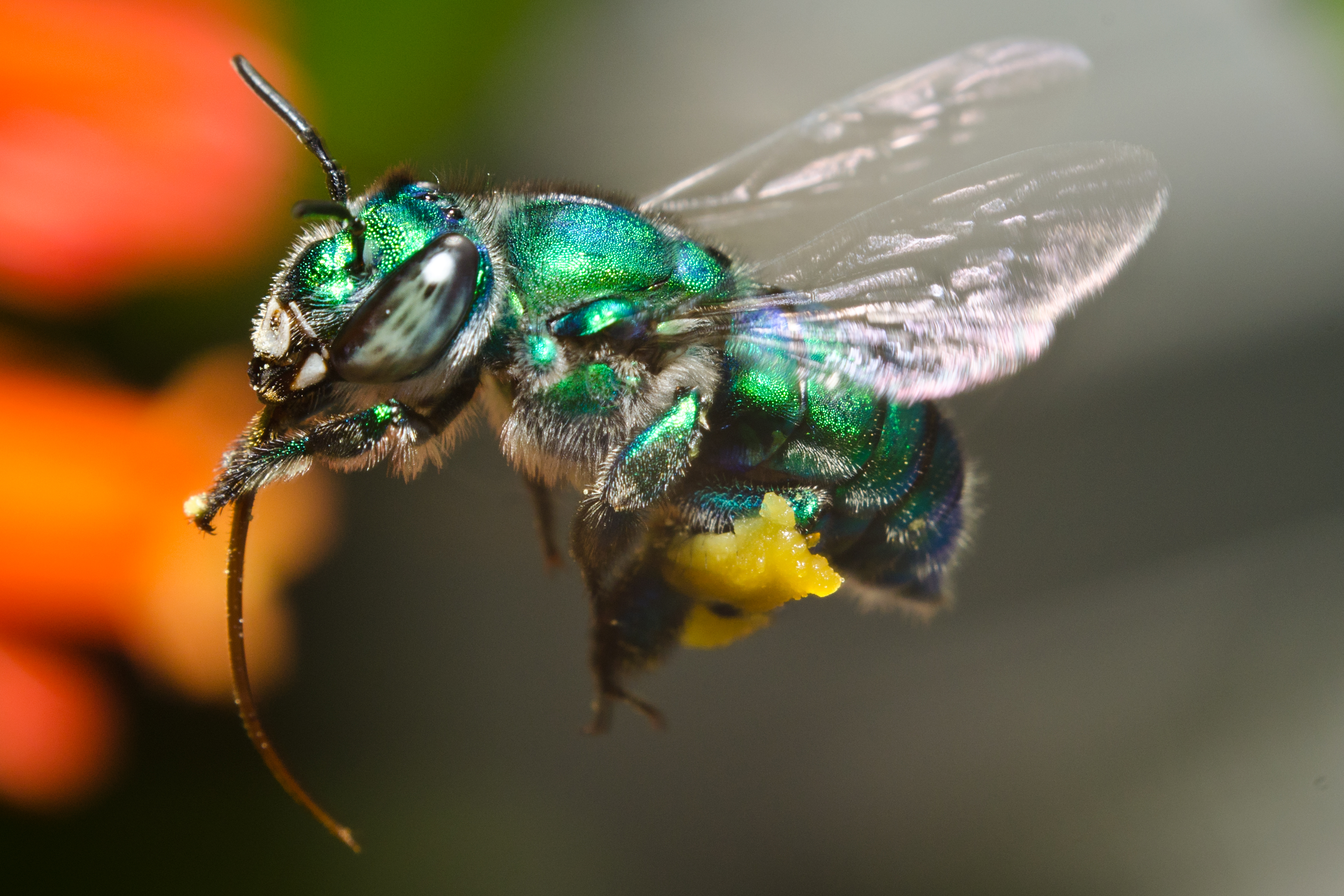 Their shimmering colors immediately set orchid bees apart, but they get the short end of the stick in their dealings with vanilla orchids. [Image Credit: Eframgoldberg, CC BY-SA 3.0]

A single bee, flashing an iridescent blue-green, flits toward a promising flower with showy white petals and a powerfully attractive fragrance. The bee wriggles its way deep into the orchid’s enticing center and extends a long tongue, intent on gathering a succulent prize that isn’t there. A moment later, it flies off again, unsatisfied but bristling with pollen. This flower, the vanilla orchid, produces no nectar. The bee has just been suckered into carrying out the flower’s dirty work — without getting anything in return.

The little orchid bee will be back soon; vanilla orchids are just too alluring to resist. But despite their success at fooling the bees, vanilla orchids are in a precarious position — they can only be pollinated by a handful of bee species. The bees, on the other hand, have a bountiful feast of nectar-producing flowers to choose from.

At a time when both orchids and bees are facing intense environmental threats, the vanilla orchids’ sly trick could prove to be their undoing, causing trouble far beyond the flower’s native Central and South American forests. Commercial vanilla, the world’s favorite flavor, is already the second most expensive spice due to the laborious hand-pollination required to produce the crop. But the price of commercial vanilla is soaring this year due to poor harvests on plantations in Madagascar and Indonesia, and experts are warning that the lack of genetic diversity in agricultural vanilla plants makes them vulnerable to a catastrophic disease outbreak. If that scenario unfolds, they warn, wild vanilla plants are in no condition to rescue their cultivated cousins because they’re reeling from their own problems.

For farmed vanilla, the worries are focused on Madagascar and Indonesia, where agricultural practices are primitive and the majority of the world’s commercial vanilla is grown, much of it stemming from a handful of cultivated clones that have been propagated for hundreds of years. “These conditions very much now lead to rampant disease,” says Pesach Lubinsky, a science advisor at the U.S. government’s Foreign Agricultural Service. Root rot, a fungal disease, is already rampant in areas of Madagascar’s crop, and once it’s there, it’s there to stay. Sharman O’Neill, a plant biologist at the University of California, Davis, says that from the point of view of the vanilla plants, the disease is a death sentence.

Most people aren’t willing to let vanilla die without a fight. While there are cheaper synthetic versions available, they can’t match the complexity of natural vanilla’s flavor. The future of farmed vanilla — used in dishes from ice cream to candied vanilla bacon — may depend in part on the complex and fragile interactions between wild vanilla plants and wild bees. And here’s the bad news for vanilla lovers: New research suggests the bees have the upper hand.

Like many orchid species, vanilla plants need orchid bees to spread their pollen and reproduce. But without nectar to attract the bees, vanilla orchids have evolved a way to game the system. They trick bees into seeing them as nectar-producing flowers and also offer irresistible scents for the males, who use the rich aromas to whip up a complex perfume in order to attract a mate. But the rules of the game are changing.

“Orchids are the more vulnerable,” says Santiago Ramirez, a biologist at the University of California, Davis who studies these bees. “We haven’t found any evidence that the bees really need the orchids for the perfume. The orchids need the bees for the pollination.”

It wasn’t easy for researchers to reach that conclusion. With hundreds of species of both orchid bees and orchids, figuring out which bees are being duped by which orchids is difficult. “It took us three years to figure out who pollinated whom,” says Ramirez. But the data is still incomplete, as up to 30 percent of all the bee species are still unidentified, according to an estimate by David Roubik, an ecologist at the Smithsonian Tropical Research Institute in Panama. “There’s still plenty we don’t have names for,” he says, even though he’s already named 12 himself.

Orchid bees behave very differently from communal honeybees. The females spend their time in solitary ground nests, emerging to forage for nectar and pollen for food, although occasionally they will begrudgingly take on a roommate or two. “Sometimes other females will stay there” too, says Roubik. “They usually don’t like that.” Typically, one female will eat the eggs of the other females in order to assert dominance. Roubik thinks the other females are simply biding their time. “What we think they’re hoping for is the dominant one will die and another female will be able to inherit [the nest],” he says.

The males are even less sociable. Lone wanderers, they spend their nights clinging by their mandibles to the undersides of leaves and their days covering vast swaths of territory looking for food and fragrance. “We actually detected individuals flying six kilometers in one day,” says Margarita Lopez-Uribe, an entomologist at North Carolina State University in Raleigh, referring to a radio-tracking study in which tiny transmitters were glued to the bees in order to follow their movements. The researchers chose Barro Colorado Island, the manmade island in the center of the Panama Canal, because they thought — wrongly — that it would keep the bees contained. “We were thinking we could easily track the bees there,” Lopez-Uribe says. “We had to use helicopters. What happened was the bees were leaving the island.”

Along their marathon journeys, male orchid bees stop by intriguingly scented flowers to gather their fragrances, which are actually aromatic powders. The bees store this powder in special pockets on their hind legs, according to W. Mark Whitten, a biologist at the University of Florida who has studied the reproduction methods of orchids. True to their name, orchid bees are drawn to the orchids for their intense fragrances, but they also gather scents from other flowers, tree bark and even fungi. 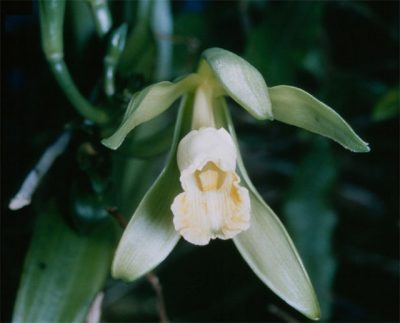 The orchid’s pollen is so valuable to the plant that it bundles it all in one package, meaning it gets just one chance to pollinate another flower, with the bee serving as the essential conduit.

Although the orchids and the bees seem to have settled into an unequal agreement, it may not last. Only two species of vanilla are used commercially: ­Vanilla planifolia and its close relative Tahitian vanilla. Almost the entire farmed crop comes from the same Vanilla planifolia clone.

This genetic homogeneity ensures a predictable product, but it carries great dangers, too. A classic example is the Gros Michel banana, a genetic clone that was once the most popular banana variety, now nearly wiped out by Panama disease. “It’s a question that’s out there” for vanilla, says Lubinsky regarding the risk of clones. The lack of genetic diversity doesn’t immediately herald danger, but it might if a pathogen can find its way through the vanilla plants’ defenses — a possibility made more likely thanks to boom-and-bust economic cycles and the tendency of some Malagasy farmers to neglect their crops when vanilla prices are low, leaving them to overgrow and allowing diseases like root rot to establish a foothold.

If that happens, farmers will likely have to turn to wild vanilla strains that can self-pollinate or resist diseases like root rot — but only if they can find them. Wild vanilla is vanishing across large swaths of its range, according to Pascale Besse, a vanilla researcher at the University of La Reunion, on the Indian Ocean island of Reunion.

Now found only in the Mexican states of Oaxaca, Veracruz and Chiapas, Vanilla planifolia continues to lose ground from habitat destruction as well as gathering by humans, for both private collections and commercial cultivation. Wild populations previously reported in Guatemala and Belize have vanished, and individual orchids in southern Mexico are often found several kilometers apart from one another in an increasingly fragmented forest landscape, making successful reproduction less likely.

Orchid bees are hardier, thanks to their broader tastes in pollen. There are more than 700 species, and for now at least, they seem to be doing just fine as long as they have forested areas, according to the Smithsonian’s Roubik.

Lopez-Uribe, of North Carolina State, has her concerns though. When surveying orchid bee populations, “if we go do a fragment of native forest, we can find communities of 20 species of orchid bees,” she says. “Go to an urban area nearby, you’ll only find two species, maybe a few others in low frequency.”

Which means that for vanilla orchids, the days of tricking bees could be drawing to a close soon. “The advantage these bees have, I think,” says Lopez-Uribe, “is the fact that they are capable of moving so much.” If the bees find they can no longer live in their current environment, they can just fly as many kilometers as it takes to find something suitable. The orchids aren’t so lucky, and they could be left behind.