The International Museum of Surgical Science 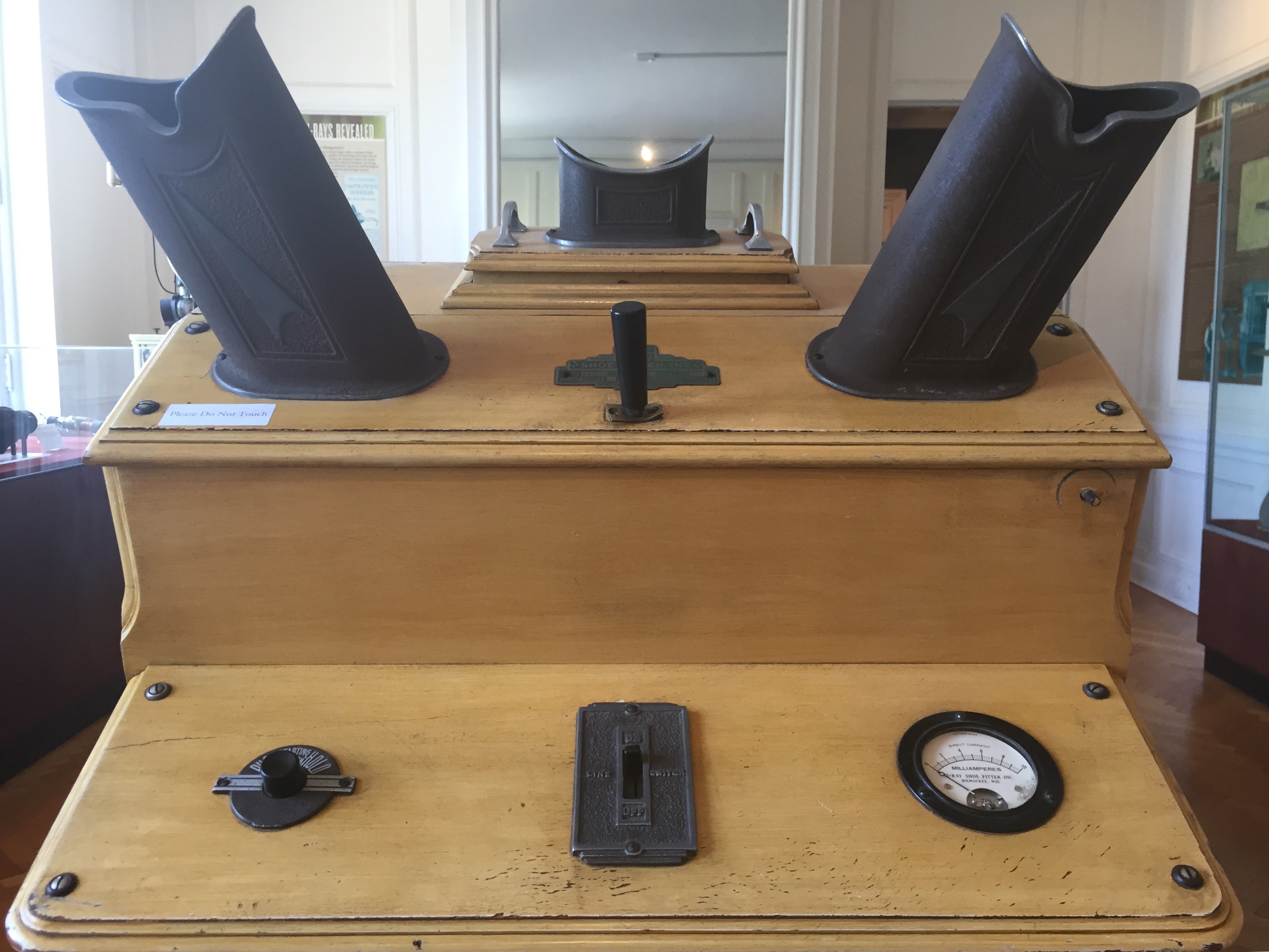 An x-ray shoe fitter, because why not expose yourself to X-rays while getting new footwear? [Photo by Leslie Nemo]

Sandwiched between two other blank, stone buildings, the International Museum of Surgical Science does not make itself obvious. However, like the buildings flanking it, it is one of seven historic mansions situated on Chicago’s Lake Shore Drive. One of its neighbors is the International Society of Surgeons’ headquarters. The other is the Polish consulate.

Beyond the front door, the plainness drops away to marble checkered floors and electric candelabras. Opulence is key — this was the home to the heiress of the strike-off match fortune, after all. But now, instead of soirees and social calls, the mansion is filled with the neighboring surgical society’s proud, morbid, and sometimes proudly morbid memorabilia, dating back to the earliest days of surgery.

Built in 1917, the home’s architecture replicates on a smaller scale Marie Antoinette’s alternative Versailles chateau. As cavalier as Marie might have been, something tells me she wouldn’t have allowed this kind of decor into her home. As I climb the staircase to start at the top of the exhibits and work my way down, I pass cabinets of rare and explicit medicine books. One landing just has unlabeled photos of children with misshapen limbs.

The name “surgical museum” is intriguing, but I realized while making my way through the exhibits that my expectations of what I might see were off, especially when it came to the contemporary art galleries. In the first exhibits visible on the fourth floor, the art consists mostly of enlarged images of skin printed on surprising surfaces, like canvas sacks stacked on top of one another.

The highlight of the fourth floor is the wound-healing exhibit. Not only are there detailed lists of potential wounds and dressings, but there’s also homage to a time when hacking, not healing, was the only option. Amputation kits from the 1860s fill the case. From the stains left behind, it’s clear the owner of the largest blade didn’t bother to clean up after the last use.

The third floor holds the Japan Hall of Fame and the Taiwan Hall of Fame. The Japanese hall, full of paintings and cases, focuses on their having developed ultrasound machines and wound stapling devices. The Taiwanese room, full of maps, focuses on making sure American visitors actually know where Taiwan is.

The obstetrics and gynecology room is next door. As the only room dedicated to women’s health care, it shouldn’t surprise you that it is also the most sparsely furnished exhibit in the museum.

Across the way is the X-ray room, featuring an antique x-ray shoe fitter. The contraption populated shoe stores from the 1930s to the 1970s. Customers could laugh at the sight of their metatarsals framed in leather while exposing themselves to low levels of what we now know to be a carcinogen.

Tucked behind this exhibit was my favorite display in the museum, on the nebulous phenomenon of pain. A brief history of the mysterious ailment and the various ways humans have attempted to dull its throbs and jabs circle the room, detailing ancient and medieval coping techniques. The latter third of the exhibit is dedicated to pharmaceutical painkiller problems, like the development of heroin and how America entered its first opioid epidemic.

Pride in the surgical profession shines brightest on the second floor’s Hall of Immortals. Larger-than-life white statues of history’s surgical greats line the perimeter of the room. There’s enough space in between statues that you wonder if any society members are hoping their stone twins will one day fill the gap. Connected to the hall is a marble and green leather library of the sort I thought only existed in Clue. No sitting and contemplating whodunit, though — the chairs are off-limits. You can, however, look at the titles of old medical texts lining the walls.

In the back of the first floor, a quaint replica of a Victorian pharmacy waits for you, complete with a recording of a “pharmacist” who sounds like Beaver Cleaver’s grandfather should have. From the contemporary art to the nostalgic pharmacy, the museum can be thoroughly explored in one afternoon. Some exhibits are temporary, so there will always be new displays. And, if you really dig into the oddball collection of artifacts on each stair landing, you can find some strange medical cases from history that are sure to inspire some pity.

Though information is often presented like a high quality scientific meeting poster, it’s worth working the museum into your Chicago trip. Not only will it be less crowded and less expensive than most of the city’s museums, but the exhibits are full of fascinating stories that other institutions might not — excuse the pun — have the guts to present.