It’s time to lay the cemetery to rest

Traditional burials are surprisingly hard on the environment, and suitable real estate is limited. 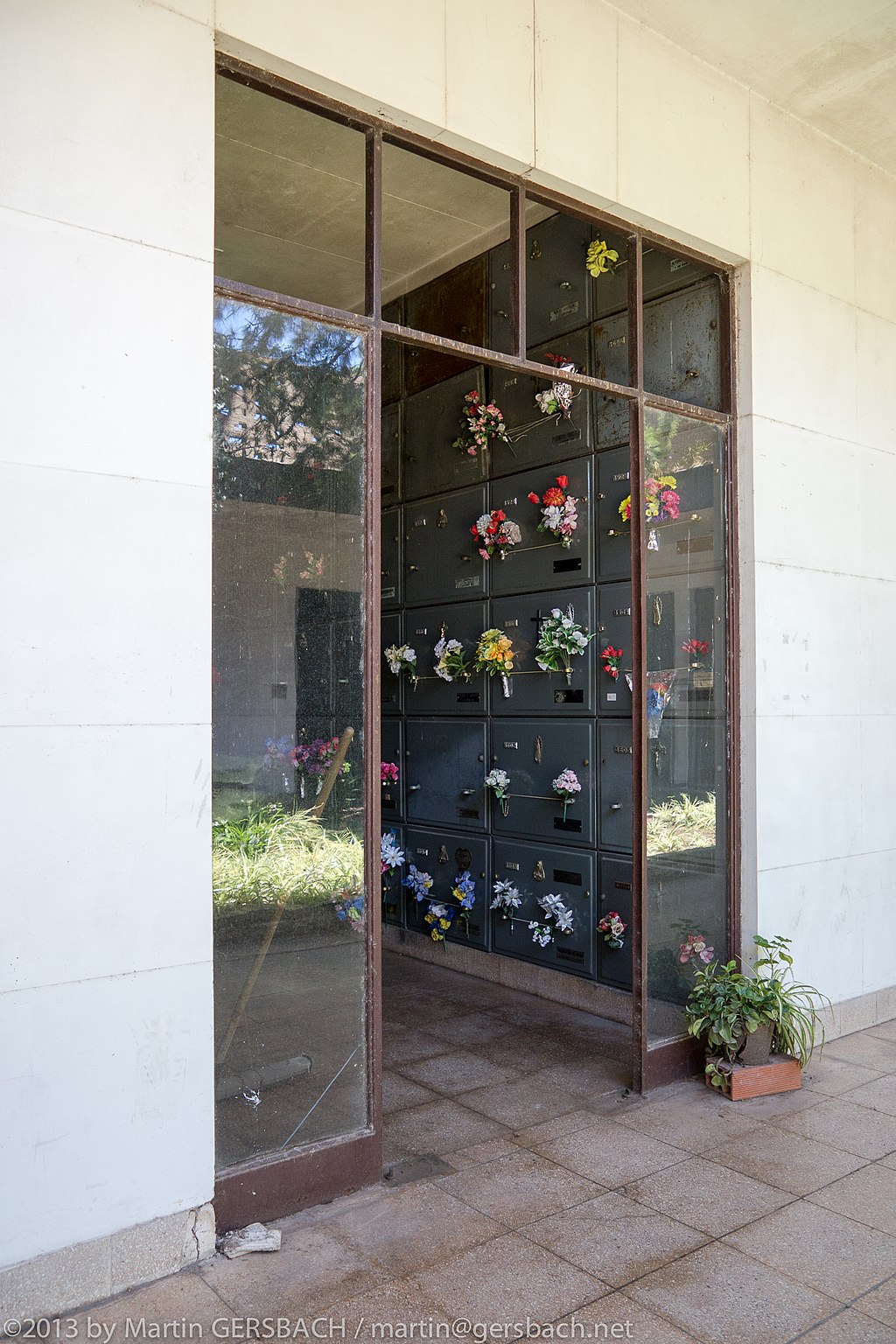 At Chacarita Cemetery in Buenos Aires, a wall of niches holding urns speaks to how costly and sprawling traditional graves can be. [Credit: Martin Gersbach via Wikimedia Commons]

Recoleta cemetery is one of Buenos Aires’ most popular tourist attractions. This elite eternal resting place houses more than 6,400 monuments in its 14 acres, and beloved former first lady Eva Perón is among its more illustrious residents. Less than five miles away is Chacarita Cemetery, with the same ominous beauty but less renown. At Chacarita, however, there are also walls of niches that look like giant stone filing cabinets, each one filled with urns containing human remains. This discrepancy between the ornate cottages and these modest drawers speaks to how only the very wealthy can afford a luxurious death, but there’s a less obvious explanation too: there’s no room.

Death — or rather, the way we handle death — is an environmental issue. The familiar cemetery is becoming a wasteful impracticality. As a horrific two years of pandemic death still rages on, it’s time to interrogate how our current way of commemorating our dead harms our fragile planet.

Typical Western death rituals require a lot of resources, from the chemicals needed to embalm a body to the wood, copper, granite, marble and other materials for caskets, urns and tombstones. Each year in the U.S., these rites use 30 million board feet of hardwood, 2,700 tons of copper and bronze, 104,272 tons of steel and 1,636,000 tons of reinforced concrete, by one estimate. That’s as much wood as you can find in 4 million acres of forest.

And what about cemeteries? Many are essentially massive, water intensive lawns doused in pesticides — and don’t forget about diesel fuel for the mowers. As big as the world may be, suitable space is still limited. Arlington National Cemetery, for example, is almost full.

The dead must also compete with the living for land. In Berlin, graveyards are being transformed into public grounds and housing. If the thought of that gives you Poltergeist fears, consider the catacombs of Paris, or the estimated 20,000 souls at rest beneath Washington Square Park in New York City. Even Chacarita Cemetery in Buenos Aires leases graves and niches, treating something as permanent as death as temporal.

Death in its current form is also expensive. The median cost of a funeral in the U.S. in 2021 was $7,848, according to the National Funeral Directors Association. Burial in a vault, which holds the casket underground, brings that figure to $9,420. Exchange a burial for a cremation and the price tag falls, but not by much: only to $6,970. Even a viewing of the body at a funeral will set you back $450. And none of that includes the cost of land and upkeep.

Something as universal as death shouldn’t be so expensive, and it doesn’t have to be. Eco-friendly alternatives appeal to the spiritualist in us, giving us peace of mind in how we treat the earth and our dead, but can also be cheaper. And some look quite familiar. Touted as an environmentally friendly alternative to cremation, alkaline hydrolysis breaks down human remains into their most basic chemical parts and runs between $1,000 and $2,500. Also known as water cremation or aquamation, this process has a carbon footprint about a tenth of the size of flame cremation. Aquamation also yields a product that can be returned to the family in an urn. If those urns are biodegradable, they can feed a living tree, creating an homage to the circle of life.

In one of the more eco-friendly proposed burial methods, the body would be placed in the fetal position in an egg-shaped, biodegradable pod, and the whole package planted underneath a sapling. As the corpse decomposed and enriched the earth, the tree would flourish. The same manufacturer that makes these pods also tenders biodegradable urns, which go for $330 each. Currently body pods aren’t available, but a more luxe version of this type of burial is a biodegradable suit or shroud made of fungi. Burials like these would be in a thriving woodland rather than a sterile cemetery. Since these solutions help the body to decompose quickly, there’s less worry about taking up finite space (so long as a community knows where and when bodies are buried so they don’t dig up in the wrong place at the wrong time).

This change won’t be easy. Death is taboo and highly ritualized. Some religions dictate the way a body is treated; deviation may seem sacrilegious. Even discussing a change could feel unnatural or uncomfortable. Some may even dismiss the implicit ties between death and nature as paganism, since Christianity associates death with the divine rather than the earthly. And altering the way we deal with dead bodies can raise disconcerting questions about death and the afterlife.

Our death rituals tie into our own discomfort with the unknown. If the transition to living without a loved one focused on nature, then perhaps that could soothe us. It could be wonderful to think that someone we loved is nurturing a new living thing instead of lying in a box six feet underground, pumped full of formaldehyde.

Maybe that sounds a little too woo-woo, but I’m not the first to imagine it. “Thanatopsis” by the 19th-century American poet William Cullen Bryant vividly depicts death and nature’s intertwined relationship. One stanza emphasizes how the earth and death are twin equalizers: “Thou shalt lie down / With patriarchs of the infant world — with kings, / The powerful of the earth — the wise, the good, / Fair forms, and hoary seers of ages past, / All in one mighty sepulchre.” If we adopt Bryant’s romantic, unifying view, then death is simply a return to the mighty life force that has nourished us all along — and now we nourish it in return.