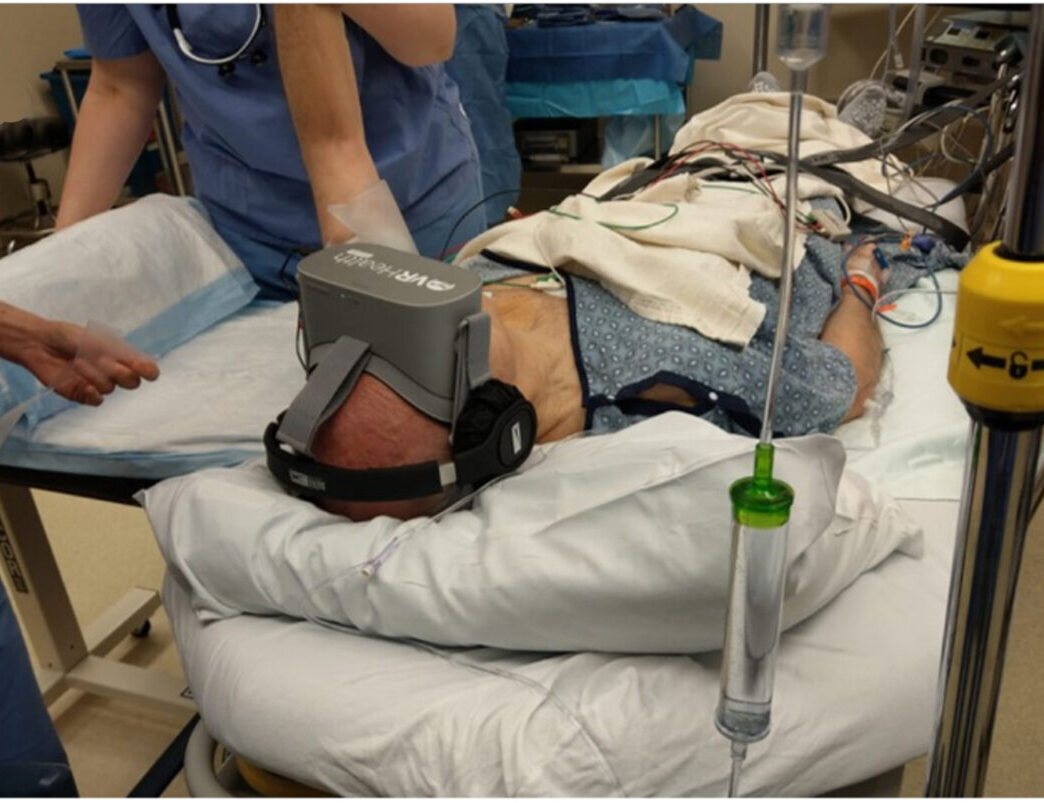 A new study found that experiencing virtual reality during surgery could reduce the amount of sedative that a patient receives. [Credit: Adeel Faruki]

Before heading into surgery, most patients want—and often need—sedation to ease pain and quell anxiety. But sedatives are sometimes overprescribed, which can lead to trouble breathing and low blood pressure. In a recent study, researchers at Beth Israel Deaconess Medical Center found that virtual reality provides a possible alternative to sedation.

Patients who undergo hand surgery typically receive injections that numb the arm. After that, “the only anesthetic that patients really require is enough relaxing medications, or sedative medications, to make sure that they don’t have anxiety,” says Faruki, who is now at the University of Colorado.

In the small trial, 17 patients wore a virtual reality headset during their hand surgery, while another 17 patients didn’t experience virtual reality. Patients had the option to listen to a guided meditation, watch a video or immerse themselves in a peaceful meadow or forest through a VR headset. After surgery, researchers found that 13 of the 17 patients in VR didn’t receive any sedatives at all during surgery, while every patient who didn’t experience VR were given sedatives. The VR patients received, on average, roughly 83% less propofol (a type of sedative) than those without VR. After surgery, the VR patients reported being much more aware during the operation than those who were sedated, but their pain and anxiety levels remained the same.

It’s important to look at both the dosage and patient experience together, says Brian O’Gara, an anesthesiologist at Beth Israel Deaconess who oversaw the study. The fact that receiving lower doses did not come at the cost of a bad patient experience is what makes the results compelling, he says.

Without the lingering effects of sedation, VR patients were released from the post-surgery care unit after 53 minutes, which was 22 minutes earlier on average than those in the control group. The time taken to recover post-surgery affects how many surgeries doctors can conduct in a day, Faruki says, meaning hospitals could treat more patients.

This is only the third study to test reductions in sedative doses during VR immersion, and the first to find significant results, according to O’Gara. He suggests this could be because patients had the ability to choose which type of VR experience they wanted. In the previous studies, patients weren’t given the option to choose what they viewed, which may have led to boredom and reduced VR’s ability to distract the patient, he says.

“I’m not surprised at all that the VR worked,” says F. Kayser Enneking, an anesthesiologist at the University of Florida who was not involved in the research. Using distractions during surgery like listening to music, watching TV or even talking to the doctor has been long known to reduce pain and the dosage of sedatives that patients receive. Virtual reality may be a better form of distraction “because it’s immersive and patients can’t hear or see anything else,” O’Gara suggests.

An important caveat to this study, however, is that anesthesiologists determined the propofol dosage for patients who underwent the VR experience, without any say from the patient. If the anesthesiologist is looking at someone with a virtual reality headset on, they might just give them less propofol, O’Gara says. That makes it hard to conclude whether some patients really needed more or less sedatives during surgery than others.

O’Gara’s team is addressing this limitation in a larger follow-up study at Beth Israel Deaconess. This time, patients who aren’t experiencing virtual reality will still wear a headset, without watching any content, so anesthesiologists won’t know who might need lower amounts of sedatives. The follow-up study, which will wrap up by the end of 2023, includes older patients who are undergoing knee surgery. Older people are more at risk of side effects from sedatives, especially confusion and cognitive dysfunction.

Anna Gibbs grew up in the coastal town of Ipswich, Massachusetts, and studied poetry at Harvard University. When she discovered she could combine language and storytelling with science, she knew that’s what she wanted to do. Now she writes about nature, ecology, and climate change, with the goal of making others love salt marshes as much as she does. Her hobbies include bothering her cats and drinking chai lattes.