Scientist With a Cause 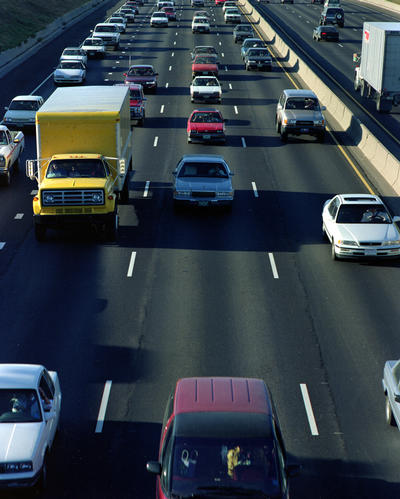 The sounds of the apocalypse thunder through the classroom as Professor George Thurston fumbles with audiovisual equipment. He is attempting to show a scene from the global warming blockbuster “The Day After Tomorrow.” The DVD menu flashes across Thurston’s sky blue polo shirt as he walks in and out of the projector light.

The movie’s hero is a dashing young scientist, a depiction that bucks Hollywood’s usual format. “In the movies, it’s usually a mad scientist. Scientists are always the bad guys. Ever notice that?” Thurston asks the graduate students in his Weather, Air Pollution and Health class at New York University.

Thurston then jokingly remarks to his students that scientists are also not usually as good looking as Dennis Quaid. Chiseled faces and physiques notwithstanding, some scientists, like Thurston, do resemble the hero character of “The Day After Tomorrow”— they refuse to remove themselves or their work from society. Thurston has often testified before Congress in attempts to block efforts to weaken the Clean Air Act, and he analyzed the health risks posed by World Trade Center dust after the 2001 terrorist attacks. Currently, he is studying how air pollution may induce asthma attacks in the Bronx. Like much of Thurston’s work, the South Bronx Air Pollution Study extends beyond scientific research. It reaches into the community to establish policies to protect it.

Earlier this year, 40 members of the South Bronx’s largely Hispanic community submitted public comment to the United States Environmental Protection Agency advocating tougher standards for particulate air pollution. Neighborhood groups associated with Thurston’s study “brought in the community,” he says. “They got them to write letters, they got them to sign petitions.”

“Thurston has given us a leg up in the area of community outreach,” says Ajamu Kitwana, deputy director of Youth Ministries for Peace and Justice, a Bronx nonprofit organization. According to Kitwana, the study bolstered
the argument that air pollution was disproportionately affecting South Bronx’s children and community compared to the rest of New York City.

Thurston’s research in the Bronx found that high levels of soot – carbon particles in the air from diesel engines and industry –increase the frequency and severity of asthma in children there. Approximately one in four children in the South Bronx has asthma.

For the last five years, Thurston has been analyzing air pollution in and around four public schools located near highways in the South Bronx. Researchers gave ten asthmatic children special backpacks to record the amount and type of air particles they were exposed to each day. The study also documented how the children physically responded to the air they were breathing.

To discover which air contaminants were most harmful, Thurston focused on particulate matter, a term referring to pollutants such as sulfur, carbon, ammonia, salts and heavy metals. Some particles may also contain more than one contaminant.

“I think really what that kind of work is most useful for is figuring out what [type of particulate] we should be controlling first,” says Thurston. He explains, however, that regulating the contaminants individually at this time is impractical, because they are difficult to measure and more research is needed.

Pending legislation on particulate matter addresses particulate size, not its components. Large particles in the air become trapped in the nose and throat, but PM10, or particulate matter of 10 micrometers or less, can reach the lungs. A micrometer is approximately one tenth the diameter of a human hair. Particles that are one quarter that size, however, are small enough to enter the bloodstream through the lungs, making them even more toxic.

Previous studies have not definitively established whether air pollution causes asthma, but Thurston’s Bronx study found that it does aggravate its symptoms, which include wheezing, coughing, and asthma attacks.

Studying asthma is difficult, Thurston explains, because the condition varies with each individual. Different types of pollen, dander, and other allergens trigger attacks in some people but not others. The Bronx study, however, found that soot affects all asthmatics, because it increases inflammation within the lungs. Once inflamed, the lungs are more vulnerable to other allergens.

“Whatever it is, from day to day, you know [the children’s] exposure to pollution makes them twitchier, more reactive to those things that cause their asthma. So it’s sort of a promoter of asthma attacks,” says Thurston.

Through his research and community activity, Thurston has won fans in the Bronx. “Thurston was especially good, because he is an academic and has a history of making his research applicable to relevant policy changes,” says Kitwana.

The connection between science and policy is not always so smooth, says Thurston. “I think it’s a very important question and one that I’ve grappled with for years.” He adds, “Some scientists are like, ‘Well, I published a report, so let the policymakers sort of decide what to do with it.’ The problem with that is then [policymakers] misinterpret it. I think it’s incumbent on the researchers to go forward and explain what it really means.”

Thurston is outspoken about air pollution and its effect on public health, but maintains, “I’m not an environmentalist. I’m an environmental scientist.” His agenda, he says, is to explain his findings clearly, not pander to special interests. “In the middle is where we scientists are, and that’s not a very comfortable place to be. Because you get shot at from both sides.”

About his own testimony and those of the Bronx community groups at an EPA hearing, Thurston says, “This combination of the scientist presenting the science and the community presenting the human face of the problem, I think is a good one.”

“So that’s one of the cases where instead of just studying the problem, we actually tried to help them, supported their efforts to try to ameliorate the problem,” says Thurston.

Public welfare has concerned Thurston ever since his undergraduate studies at Brown University, where he pioneered its environmental engineering program. “I was an engineering student, and I decided it would maybe be better to figure out, you know, how to have a better environment than to try to figure out how to build more bridges,” he recalls.

Ever since, Thurston has been juggling research, policy, teaching, editorial writing, a wife and four children. “I like doing it all. I try doing too much. I feel like I don’t do any of it as well as I could. If I stuck to research, I’d probably be a better researcher, and I could get more money. And if would do more policy stuff, I would probably would be better at that, and if were home more, I’d probably be a better parent.”

Thurston adds, “I generally find other people are much happier with what I’ve done than I am. So in the end, I guess that’s the best I can hope for.”

Interesting..there was an article in amNY yesterday about the subway aggravating asthma (heat + industrial cleaning products = trigger) and the need for the MTA to use “green” cleaners.

I would welcome a medical explanation of the rising asthma rate in NYC combined with the falling air pollution rate. It can’t just be better medical reporting of asthma cases. Anyone got any ideas?

It’s a common question. One thing is that air pollution is only one part of asthma, and other environmental and genetic factors collectively have a much larger effect, so improving just one thing (cleaner air) can’t be expected to necessarily show up in the overall trend. Just like saving money in one area of your budget (e.g., fewer movies) might not cause your overall bank balance to improve if something else goes up more at the same time (e.g., increased cable costs).
But the overall upward asthma trend seems to have something to do with urbanization. No matter where around the world urbanization occcurs, asthma goes up. One theory is that, even though vehicle tailpipe emissions went down, unmeasured pollutants, like tire-wear particles (tires are made of latex) are uncontrolled, and go up with vehicle miles travelled, which are rising worldwide. For some links on this topic, see:
http://latexallergylinks.tripod.com/tire.html