Physics on the Brink

The much-anticipated Large Hadron Collider has physicists on the edge of their seats. 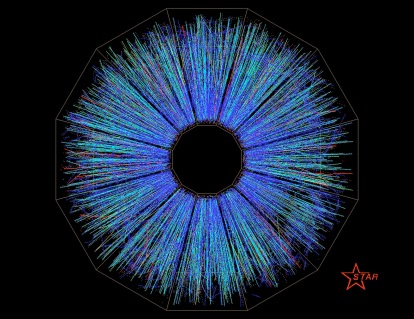 When we met... [A particle shower produced at RHIC, a collider similar to the upcoming LHC. CREDIT: BROOKHAVEN NATIONAL LABORATORIES]

I’ve heard about a gravity beam that can send people through space. Is that for real?

The End of Time? Not Quite

A revolution is coming. Our understanding of the basic nature of the universe will be destroyed. One hundred years of modern physics will be instantly relegated to history textbooks. Out-of-work string theorists will roam the streets begging for change. A grand new era of human knowledge will be ushered in! The times, they are a-changin’!

Or at least, they might be. Physicists certainly hope a revolution is on the horizon. Experiments in the next few years might radically change our understanding of the universe—or they might not. It really depends on how nature behaves, of course.

Welcome to the cautiously exciting world of theoretical physics, where an Einstein-esque reworking of the fundamental laws of nature might be around the corner, but nobody is willing to bet money on it. Physicists are all very excited, you see, but they can’t discount the possibility that nothing will happen at all.

The main event, the big kahuna, the obsession that has got the physics world in its strangely reserved tizzy, is upcoming completion of the Large Hadron Collider. The LHC is under construction right now at CERN, Europe’s premiere particle physics laboratory. When it is finally ready for action in 2007, it will be the most powerful particle accelerator in the world, smashing protons together with more energy than humanity has ever mustered before. Sure, we can smash atoms now. But we can’t smash them this hard! It is going to be, in a word: awesome.

“How often do you have a whole field sitting on a precipice, knowing full well that something that’s going to completely change everything is sitting right in front of you and you have no idea in what way?” says Neal Weiner, a cosmologist at New York University, who is blissfully unaware of his own immediate danger of falling. As he gestures enthusiastically he is rocking farther and farther back in his chair, feet perched on the edge of his desk, every bounce inching him closer to keeling over backwards.

“I don’t know of another time historically when an entire field was sitting there looking at this one big thing like an oracle. We’re waiting to hear, what is the future of physics? We have no idea!”

Weiner, like all theoretical physicists, is a man of pencil and paper, computers and chalkboards. He will probably never see the LHC in action, nor attempt to understand in detail the incredible feats of engineering that make it possible to accelerate protons to nearly the speed of light. His job is to create mathematical models of the laws of nature, to describe to the experimentalists what they should be on the lookout for in their subatomic explosions, and to eventually pore over the observed results to see if any of his theories are still valid.

So while hundreds of experimental physicists work feverishly to bring the LHC online, Weiner and the theorists hold their collective breath, on the edge of their seats, trying not to fall over backwards from sheer anticipation.

“Right now everything’s gearing up for this experiment. We are just waiting for these people in Switzerland to turn this thing on.”

Turning the LHC on is not as easy as flipping a Swiss switch, however. Building a 2.6-mile-wide atom-smashing machine is an undertaking of international scale—scientists from 34 countries have been working on the project for eight years, and new collaborators jump on the bandwagon every day.

Allen Mincer, an experimental physicist at NYU, received formal approval for his team to join the project just last week, even though they have been collaborating with the LHC crew for months.

Mincer does not gesture wildly or speak a mile a minute like Weiner, but he is just as excited about the LHC’s potential. “It’s been a really long time since we’ve found new particles. There was a period in the fifties and sixties when particles were being discovered all the time, but since then it has been really difficult,” he says.

The difficulty lies in the sheer amount of energy needed to produce new particles, that Holy Grail of physics. Everything in the universe—matter, energy, and the forces with which they interact—can be described by particles. There are everyday particles like protons and photons, in our bodies and in sunlight, that are familiar and comforting and easy to understand—the girl next door. Then there are the particles on the cutting edge of theoretical physics: exotic, wild and untamed—scantily clad tropical vixens that have never actually been seen and may not even exist.