I’ve heard about a gravity beam that can send people through space. Is that for real? 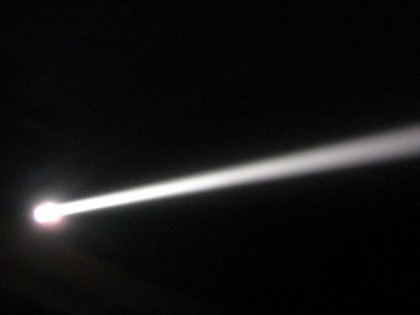 Is that an anti-gravity beam in your pocket? [CREDIT: nevrlndtink1226]

Humans may be a long way from beaming each other up, but at least one Earthling would answer “yes” to your question. In 1992 a Russian engineer named Evgeny Podkletnov was experimenting with superconductors at Tampere University of Technology in Finland. One day, a senior scientist stopped by Podkletnov’s lab to evaluate his research. The professor was smoking a pipe in the lab, and Podkletnov was becoming exceptionally annoyed. He worried that the tobacco smoke would ruin his equipment, costing Podkletnov months of painstaking recalibrations and repairs. Then he noticed a column of pipe smoke moving upward directly above the superconducting disk that was spinning over very strong electromagnets. Podkletnov thought the magnetic field created by his experiment was reducing the effect of gravity on the smoke directly above the superconductor, making it lighter.

Podkletnov did further experiments, in which he used the very strong electromagnetic force to “lighten” silicon chips attached to a scale that he hung just above the middle of his superconductor. He determined that the objects above the beam were being made lighter by two percent of their mass. Podkletnov said the superconductor was shielding these objects from the effect of gravity, and the phenomenon became known as the gravity shield.

The effect had, and still has, revolutionary potential. All forms of transportation, both on Earth and in space, would be drastically changed if Podkletnov’s device could be made stronger and refined. Humans would be able to strategically alter gravity, meaning that escaping Earth’s gravitational pull would become almost trivial. Travel, between planets and between point A and B on our own planet, would be thrust into the future.

Unfortunately, Podkletnov never published his paper. He was fired from the university and went home to Russia. The mainstream physics community pooh-poohed the idea of an anti-gravity effect, some even calling it absurd. To date, no other group of academic scientists has been able to replicate the anti-gravity effect. Podkletnov did claim, in 1997, that two sets of researchers replicated his results. But he said that they would not publish their findings for fear of persecution by other physicists.

And yet, the quest for an anti-gravity beam continues. NASA had invested over $3 million in the project since 2000, and Boeing and British Aerospace Systems, the largest European defense company, are both reported to have gravity shield programs that attempt to recreate Podkletnov’s findings. To date, no group has announced the successful development of the beam or its successful application to space travel. So although the gravity beam may or may not exist, the funding of it is a definite reality.

A scientist by the name of Ning Lee working at the University of Alabama (huntsville alabama ) back in the late 90s had the math behind this effect. Podlenov used her work to prove the possibility of his. NASA invested money in her math but when she found out that NASA’s idea of a grant was to use 9/10s of it wining and dining and only giving her 1/10 of the money, she backed out. She was quite a brain but did not understand the stupidity of the NASA bureaucrats at the time. I was there and had many enjoyable talks with her at the time.

is speed of light achieveable?

theoretically speed of light is unattainable however, you can supposedly travel faster than light by warping (bending gravity or the fabric of space) so that you basically teleport from a to b.

Apparently there’s work being done on a Z-machine engine that’ll use anti-matter to propel humans. (only problem is the gamma ray issue that arises with the propulsion system). However, if successful, we can theoretically travel from earth to mars in 2.5 hours, and earth to the nearest galaxy in 80 days. pretty cool.

I read Nick Cook’s book the Hunt for Zero Point some time ago. At the very end he mentions, almost as an after thought, the work of Ning Li saying she had developed a cermic rotating super conductor disc of some sort that would produce an anti gravity beam above its surface. I find it astonishing that after a grant, from the DOD I think, she left Huntsville and I can now find no mention of her current work or what she is now doing.

In order for you to ride along all of your particles would have to first be transformed into energy – energy that would radiate as… wait for it… light. Because the particles that make up most of your body are fermionic, however, meaning that they have rest mass, they would have to be accelerated in order to convert their mass to energy. As they approach the speed of light it would take more and more energy to accelerate them any further, and before they can actually reach the speed of light, alas, it would take an infinate amount of energy to give them that last push… so no ride for you.