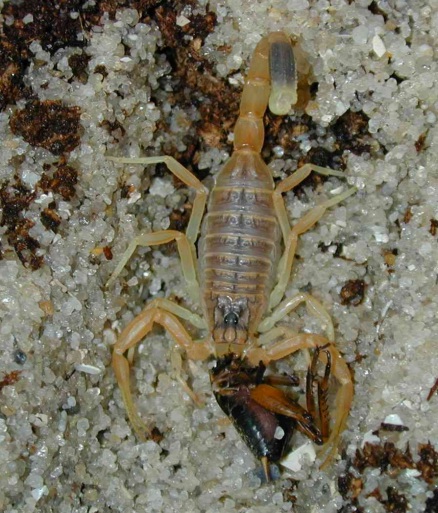 In an attempt to treat a rare and lethal type of brain tumor, doctors are turning to an unlikely source: scorpion venom.

A team of researchers administered a synthetic form of a protein found in Giant Yellow Israeli scorpion venom to patients suffering from malignant glioma tumors, a type of brain cancer that strikes people in their fifties.

In the wild, this scorpion preys on cockroaches—the protein in their venom binds to cockroach nerve cells, paralyzing the bugs for easy eating. Through a quirk of nature, malignant glioma cells also have a receptor that attracts this protein, but healthy human cells do not. The researchers took advantage of this peculiarity to use the venom to deliver radiation directly to tumor cells.

“It’s like a smart bomb, in a way,” explains Sith Sathornsumetee, a neuro-oncologist at Duke University Medical Center, who was not involved in this research.

In this study, the scientists attached radioactive iodine to the venom protein so that they could use scans to see where the venom ended up in the patients’ bodies. The hope was that the radiation would be delivered right to the malignant cells, killing some of them. The team reported success in the August issue of the Journal of Clinical Oncology—they found the venom protein attached to tumor cells but not to any other cells, and the treatment had few side effects.

“It is pretty encouraging that there was no toxicity,” says Adam N. Mamelak, a neurosurgeon at Cedars-Sinai Medical Center in Los Angeles, who led the research team.

While this study was primarily designed to test the safety of using the venom protein, the researchers also monitored the survival times of their patients. Gliomas are deadly—less than 20 percent of people with this cancer live for a year after they first experience symptoms like headaches and seizures. In this study, however, patients fared much better than the average glioma patient. Some survived for more than two and a half years.

“They had surprisingly good outcomes,” says John W. Henson, a neuro-oncologist at Massachusetts General Hospital, who is not affiliated with the study.

But other factors beyond the venom treatment could have contributed to the lack of side effects and high survival rates, point out both Sathornsumetee and Henson. The patients were young, in good physical condition, and still able to go to work. These three factors, says Henson, are important in determining a patient’s prognosis.

“We have to take this with a grain of salt,” says Henson. Preliminary studies like this one often “turn out to be not as exciting,” he warns.

“We don’t want to jump to conclusions,” agrees Sathornsumetee. But, “it looks promising.”

Just how scorpion venom will figure into glioma treatment is not yet known. Currently, another trial is underway to see how effective this treatment is in a larger group of patients. The researchers expect to complete that study in about a year.

so thats good news atleast prognosis could extend to some years.