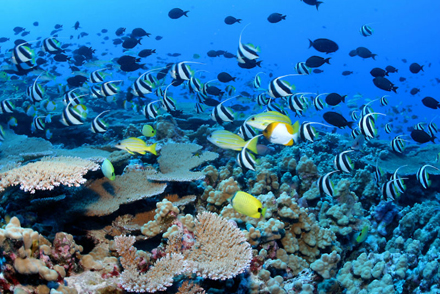 A surfing trip in Indonesia brought Lyndon DeVantier face-to-face with his future: coral. Though he’d never seen a coral reef before, the native Australian fancied the view and later wrote his dissertation at the University of Queensland on the predatory effects of the crown of thorns starfish, a marine pest, on coral. Since that time, DeVantier, now 50, has spent over 20 years as a coral ecologist with experience in ecological assessment, monitoring and sampling design, taxonomy, teaching, and training.

As a technical consultant to multiple conservation agencies, DeVantier has conducted various field assessments of the biodiversity and status of coral reefs. In the spring of 2006, he worked with Conservation International as part of a team conducting an ecological study of the Bird’s Head Seascape, off the coast of Indonesia’s Papua Province. Currently he is working with the Australian Institute of Marine Science to compile data on coral geography for a web-based reef management tool.

Over the past decade, DeVantier has become increasingly interested in marine management, particularly the development and improvement of Marine Protected Areas (MPAs). He’s worked with MPAs in the Great Barrier Reef, the Red Sea, and the Socotra Islands in Yemen, to name a few. In 2002 and 2003, he collaborated with a team on the first dedicated MPA project in Vietnam.

Although coral reefs occupy less than one percent of the worlds’ oceans, they support 20 to 30 percent of the species that live in those waters, according to DeVantier. But impact from over-fishing, sediment run-off, and perhaps, most insidiously,greenhouse gas emissions and climate change, are threatening reefs’ survival. In 1998, a major bleaching destroyed reefs worldwide killing 95 percent of coral in some areas. This past summer, two species of Caribbean coral were listed as “threatened” under the Endangered Species Act. Learning more about what species exist and where—and coming up with ways to protect them — is crucial to coral reef survival. -Interview by Julie Leibach

You’ve traveled to many areas in the Indo-Pacific and Australia to assess coral reef ecology. What does an ecological assessment entail?

I’m a small part of a team, usually. I specialize in the reef-building corals. Almost always there’s someone doing the fishes; there’s often someone looking at the algae, someone at the mollusks. Then the level of assessment depends very much on the project.

If it’s a longer-term project—for instance, the development of protected areas—we often spend several years there. There’s an initial assessment with a group of specialists that documents the biodiversity, then there’s usually a monitoring system that’s put in place to look at the effectiveness of the development of the marine park, and then maybe a final biodiversity assessment at the end of that stage of the project before it’s handed usually to national authority to run the park in the future.

The short-term ones are often just three weeks in the field. They’re typically used by the nature agencies in planning where to site marine parks or where to focus further effort in terms of their broader strategies of developing networks of protected areas around the world.

When you were at the Bird’s Head Seascape, you did two surveys. How would you describe the coral that you found?

We were pleasantly surprised. There was some local damage from destructive fishing activities in a few places, but by comparison with other areas where I’ve worked, it was generally pretty good—and from the biodiversity side, it was spectacularly exciting. In the end, when we tallied it all up, we think we found approximately 600 reef-building coral in all in the two surveys. In the richest individual sites—which are not much bigger than a football field—we found maybe a dozen sites that had more than 250 species of coral in them, which is exceptional by global standards—so, extremely rich and also in reasonably good condition. I think part of the reason why is that there hasn’t been a large local impact to some of those areas. One of the areas we worked in Cenderawasih Bay is Indonesia’s largest marine park, and they have a very dedicated team who I think are doing a really good job.

A study appearing in June in the journal Science noted that the performance of marine protected area management varies worldwide but is particularly low in regions of high coral biodiversity, like in areas of the Indo-Pacific and the Caribbean. What do you think is necessary for a marine protected area to be effectively managed?

Generally, the problem is that there’s not enough people involved in the management agencies, not enough commitment from the governments of these countries. There’s been a pervading notion that you just make legislation and set up a park and that’s it, it’s finished—and obviously that doesn’t work because you’ve got no capacity to run them. I think particularly the conservation agencies are much more now focused on the longer term success of these places in that they know that they can’t just spend three or five years there and it’s all going to be hunky dory. The Sicotra one that myself and my wife worked on—we were there for three years, from 1997 to 2000. But that project—and the international contributions—are still continuing, so the project has been funded now for almost a decade

A major approach to effective management is the development of ecotourism and trying to find alternative sources of employment for the local people that are less damaging to the biodiversity attributes of the parks. In many instances, you have very intense local fishing pressures, particularly in places like Vietnam, and so you need to find a way to make the people a) support the marine park that, all of a sudden, is around their homes and b) find a way that they can still make a living. Often, it usually revolves around ecotourism and trying to direct funding from the money that’s coming in from increased tourism back into local communities.

What do you think is the best way of creating a marine protected area?

The creating side is very much science based. One aspect of it is that you want virtually all the species that we know about—and particularly the keystone ones—represented inside your marine park—and that’s way away from happening. To achieve that, you need huge areas, and we’ve got tiny areas at the moment. And there’s a lot of rational discussion that whatever you do in a marine protected area, it’s not going to be enough, and that you’re going to need an oceans policy, as well as a network of marine protected areas.

In Vietnam where I spent a couple of years on their first marine protected area development, initially the Vietnamese wanted to make one part of one tiny island the marine park, and myself and my colleague convinced them that that was way too small. We ultimately managed to get them to include about nine islands in all, which was a much bigger area—160 square kilometers—but which is still really small when you compare that with the Great Barrier Reef, which is 325,000 square kilometers. They do have a national plan to set up 15 more of these parks over the next decade. And they probably all will be remarkable successes in terms of generating income from tourism, but the successes that they have in terms of biodiversity conservation is another question.

As part of a team at the Australian Institute of Marine Science, you’re helping to develop a web-based coral reef management tool—what is the idea behind that?

It’s Charles Veron’s brainchild. He’s AIMS’s principal research scientist. He, probably more than anyone in the last 20 to 30 years, has identified the reef-building coral taxonomy. The work that I’m involved in with him and as part of a team is to take his large amount of information about where each species lives around the world, and all of the information that myself and my colleagues have collected over the past 20 years—we’ve got detailed information on which species occur where—and create a web-based coral geographic [tool] that will allow planners in the major conservation agencies to look at where each species occurs, which places are really rich in terms of their species compliment. It will allow us to look for gaps. Say we’re particularly interested in knowing about the grey corals, for instance—there’s about 20 species in the Indo-Pacific—and we’d like to know how well they’re represented in a marine park. We can take out a map of where these marine protected areas are and then superimpose on that our data about where we know those species occur. Then we’ll have a much better idea of what species are protected.

Once that’s done, there will be all sorts of applications. We could put in some of the oceanographic information about sea temperatures that are coming through—almost in real time now from satellite sensors—and look at which corals are likely to be affected. So it would have some sort of predictive capacity and will help in terms of designing a future towards a real global network of protected areas.

What are some of the most pristine areas that you’ve seen?

The Saudi Arabian Red Sea—it’s an absolute desert coast line—from where Saudi Arabia joins Jordan, all the way down the Saudi Arabian Coast, which is a couple of thousand kilometers of near pristine reef. The other areas that I think are really quite exceptional are in the Bird’s Head seascape—that’s one of the great highlights of my twenty years’ worth of work.

I would like to see these crown of thorns distributed around the world to those researchers that might find a commercial use for them, then it may be economically feasable to mine then. Actually using a suction tube to bring them into a ship, allowing the water to return.. This could be faster than injecting them with poison.
Perhaps they could be dried,ground and used for fertilizer? How about use in medicine, what could they treat in humans or animals. Have they been tested in cancer research trials. God put them here for a reason, what is it?

I have been working on what I have called a ‘Genesis Reef’ idea that may need implementing in the fight to revitalise particularly barren areas of once pristine reef. I would be available to discuss it on the net if I was assured that nobody else would steal the idea.