The locksmith of yesteryear can't compete with the technology of tomorrow. 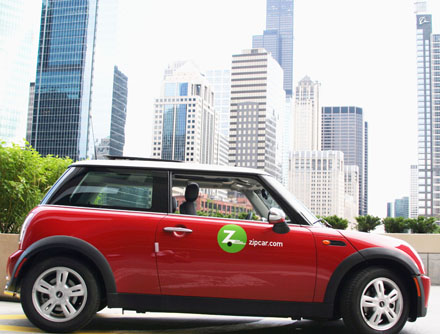 Having just moved into a new apartment a few weeks ago, my roommates and I set off, New Jersey bound, for an Ikea adventure by way of my trusty ZipCar membership.

After a harrowing trip through Chinatown and the ridiculous maze of the New Jersey freeway system, we finally arrived in the Ikea parking lot to begin shopping in earnest. Alas, in a fit of rather inauspicious stupidity, I managed to lock my ZipCard, a credit card-like device which locks and unlocks your assigned ZipCar, in the vehicle along with the car keys. In the eloquent words of Homer Simpson, “D’oh!”

Panic ensued. I envisioned hours of humiliation as I awaited Pop-a-Lock or AAA in the blue, yellow, and asphalt wasteland of the Elizabeth Ikea parking lot. However not having contact info for these organizations, I fought back tears and called the ZipCar customer hotline for help.

To my ultimate surprise, I witnessed a miracle. After asking me several security questions, the lovely woman on the other end of the line sent an “unlock signal” to the car. Like the Red Sea parting, the lock latches rose from the door panels with a hearty “click.” Presto – I was in! I grabbed both keys and my ZipCard and met the roommates inside by the coffee tables.

But the angst of the day, and my salvation, still plagued my mind. How did this masterful technology work? Where did the signal come from? Were there ZipCar satellites orbiting the Earth waiting for people like me to indulge their personal negligence?

So, I contacted ZipCar to ask.

“We have cellular communication with all of cars,” said Doug Williams, Vice President of Engineering at ZipCar. I think to myself, “Wow! So you can call your car like you call your buddies?” Not exactly.

The network is “prevalent, it’s worldwide. We use the same in the US, same in Canada, and the same in London,” said Williams. ZipCar has vehicles in all three countries.

When the ZipCar angel sent the “unlock” signal to my car, the message went to a very small computer device that ZipCar puts in each of its vehicles. That microprocessor then sent a signal to the card reader on the vehicle’s windshield, which told it to unlock the doors.

The card reader uses Radio Frequency Identification or RFID technology to identify a person’s ZipCard. If it’s the right person with the right card, the card reader sends a signal to unlock the doors.

Williams summed it up: the ZipCar helpline “issued a cellular ‘unlock’ command that responded to the micro-processor that talked to the card reader.”

What he calls technology I call fabulous.

In addition to gadgets, automation, and voice recognition systems, Williams also deals with the security aspect of ZipCar, starting with signal encryption. “We’ve taken a lot a lot of precautions. We’ve been in place for a number of years and have been able to incrementally grow. So we’ve been able to ensure proper precautions.”

I was actually tempted for a moment there to try driving in the city, just to see the car. Good stuff.

I love the ease of using my ZipCar membership–helped me out of a few pickles. And I got to test-drive a hybrid in the streets of New York. Fun times!

Ahh technology…. once again saving us from the imbicility innately passed down from our forefathers. If Archduke Franz Ferdinand had GPS he would have not taken that wrong turn into a bosnian-serb bullet, thus saving the world a giant waste of time.

@Fugio El Gordo
Actually, had he had GPS, things would have probably been no different, since GPS tends to get you lost as well… trust me!

My question is this: how do I incorporate this technology into a five year old car? How about several cars?