An NYU professor’s career has taken him from the brain’s evolution to the future of drug delivery. 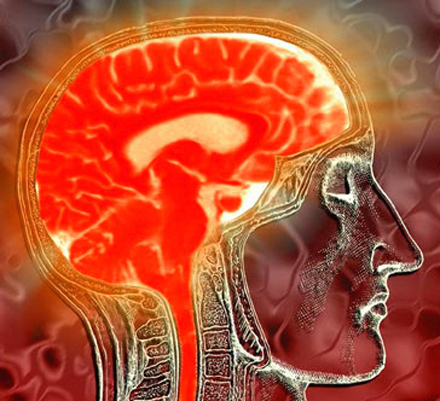 Colorful brain scans show an aura of activity in the brain. [CREDIT: ALZ.ORG]

When Charles Nicholson came to the United States from England in the late 1960s, his first research subjects at the University of Chicago were small alligators. He didn’t choose them because of their availability in local swamps or sewers, but because they represent an early step in brain evolution.

“When they get upset, they can be quite mean,” he recalled. “I don’t think I’d go back to alligators.”

Now Nicholson is a professor in the department of physiology and neuroscience at New York University. His work on how molecules flow through the spaces between brain cells is helping pharmaceutical scientists understand how drugs, such as those which treat brain tumors, reach their receptor targets.

Rodolfo Llinas, Nicholson’s longtime colleague and chair of the physiology and neuroscience department at the New York University School of Medicine, recalls a summer spent in California researching the brains of fish and squid. When they began to run out of fish, the two scientists went searching for more. They found appropriate replacements in the ornamental fish tank of a restaurant and attempted to buy the fish from the restaurateur. The restaurant’s customers must have thought they were crazy, Llinas reminisced.

Now Nicholson works primarily with rats. Last spring Nicholson’s laboratory used rats when they conducted the first analysis of the extracellular space between masses of brain cells in live animals. Their study, published in the Proceedings of the National Academy of Sciences, showed that the passages between brain cells are twice as wide as previously thought.

Previous measurements of these spaces, using electron microscopy of tissue slices, were imprecise because the slices were first dehydrated. Dehydration reduces the size of the spaces.

To avoid the dehydration problem, Nicholson’s team took a novel approach. They injected sugar polymers and fluorescent probes into the live rats’ brains with glass micropipettes and took pictures with a fluorescence-detecting camera as the mixture spread through the brain. Then, using a computer program, they created a three-dimensional model of the diffusion cloud.

The images captured by the camera look like nested circles in shades of gray. Nicholson’s team then colors the images, making it easier to discern the levels of polymer. Red at the center, indicating high concentration of the polymers fades through yellow to blue, indicating diluteness at the edges. The images bear a striking resemblance to the brightly colored circles in the Kandinsky print hanging on a back wall of Nicholson’s lab.

The fact that the circles extend so far into the brain shows that molecules as large as the sugars can travel through the extracellular space, so drug developers could design drugs as large as that with the knowledge that they could penetrate the brain.

Margaret Rice, a physiology and neuroscience professor at NYU who was Nicholson’s postdoctoral assistant in the late 1980s, noted that Nicholson has collaborated with researchers from all over the world.

Rice now studies dopamine, a chemical that modulates feelings of reward and addiction. She credits Nicholson with facilitating her transition to neuroscience from analytical chemistry.

Nicholson made a similar transition during his own academic career. His first degree was in physics, chosen on a school counselor’s advice that there was “really no future in biology.” But eventually, Nicholson came to feel that modern physics was too abstract. Conversely, in biology, he says, “you’re immediately in contact” with the subject of your study.

More than thirty years have passed since that day, and Nicholson’s commitment to biology remains strong. He works in a specialization of neurobiology that he “almost single-handedly created,” according to Mitchell Chesler, another former student of Nicholson’s who is now an NYU neuroscience professor himself. Chesler observed that methods Nicholson invented are now used by other labs.

“I couldn’t have wanted a better scientific role model,” Chesler said of his “diligent and careful” mentor. Nicholson’s role as a mentor continues today: his current postdoctoral assistant, Robert Thorne, came to NYU because Nicholson’s work coincided with his own interest in the transport and delivery of drugs through the body.

While Nicholson has worked at three universities in as many states during his 30 years in neuroscience, his career has shown one thread of continuity. Nicholson was one of about ten scientists who migrated from the University of Chicago to the University of Iowa and finally to NYU when Eric Kandel’s departure for Columbia University left a vacancy in the department of physiology.

“We have been colleagues for 40 years–that is a lifetime,” said Nicholson’s department chair, Llinas. He added that he and Nicholson have been able both to work together on the same project and to work independently as respectful colleagues. “We have managed to have a very constructive research effort in this department,” he said.

After decades together, and despite some drifts into different subfields of neuroscience, Llinas, Nicholson and the others all inhabit offices along the same hallway. Together, they will help shape our understanding of how the brain works at all levels–even the spaces between cells.

It is great to see how the tradition of biophysical rigurosity of Dr. Nicholson and the deep insight of neurobiology of Dr. Llinas is combined in the new perspectives of Dr. Chesler.
Many researchers should be happy to see this new explosion of research where fresh biochemical perspectives about the extracellular space (extracellular matrix, fibronecting, collagen) are analyzed with new mathematical tools and variables (tortuosity for instance).