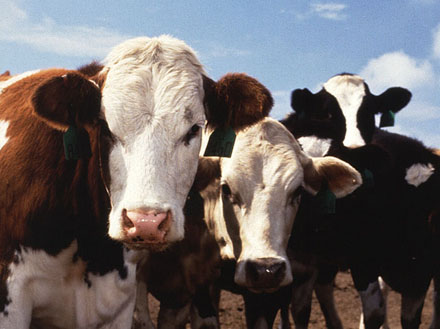 When most people think of climate change they envision billowing smokestacks, and diesel engines responsible for releasing carbon dioxide into the atmosphere. But they’re over looking a far more inconspicuous culprit – methane– emissions of which may be slowing down.

Methane is the second most abundant greenhouse gas, behind only carbon dioxide, according to the new report from the United Nations’ Intergovernmental Panel on Climate Change. The concentration of methane in the atmosphere had risen to 1732 parts per billion in the 1990’s from 715 parts per billion a century before. Since the 1990’s the methane level has only climbed to 1774 parts per billion, indicating that the rate of methane emissions are slowing.

Much man-made methane comes from a surprising low-tech source: “It’s cows burping,” said Elaine Matthews, a methane expert at the Goddard Institute for Space Studies, explaining that cud-chewing animals like cows and sheep, along with other agricultural animals and processes, release enough methane to double the natural concentration in the atmosphere.

Cow digestion accounts for 75 percent of the methane produced by animals. Bacteria in the animals’ multiple stomachs help them to break down their food, but the bacteria also produce methane as they do their work. The animals then belch it into the Earth’s atmosphere.

Attempting to get the most milk or meat from animals, dairy farmers and ranchers commonly feed their cows three or four times the amount necessary for the animals to maintain their weights. Because a cow’s methane production depends on the amount of food they eat, overfeeding increases methane emissions.

Scientists have been testing ways to control methane emissions by trying to enhance the quality of the animals’ feed and by using feed additives. A 2004 Journal of Animal Science Paper showed that feeding dairy cows sunflower oil decreased their methane emissions by 20%. Some countries, particularly New Zealand, have been looking for ways to cut the number of animals used to produce the same amount of agricultural product.

Matthews attributes the slowing of methane emissions to two human practices: a decreasing number of cud-chewing animals in industrialized countries, and maximization of rice crop yields. Rice paddies release methane because they contain anaerobic bacteria similar to those in cows’ stomachs; modern production practices have optimized the area available to grow rice, so methane emissions from rice cultivation have stabilized.

However, estimating the impact of methane on the Earth’s climate can be difficult due to the series of chemical reactions it undergoes in the atmosphere. After being released, methane combines with water to produces water vapor and carbon dioxide – both of which are greenhouse gases– as well as ozone, which is also a pollutant.

All of these chemical byproducts stay in the atmosphere and make methane’s contribution to warming hard to determine because of their indirect effects. “It’s a little imprecise,” said Gavin Schmidt, another climate specialist at the Goddard Institute.

A 2002 Environmental Protection Agency report estimated that methane lasts 9 – 15 years in the atmosphere and has a global warming potential, or climate impact, 56-times that of carbon dioxide over a 20 year period; although that drops to 21-times carbon dioxide after 100 years because methane degrades at a faster rate.

Methane concentration also depends on the atmospheric level of water vapor that is necessary for the breakdown reactions. When the air is warmer and wetter, the concentration of methane is lower. This means that the levels fluctuate from year to year and it’s another way methane differs from carbon dioxide, which is present at fairly stable levels.

Emissions levels are also hard to predict because half of methane emissions come from naturally occurring sources that fluctuate due to environmental changes. Most natural methane comes from bacteria that live in wetlands and marshes, which multiply quickly in wet or warm seasons. “There’s no trend that people can see. [Wetlands] really dwarf everything else,” explained Matthews.

A New Twist On Tree Rings: Scientists turn to tree rings to learn more about our climate’s history.

PLEASE, get more of this information out into the mainstream media and onto the front page!

Wetlands may be the biggest single source of
methane, but I don’t think its fair to say
they dwarf everything else. Anthropogenic methane
is generally thought to be bigger than natural
sources.

Enteric fermentation is the biggest source of
anthropogenic methane usually estimated
at about 80 mega tonnes per annum, compared
with 120 or so for wetlands.

In Australia with 28 million cattle and 110
million sheep, it is a bigger climate forcing
than all our coal fired power stations.

In many other big cattle producers, this is also
true. In the US however, livestock are about
number 4 on the list of big methane sources
behind gas, coal and landfill. In the US you
only have 100 million cattle for 300 million people and not many sheep.

Since Al Gore is from an old cattle family, methane from cattle was ignore in his film. Such
is the power of vested interests.

Methane isn’t overlooked by scientists, just the IPCC, a UN voting body … methane has 20X the heating effect of CO2 and each cow produces enough per year to fill a hot air balloon.

It is the second most prevalent greenhouse gas in quantity but number one in warming effect. CO2 just got more attention because the two big countries behind Kyoto, France and Germany, picked a problem they could easily fix in their countries. France met its CO2 target by switching to more nuclear power, hardly a welcome solution to US environmentalists. Germany met its target by negotiating a target date just before the merger with East Germany – so all they had to do was close a few Soviet-era factories and they met their CO2 goal.

CO2 was highlighted because it could cripple the US if implemented, the best way for Europeans to compete, not because the science is sound. Otherwise, Kyoto and its CO2 curbs would not exempt China, India and Mexico.

We should genetically engineer cows so that they fart less, obviously. The problem disappears with less methane.

Increasing (funding) resources to artificial meat grown from animal stem-cells and increasing (subsidizing) wheat imports to China and/or increasing (tech transfers) indigenious Chinese wheat output, are two solutions that prest themselves to me.
In addition to the *existential* threat posed by Global Warming, growing meat in petri-dishes also staves off pandemic threats.

thanks it helped for my homework

Well , Al Gore may have ignored cows because unlike car exhausts and power station the emmsions ( methane ) is produced from recycled CO2 from the atmophere . Not even wind power recyles CO2 .

think about when u eat a steak , or a loaf of bread – where is the carbon comming from thats in that food ….

jjjaaaazzzz i better b able to have kids !

This is alex. I must say I do take offence at Jasmine’s POOR atempt at grammer and spelling. She is only re-enforcing the rumour that she is both mentally and physicaly troubled. I would be delited if people would post other comments to bolster my opinion.
Many thanks,
Alexandra Katherine Reindorp
XD
PS: Hi Melanie my love!

Well really. Dominic I do not remember asking for your opinion, you over reacting, immature baby rectum.

lolz Alex is on google Cooooooool

thank you.This is useful information to me

This article will assist the internet viewers for setting up new weblog or even
a weblog from start to end.