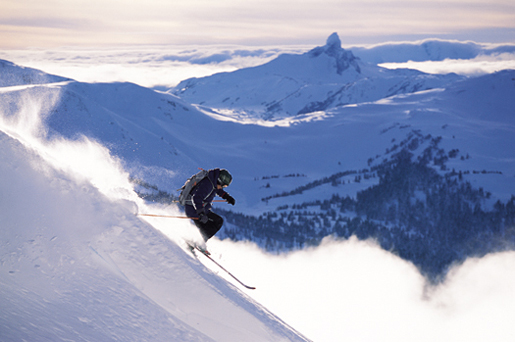 Snowflakes crunching underfoot, white banks glinting in the sun, powdery ice crystals spraying off the edges of your snowboard. Skiing down a snowless slope on slick Teflon fabric just wouldn’t be the same. But ski areas across the country and around the world may need to consider just such an alternative if global warming continues unabated.

The latest summary report from a climate change study headed by the United Nations lends credence to suspicions that global warming may reduce snow cover and diminish winter tourism.

“All the ski areas are watching all that’s going on quite carefully,” according to Jeff Knight, operations manager at Mount Abram Ski Resort in Greenwood, Maine.

There is strong evidence that climate change impacts tourism and much of this research was included in the report, said Thomas J. Wilbanks of Oak Ridge National Laboratory, who helped write the tourism-related section of the document. Distinguishing the effects of human-caused climate change from natural climate variability is a challenge for climate researchers, Wilbanks said, but changes in glaciers, ice pack and snowfall are somewhat easier to determine.

In Switzerland, for example, the huge and lucrative winter tourism industry risks losing almost half of its “snow-reliable” resorts by 2050, according to the World Tourism Organization, a United Nations agency. “Snow-reliable” resorts get 12 to 20 inches of snow on at least 100 days over 70 percent of ski seasons.

“Winter as we traditionally knew it seems to be coming steadily later,” he said. Whereas snow used to fly around Thanksgiving in Zurhost’s area, amassing eight to 12 inches by Christmas, Black Mountain has had no coverage at all for the past two Christmases. Instead, the resort had to rely on snowmaking equipment, using fan guns to spray an aerosol of water that becomes snow in cold weather.

Not only does making snow cost resorts money, it’s also of poorer quality than the natural brew. And regardless of how much artificial snow is on the slopes, sales tend to suffer just when the customer base takes longer to get in a wintery mood.

“If people don’t see snow in their backyard, they’re more likely to pick up their gardening tools or golf clubs,” Zurhorst said, adding that Black Mountain did not break even this year. This also affects related industries like restaurants, hotels, ski equipment stores, and gas stations.

The decline in natural snow also prompts actions that exacerbate the initial problem. “[There’s an] interesting chicken and egg, push-pull effect going on here,” Zurhorst said of the ski industry’s response to climate change. “Here we have global warming. To combat [it], we’re making snow. To make snow, what do you do? Use a ton of energy.” This generates even more greenhouse gases, acknowledged Zurhorst.

Feeling guilty about the impact their sport is having on the environment, some environmentally-minded ski areas are buying windmill-generated power – or carbon offsets – in an attempt to combat the problem, said Josh Burns, owner of Mount Abram’s.

In terms of long-term solutions for barren slopes, Zurhorst said that one possibility is “repurposing” ski areas with slick Teflon or polyester surfaces or using roller skis that would not require a slick surface.

Even as some ski area professionals prepare for such serious scenarios, others find hope in the possibility of positive change.

“[We] need to be cautious about declaring the death of the ski industry,” said Geraldine Link of the National Ski Areas Association. She pointed out that the dire predictions assume a “do-nothing approach” to global warming. Link suspects Congress will take action to reduce carbon dioxide emissions, a key contributor to climate change. To encourage such action, the National Ski Areas Association and the Natural Resources Defense Council (NRDC) have been running a “Keep Winter Cool” awareness campaign since February 2003. The campaign advocates actions to reduce pollution that causes global warming, from supporting legislation in Congress to a Web site telling the public how they can reduce their own impact on global warming. Olympic gold medalist skier Picabo Street supports the campaign, as do several other top athletes, said Julia Bovey of NRDC.

While winter tourism may lack the dramatic cachet of other hypothesized climate change effects like destructive hurricanes or city-swallowing seas, Bovey noted that winter sports may be an ideal vehicle for raising public awareness of climate change: “It’s always human nature – sometimes it’s not until you notice something in your own life that it becomes real for you.”

Jennifer…..I read your article on “Soggy Slopes” with great interest. I feel your research could stand a bit of improvement.
Mr. Zurhorst has been in the ski business for two winters. I feel his experience should not be used as guide for your writings. I have lived in Maine all my life and I have certainly seen many winters that had no snow at Christmas. That’s why ski areas put in snowmaking. They wanted to guarantee that vacation business.
And further, what about the winter of 1980 when there was no snow in the East until March? Global warming?… I don’t think so. What records have been kept prior to one hundred years ago to tell this hasn’t happened before? The earth has constantly shifted from ice ages to brief warm periods.
I think you may have been alot better off if you contacted people with experience in this business and the weather business for their expertise.
A website to go to fyi is http://www.omichron.com/globalcooling.html., you’ll get an entirely different outlook. Respectfully, Jeff Knight

I love snow and I am very upset over the effects of global warming. I go snowboarding every weeekend and it seems that in the last few years the snow condidtions have gotten worse. I am very pleased to see a website like this that is so against global warming, it makes me realize that there are many others along with myself that want global warming to have as little of an effect as possible.

This is looking soo cool i am loving it.