How environmentally savvy is your urban chariot? 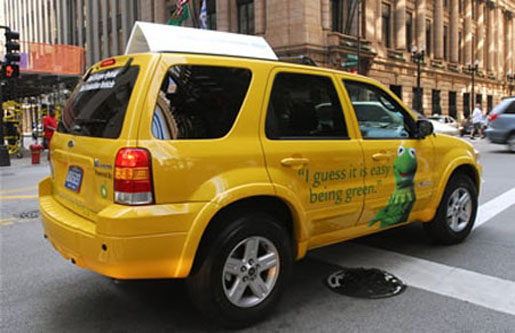 Note to New Yorkers: the corner of 28th Street and 10th Avenue in Manhattan is a great place to catch a cab. Drivers visit Taxi Club Management, Inc. there weekly to get their meters reset and slip lease payments over the counter. A sign on the front window advertises: $3,500 down to lease a 2007 Ford Crown Victoria, the standard taxi model.

“The Crown Victoria: for the taxi industry, that’s a workhorse,” said Taxi Club co-owner Gene Freidman. While 150 of Freidman’s 750 taxis are environmentally friendly hybrid cars, he still depends on the Crown Victoria, a car he compares favorably to the limousine. But the Crown Victoria’s popularity comes at a steep environmental price. The yellow sedans practically inhale gasoline–-up to a gallon an hour-–and their time spent idling in New York traffic contributes to the city’s air pollution.

Traffic-related pollution accounts for about 62 percent of New York City’s carbon monoxide emissions, 45 percent of its nitrogen oxide emissions, and 23 percent of volatile organic carbon emissions, according to the State Department of Environmental Conservation. At any moment, half the vehicles on Manhattan streets are taxicabs. The city’s yellow fleet, 13,000 strong, consumes an estimated $1 million worth of gasoline every day. That number may shrink as the fleet welcomes more hybrid cars and other alternative technologies.

New York City started regulating existing taxis to shrink their environmental footprint several years ago. The Department of Motor Vehicles requires taxis to meet the same emissions standards as other cars, said DMV spokesman Tom Apple. In order to keep up with private cars, taxi drivers must take their vehicles in for 3 times as many inspections as private cars, and they don’t get the age exemptions that private cars receive.

Taxicabs must begin service as new cars and serve no more than five years, three if multiple drivers share it. In other cities, used cars can become taxis and serve for up to nine years.

Taxi-related damage to the city’s air quality has dropped since taxi retirement became mandatory in 1996, said Allan Fromberg, deputy commissioner of public affairs for the Taxi and Limousine Commission. That’s because new cars pollute less than older cars. Still, a better, faster solution to the air pollution problem is needed.

Switching over to hybrids seems like the next logical step. Today, New York City has 375 hybrid taxis in its fleet—only about 3 percent of the total number of cabs in the city, but it’s a promising start. Representatives from environmental groups say hybrid taxis could make a significant dent in the city’s carbon dioxide emissions.

Taxis spend a significant amount of time idling as passengers depart and arrive, and hybrid cars are perfect idlers. At low speeds, explained Bob Muldoon, New York City Sierra Club representative, hybrid cars use only the electric component of the engine, emitting much fewer exhaust fumes. “When it comes to New York City and taxis, [the hybrid]’s perfect for stop and go traffic,” Muldoon said.

The Ford Escape may also be a more economical option for cab drivers. Because city council voted to allow one additional driving year for hybrid taxis, drivers will not only pay less at the gas pump, they’ll also get to keep their vehicles longer.

At Manhattan’s Taxi Club, Freidman estimates that each of his hybrid taxis uses about one third as much fuel as an all-gasoline taxi like the Crown Victoria—that’s about $12 per shift versus $35, which adds up to significant savings in a year. If all 13,000 taxis switched to hybrids, “[it’s] $600,000 staying in their pockets or going somewhere else in the economy rather than going literally up in fumes,” Freidman said.

While larger cars like the Crown Victoria are typically considered safer in accidents, Peter Schenkman, who works in the Taxi and Limousine Commission’s safety and emissions division, stressed that all hybrids used as taxis have passed federal safety standards. In fact, Friedman suggests those smaller hybrid cars may actually improve safety. “You have a taxi driver that’s driving a fleet car, he needs to make his money,” he said. “They’re saving about 20 dollars on gas a day, [so] they can be a lot less aggressive on the road.” He added that his hybrid cars are involved in fewer accidents, fewer claims, and have less wear and tear.

Farman Papayev, who has driven a taxi for six years and a hybrid taxi for six months, said that he and his customers like the roomy, comfortable Ford Escape. But other types of environmentally friendly taxis haven’t fared as well.

The “clean fuel” natural gas taxis that the New York State Energy Research and Development Authority has been promoting may lower carbon dioxide and other greenhouse gas emissions, but the scarcity of fueling stations – there are just two in Manhattan – make the cars impractical.

The original 300 compressed natural gas taxis have retired, and while the state’s program hopes to add 300 new ones, it has only sold 18 replacement cabs so far. Peter Bolton, the program’s senior director, acknowledged that some drivers dislike the fact that they can’t fill up at a regular gas station, but said others appreciate paying $1.50 to $1.70 for the equivalent of a $3 gallon of gasoline.

Another new taxi, brought to New York in March by a North Carolina company, needs no gas at all: it is powered entirely by a lithium ion battery–the same type of battery in cell phones. But this experiment had unexpected glitches too. The electric taxi did not perform as well as expected once the battery, manufactured in the warmth of North Carolina, met the cold of Manhattan in late winter.

Still, the company is enthusiastic about breaking into the New York market. “If you can do it in New York, you can do it anywhere!” exclaimed Richard Griffiths, business development director for Hybrid Technologies, Inc., noting that New York City embodies extremes–-in both traffic and temperature.

The Taxi and Limousine Commission’s Schenkman predicts that far more of these no-gas cabs will roam the Big Apple in five years now that Hybrid Technologies realizes that the battery requires more heating.

At Taxi Club, Freidman is ready to embrace alternative technology. He’d like to replace all his Crown Victorias with alternative vehicles. “I was reading the magazines… that hybrid technology, whether it be hydrogen or electric or natural gas… is the future, everybody was working on it,” Freidman said. “I said listen, it’s the future, so why don’t I get in ahead?”

This is a good start for the environment in new york city, even as a yellow cab driver I can’t figure out myself driving and vehicule than crown victoria. I wish ford company is thinking seriously about this.
http://www.nycitycab.com