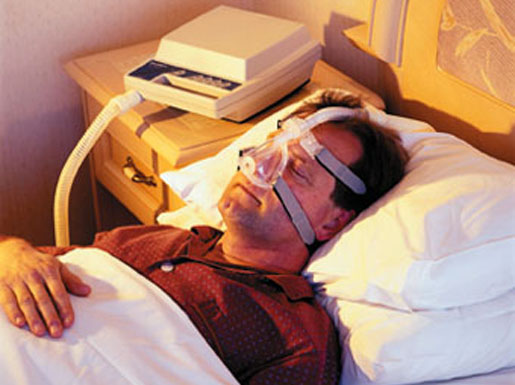 Ravi Persaud had just gotten to work, but already he could tell it was going to be a long night. Persaud was one of two sleep technicians on the overnight shift at the New York University Sleep Disorders Center in Manhattan. The “sleep lab” had a full roster: three of the five small private bedrooms already held a patient, and the other two would be filled within hours. Persaud’s next patient arrived at about 9 p.m. He asked to be identified as “Bob.”

Bob, one might say, is a satisfied customer: for the last 12 years, he has been under treatment for his sleep apnea. The sleep disorder occurs when collapses of the airway jolt the patient from deep sleep to lighter sleep or even wake the patient, gasping and choking. More than 12 million Americans suffer from sleep apnea, according to the National Heart, Lung and Blood Institute, but many of those may not realize their symptoms point to a treatable diagnosis. At the NYU Sleep Disorders Center, patients spend a night having their sleep monitored and test-driving – or test-breathing – treatment.

“At first I laughed it off,” Bob said, when experts first suggested that his daytime sleepiness and inability to sit for long periods might be due to sleep apnea. Eventually, he got evaluated, and he has been on continuous positive air pressure (CPAP) treatment ever since.

While he sleeps, Bob wears a facial mask that is linked to a small machine via a plastic tube. The humming machine pumps a steady stream of air through the tube, keeping Bob’s airway open as though it were blowing up a balloon.

CPAP is “like sticking your head out of a car window and trying to breathe against the air,” said David Silberstein, a pulmonary and critical care specialist who is currently a fellow in sleep medicine at the NYU Medical Center. While some patients find this uncomfortable, it is an effective treatment for those who can follow it.

“I would love to not need it,” Bob said, but admitted that he does not sleep without CPAP. If he falls asleep in his recliner without the CPAP machine, he said, he wakes up gasping for breath.

For some sleep apnea patients, a disrupted night may be only one of several symptoms. In severe cases, sleep apnea may increase the risk of high blood pressure, heart attack or stroke, according to the National Heart, Lung and Blood Institute. These consequences make it especially important for patients to identify the problem early as Bob did.

Sometimes, Bob has encouraged others to come get evaluated for sleep apnea. “I can tell right away when someone is having [a] problem,” he said. Even Bob’s treatment still requires tweaking. After a sudden bout of restless, anxious nights, Bob decided to get reevaluated.

He donned his pajamas, and sleep technician Persaud prepared him for the night–measuring his head and marking spots corresponding to specific areas of the brain. Swabbing ointment over the marks, Persaud applied an electrode to each. More electrodes soon adorned Bob’s chin, chest and legs, with a wire trailing each to a single control box hanging around his neck.

Bob’s electrodes would record his brain waves, breathing and eye and body movements in 30-second segments to determine how much time he spent in each of the five stages of sleep and how many times he awoke. In natural sleep, the sleeper descends through four stages of increasingly deep sleep, at last reaching REM sleep, a period of rapid eye movement which is when you dream. The sleeper naturally cycles through these stages several times in one night’s sleep, except when sleep apnea disrupts the cycle.

“I’m all wired up!” Bob chuckled as he retired to his bedroom and joined three other patients in slumber – or at least the attempt at it. The fifth patient would be arriving later.

Persaud and his colleague, Sharon Osborne, huddled over the computer display of Juan Jaramillo–the patient with the worst sleep problems. The lines on his readouts were jerky and irregular, contrasting with the docile peaks and valleys of a soundly sleeping patient. The blurs and jitters on Jaramillo’s screen corresponded with the black-and-white video of him tossing and turning.

Once a security guard at Ground Zero, Jaramillo eventually realized that on a snowy day, he would be the only person out of breath. He was diagnosed with cardiomyopathy, a heart condition, in 2005, which in his case, was associated with obesity and sleep apnea.

Around 11 p.m., Jaramillo awoke and asked to take a break from trying to sleep. “I had a dream that I was crying, sobbing, and you came to my rescue,” he told Persaud.

“You don’t sleep in your own bed …” Jaramillo offered, explaining why he was “not used to being hooked up.” Gesturing toward the mask on his face, he said that he felt like Darth Vader.

“It’s uncomfortable, but it seems to work,” he admitted of the bilevel machine. A cross between CPAP and a ventilator, the bilevel machine alternates the blowing pressure of CPAP with opposite pressure, regulating both inhalations and exhalations.

Back at the monitor displays, Persaud noticed that a line on Bob’s readout was jerking to the top of its zone and leveling off for a few seconds before plunging again and starting over– the sign of a disconnected sensor. Bob may have been having an erratic night because of sleeping on his back. Osborne said that sleeping on one’s side is better.

At about 1 a.m., things quieted down enough for Osborne and then Persaud to slip out and get some food. One might expect a night in a sleep lab to be restful. “That’s what I thought this job would be when I took it: just sit here, keep an eye on people,” Persaud said with a grin.

The hectic night finally brought a reward of relief. At 3:59 a.m., Jaramillo fell into a deep sleep as the technicians found a good angle and height of his bed and the right speed of his bilevel machine, and as, after a night on his back, he rolled onto his side. “It’s, like, amazing,” Persaud observed.

As 6:30 approached, and the technicians woke Bob and the other patients, they decided to let Jaramillo continue sleeping. The daytime shift technicians would wake him and help detach his electrodes, while examining each 30-second “epoch” and determining his stage of sleep to determine the pattern of time he spent in each stage. The sleep lab’s doctors could then choose a treatment regimen.

As Persaud detached Bob’s electrodes, Bob waggled his fingers, indicating that his night had been “so-so.” After his 12-hour shift ended at 9 a.m., Persaud would have the day off, meaning he’d have time to sleep.

I am over weight by at least 80 lbs and I have had this problem because of my weight peroid. I know this becasue when I have been lean I sleep plus I am in a relationship that is loving and I have less stress from work because I have a goodman that really helps to take pressure from me a a great sex life.