Drilling for Energy, But Not Oil

Geothermal wells increase in popularity as a fossil fuel alternative. 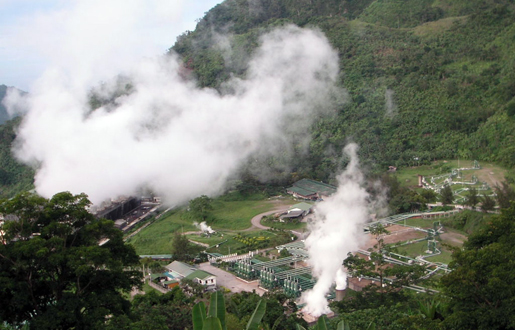 From a room underneath the sidewalk in New York City, stark, white pipes plunge more than 1200 feet into the depths of the earth. There they whisk water to the surface where it regulates the temperature inside a futuristic brick-and-glass building occupied by the Center for Architecture in lower Manhattan.

“Our heating energy is not from Con Edison. It’s coming from beneath the earth’s surface,” says Rick Bell, executive director of the 15,000-square-foot center, which is the home of the New York chapter of the American Institute of Architects.

Bell opens the door to a room underneath LaGuardia place in Manhattan’s Greenwich village to reveal a system of pipes, made from recycled plastic, that emerge from underground and meander about 50 feet through the building. “It supplies us with constant air of about 55 degrees, even on the coldest winter nights and the most sweltering summer afternoons,” he explains. The temperature is well suited for a space regularly visited by large groups of people.

The popularity of geothermal heating and cooling has increased rapidly—even President George W. Bush has a geothermal system at his ranch in Crawford, Texas. In addition, experts are looking towards the technology as a way to provide clean electricity. Although geothermal energy makes up just half of one percent of the total energy consumption in the United States, demand jumped 13 percent from 2001 to 2005, according to the federal Department of Energy. In January, the Massachusetts Institute of Technology released the most extensive report on the geothermal power generation in thirty years.

New York is no exception to the trend. The New York State Energy Research and Development Authority (NYSERDA), which gives money and technical help to builders who use alternative energy sources, reports that 63 geothermal projects have been completed since its aid program began in 1999. Forty-six more projects are in the works.

“The number of applications and installments continues to go up,” said Gregory Lampman, a project manager with the state authority.

But some experts fear high installation costs might scare off potential buyers. Homeowners who use geothermal heat pumps can save 30 to 70 percent on heating and 20 to 50 percent on cooling, according to federal estimates, but installation in a typical home costs about $7,500. The amount of time to recoup the cost is about six to twelve years according to Lampman. Prices for business, schools, and government buildings can be in the hundreds of thousands of dollars, depending on ease of drilling and number of wells needed.

That’s why residential geothermal systems need incentives, according to Jeff Tester at MIT and the lead author of the comprehensive study of the systems sponsored by the Department of Energy. In April, 2007 he testified on about the feasibility and cost of geothermal power to the House Committee on Natural Resources.

In New York, NYSERDA paid the $100,000 cost for the wells at the Center for Architecture’s as well as an additional $600,000 for wells at the Brooklyn Children’s Museum. “Going green is expensive, but it is supposed to be better for the environment and less expensive overall,” said Linda Adams, a project manager at Brooklyn’s Children Museum.

In a typical open loop geothermal system, water from a source deep in the ground—such as a well, pond or lake—returns to where it came from after circulating through the building’s temperature-control system. In a closed loop system, like most in New York, a loop of pipe with water or antifreeze simply dips down into the ground and absorbs heat. Such systems are “like water in a spaceship,” said Bell, where the same fluid continually re-circulates.

At the Center for Architecture the water in the closed loop system goes over a heat plate connected to a heat pump transfers the energy into heating or cooling. The change in temperature diffuses throughout the building via ducts.

These somewhat small installations make economic sense in places like New York, but elsewhere in the United States, experts want to harness geothermal energy for power generation. A key finding of the MIT study is that geographic differences play a huge role in determining whether geothermal power is economically feasible.

Reaching such necessary temperatures in the Northeast is “technically and economically not feasible.” according to Brian Anderson, an assistant professor of chemical engineering at West Virginia University and a co-author of the MIT study. He estimates it would cost $20 million to dig deep enough in the Northeast to find rock temperatures of 400 degrees, compared to the National Geothermal Collaborative cost estimate of just $1 to $5 million in some parts of the West.

In Manhattan, the Center for Architecture had to dig down 1,260 feet – the length of the empire state building without its antenna – to find rock warm enough to serve as a source of geothermal heating. It took 40 hours over three weeks in August 2003 to dig the two wells. Even though the geology of Greenwich Village is different from other parts of Manhattan, workers were surprised to find bedrock. “The village is mushy and swampy…we were shocked to find bedrock 45 feet down,” says the center’s director Bell

In addition to geology, New York City presents other challenges to installing geothermal systems. “The city is difficult with traffic and permits,” said Leonard Rexrode, president of Aquifer Drilling and Testing, a company that installs geothermal heating systems. “Also, one needs a lot of ground, which is not readily available in New York City,” Buildings tend to take up all the land they sit on, and the logistics of finding suitable space are difficult. Rexrode’s next project is installing geothermal heating in a glass building, not yet constructed, in the middle of Times Square.

Critics of geothermal heating don’t question its effectiveness in reducing energy bills, but they do worry about the unintended consequences of the technology.

“Geothermal heating is accepted as a source of energy, but it is not completely free of impacts on the environment,” said Alper Baba, a professor of geological engineering at Canakkale Onsekiz Mart University in Turkey.

But even closed loop systems can cause contamination, according to Baba. The metals in the water may corrode the pipe, causing leaks into the ground. “There are trace elements like iron, manganese, boron, and arsenic in geothermal systems,” he said.

With geothermal power plants, which draw very large volumes of water, there is even some evidence that drilling can trigger earthquakes. An earthquake in Basel, Switzerland on December 8, 2006 was reported to be a result of a change in ground pressure due to a geothermal construction site. The quake measured 3.4 on the Richter scale, a minor earthquake, and was followed by 60 less severe aftershocks.

“Every geothermal system in the world has seismic activity,” said MIT’s Tester, adding they are generally tiny events caused by stress releases in the rock.

“There is some risk of earthquakes from rocks breaking underground and water flowing,” said Anderson, the West Virginia researcher who contributed to the MIT study, but agreed that most quakes are so small that people aren’t able to feel them.

Advocates of the technology generally dismiss these concerns. “There is no indication that individual geothermal systems cause seismic activity,” says John Kelly, the Executive Director of Geoxchange, an organization that promotes geothermal heating. Although the website does encourage people considering open loop systems to consult Environmental officials, Kelly said groundwater contamination is a “light concern” and adds there is “minimal risk” of environmental pollution.

Public awareness, and confidence, will be crucial for geothermal energy to catch on as a major source of energy. At the Center for Architecture, Bell aims to incorporate the subterranean geothermal heating unit as part of a regular exhibit that people can see even from up above ground.

“We want to put a glass cover plate up here” he points to the ceiling above the white pipes, which leads up to the sidewalk. As people walk by they will be able to look down and see the white pipes vanishing deep inside the earth. He also plans to replace the door to the room with glass so the public can view the unit from the inside the center as well.

Already, just outside the door of the geothermal system is a “geothermal gallery” with diagrams and information about the alternative heating and cooling. Bell hopes to educate real estate developers, engineers, architects, financiers and the public about geothermal systems.

“We are trying to prove by operating this space that geothermal can be done efficiently and economically,” said Bell.

Can you recommend any companies that I can consult with regarding getting an estimate to install a geothermal heat pump on my property in Lawrence NY?

$7,500??? I don’t think so. I paid nearly that much just to put in two conventional AC compressors (JUST for the compressors). I’m pretty sure a simple residential geothermal installation is at least $20,000 and possibly much more.

Chuck, you can’t guess based on what you paid for AC compressors (especially considering that geothermal does not require conventional compressors to operate its AC system). It depends on what type of loop you get, where you live, whether you already have forced air or need to add forced air ducts, etc… in our area, you often hear $15,000. The most expensive part is drilling.

Drilling is the most expensive part – that is why I am going to invent a better drill.

Chuck appears to be an ordinary American Citizen that has never been required to understand energy – Dios mios!