A new type of laser scan could detect cancer before it spreads too far. 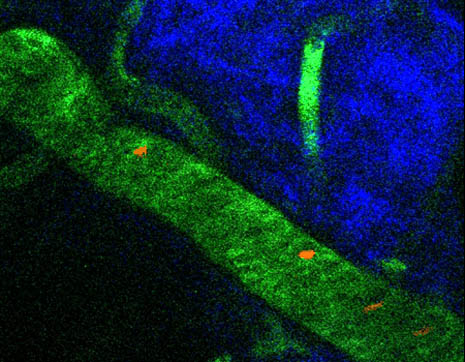 This magnified image shows the skin in a live mouse. Red represents cancer cells, green marks the blood vessels, and blue shows the tissues under the skin. [Credit: Wei He]

Researchers at Purdue University recently discovered a way to race ahead and track down cancer before it can form new tumors in a patient’s body. A noninvasive laser scan could give physicians the upper hand in treating cancer by catching tumors right when they begin to spread.

Developed in the lab of chemist Philip Low, this technology improves on a current cancer detection test while eliminating the need to draw blood altogether. The laser analyzes blood flowing through the body to find circulating tumor cells (CTCs), which act as red flags signifying a primary tumor is malignant and spreading, or metastasizing.

Once CTCs leave the original tumor, they enter the bloodstream and can settle in different organs to initiate new tumors. “Metastatic tumors constitute the major cause of mortality among cancer patients,” explained Wei He, a principal researcher in Low’s lab. “At the metastasis stage, the cancer is kind of out of control.”

At the earliest stages of cancer, CTC levels are too low for the conventional test to detect. Instead of testing only a small blood sample, the laser can analyze a patient’s entire body of blood, drastically improving the chances of catching CTCs before they can form another tumor. The prototype technology can scan 100 milliliters of blood per minute, making it over 100 times more sensitive than the blood-drawn test.

In a study published this summer in Proceedings of the National Academy of Sciences, the Purdue researchers used the new laser scan to find CTCs in the bloodstreams of mice just two weeks after inducing cancer in the animals. A conventional blood test could not have detected the cancer until two to three weeks later.

The laser technique requires that cancer cells in the blood are labeled with a fluorescent probe so that they glow when they are hit by the laser beam. The probes have a specific affinity for certain molecules that are on the surface of cells. When they attach, they dye the cells, making them stand out from other cells flowing through blood vessels. The probe that was used specifically in this research, called a “folate conjugate,” can recognize cells of ovarian, endometrial, kidney and non-small cell lung cancers.

Although the technique has not been properly tested on humans yet, the researchers detected ovarian cancer cells in blood samples from cancer patients. Human trials, which will test if the laser can find cancer cells circulating through the bodies of cancer patients, are expected to begin within a couple of years.

The Purdue group spent several years finding a probe that would maximize the accuracy of the laser test by binding specifically to the cancer cells they wanted while avoiding false positives. With an approach like this, said New York University immunologist Carol Shoshkes-Reiss, “you have to know where to look and what you’re looking for.”

To prove their probe’s efficacy, the researchers injected cancer cells into the backs of mice to induce tumor growth. They then injected the mice with the probe. After two weeks, the laser could detect CTCs in the bloodstream when the researchers shined it along shallow blood vessels in the mice’s bodies. He explained that these CTCs had spread into the blood from the tumors his team had produced on the mice’s backs.

The success in detecting CTCs during the early stages of mouse cancer is promising for humans, He said. He and the rest of the Purdue team are currently awaiting federal approval to begin a human clinical trial, which would probably require five to 10 years. With feedback from participating physicians, the team will then be able to adjust and perfect the technique for widespread use in monitoring cancer resurgence in patients. The researchers estimate the scan would cost about $200 per test, about the same as the conventional blood test.

This technique would give physicians more useful information than they currently have, since the results go beyond just diagnosing cancer, according to Frank Diehl, a research fellow at the Johns Hopkins Kimmel Cancer Center. The ability to determine how much cancer is flowing in the bloodstream would also help doctors monitor patients and understand the effectiveness of treatments.

According to He, a second probe to detect prostate cancer cells is almost ready. In the future, the laser diagnostic could be useful for other cancers and even for other diseases, such as malaria, if the appropriate probes can be found, he said.

Read about a lab developing nanoparticles to search for specific types of cancer in the body.

Learn how scientists are using scorpion venom to treat a rare and lethal type of brain tumor.

Discover how dogs may be able to sniff out people with certain types of cancer.

I found the article to be very interesting and well written. Sounds like a major breakthrough in our fight on cancer!

Excellent article, quite informative, and, well written. Unfortunately it will take so long to perfect.

Very informative article. It was well written and made plain a complicated subject matter. It will be interesting to see the testing results as the research progresses to humans in a few years.