Tricking males into mating with other males may fight invasive fish. 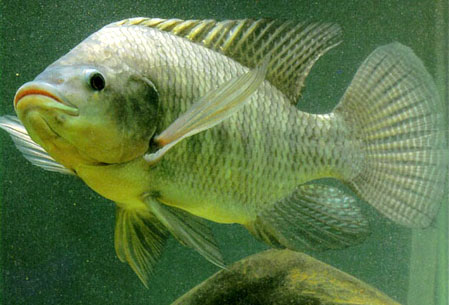 The Nile tilapia's days as an invasive species may be numbered. [Credit: World Fish Center]

Males masquerading as females may one day help get rid of invasive species, which cost the U.S. billions of dollars per year. Adding fish that look like females but that are in fact males — called feminized “supermales” — to bodies of water is a possible new method to control non-native fish, say researchers in Florida. Any time normal males fall for the costume, they should produce only sons, causing the population to eventually die out.

For the time being, the method exists only as an untested mathematical model for a specific type of fish called tilapia, and it is not certain that it could be applied to other species. However, “there are very few tools that exist presently to control exotic invasive species,” says John Teem, an invasive species specialist at the Florida Department of Agriculture and Consumer Services and the person who came up with the model. The lack of tools is why “a magic bullet type of approach,” as Teem calls the method, is exciting for some scientists.

Teem’s magic bullet is reproduction. In the lab, tilapia can be bred to have two Y-chromosomes, instead of an X and a Y like normal males, making them supermales. Then they are given hormones that make them physically female — even though their genes, which are nicknamed “Trojan sex chromosomes,” are male. Teem and Florida State University mathematics graduate student Juan B. Gutierrez, lead author on the paper of the model, predict that repeatedly adding these feminized supermales to a tilapia population will tip the sex ratio in favor of males so that the population will eventually go extinct.

Despite extinction’s negative connotation, scientists often strive to eliminate populations of invasive species. Invasives are estimated to cost the U.S. over $120 billion per year, according to a 2001 article in Scientific American, and are generally considered to be the biggest threat to biodiversity after habitat destruction. While their effects are hard to document, they can destroy habitats and kill or compete with native wildlife for food or space. Many invasive fish, Teem writes in an e-mail, “have been released as a result of human activity.”

The Trojan sex chromosome method is a promising way to eliminate invasive species because only a small number of feminized supermales — about 3 percent of the population size — needs to be added. But even for tilapia, which reproduce quickly, the model shows that eliminating a population may take decades and will require repeated releases of supermales as the originals die. In the model, feminized supermales are assumed to be as attractive, viable, fertile, and live as long as normal males and females, but this may not be the case in the wild.

However, the approach could trump existing eradication methods because it does not require the release of large numbers of another organism, killing all fish with a poison, or genetic modification, which can be controversial. Thus, it has garnered attention after its 2006 publication in the Journal of Theoretical Biology. Researchers at the University of Lausanne in Switzerland published a favorable but cautious review in Trends in Ecology and Evolution in September 2007.

The method may not work for other species or even the tilapia themselves since no experiments have been done. William Shelton, a professor of zoology at the University of Oklahoma who has studied fish for 35 years, expresses extreme doubts about the model’s practicality and effectiveness in a real-world setting. “Models are just that, they’re models; they’re not always based on fact,” he says.

Gutierrez and Teem acknowledge many possible limitations of their idea. A model can only incorporate the most significant aspects of a problem, Gutierrez explains. However, the authors plan to publish a more complex model to account for the spatial dispersion of feminized supermales and are applying for funding to begin experiments.

Gutierrez remains optimistic about the model. “The math is telling me that this would work,” he says. “Mathematics is the language of nature.”