Researchers link chronic loneliness to a change in gene activity. 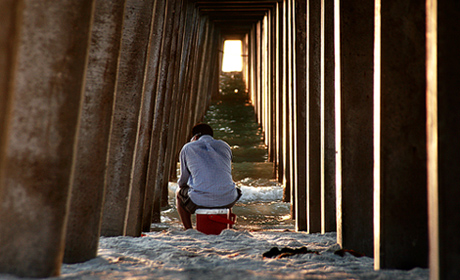 Loneliness may bring about specific genetic changes that can affect your health. [Credit: Brad Bisinger]

Mildred “Mickey” Warhola once dashed to tango lessons in her spare moments between child rearing and fundraising for a charitable foundation.

Now, the 79-year-old retiree uses most of her strength just to maneuver her frail 97-pound frame into a chair in the dimly lit room where she spends her days, mostly alone and incapacitated since the death of a long-time companion eight years ago.

With such severe health problems that have left her housebound, she has found herself increasingly alone over the years as her health has continued to deteriorate. But it may not be her illnesses that have made Warhola more isolated. Recent research suggests that, to the contrary, it may be her increased feelings of isolation that have made her more physically sick.

In the first study of its kind, researcher Steven Cole and his collaborators at UCLA and the University of Chicago have reported that a patient’s subjective experience of loneliness not only can affect the person’s health, as has been shown in previous studies, but can actually trigger a change in the activity of specific genes, causing an increase in inflammation and risk of health problems, from heart disease and viral infections to cancer.

Essentially, Cole and his colleagues have discovered a distinct genetic fingerprint for loneliness.

In his study published in Genome Biology in September 2007, Cole analyzed the activity of genes in 14 participants in the Chicago Health, Aging and Social Relations Study, looking for “conspiracies” among groups of genes in patients who scored in the top and bottom 15 percent of the standard UCLA loneliness scale.

Cole’s findings revealed several differences in how certain genes were expressed between the two groups: chronically lonely individuals over-expressed genes linked to immune system function and inflammation and under-expressed genes involved in the production of antibodies and antiviral responses.

The study may provide an important insight into how our psychological state can play into our biological one, raising the question: How lonely do we have to be to alter the function of our genes?

Based on his study, Cole estimates that people have to be in the top 10 to 20 percent of the loneliness scale to experience loneliness significant enough to impact them genetically. Such levels of social isolation are more constant and intense than just being lonesome for a night – chronic loneliness is incorporated into your daily life and the way you view the world.

Less intense feelings of social isolation may also affect the function of our genes, though this still needs to be explored in more depth.

“It is an interesting study and one more small step in our understanding of how genes and social environment may interact to affect health,” says Robert E. Roberts, professor in the Psychiatry and Behavioral Science Department at the University of Texas, who was not involved in Cole’s study. “While the study is noteworthy, the generalizability of the results needs to be confirmed by additional studies conducted by other researchers.”

Scientists hope, however, that with more research, understanding the impact of someone’s psychological condition on their genes can facilitate better-targeted treatments than are currently available. For instance, anti-depressants such as Zoloft and Prozac can only take the edge off the pain of chronic loneliness, while something as accessible as aspirin can dampen the physical effects of loneliness by reducing inflammation.

Cole’s findings suggest that the most effective way to help the chronically lonely may not be a pill, but rather in changing the way they experience the world – either through focused psychological therapy or by increasing positive human contact and companionship. But reframing a person’s world view is tricky, with some unwilling or unable to change their lifestyles to improve their psychological condition.

“[It is much] easier to defend people at the biological level than to remodel the social world,” says Cole.

While restructuring our social framework seems unrealistic, to create more effective treatments, it is crucial to understand how our psychological condition alters our genes and to what degree these genetic changes can trigger disease.

As for Warhola, she says she has shown marked psychological improvement since receiving a routine visitor three times a week and a nurse to care for her during the day. She now holds out hope for getting healthy. “One, two, cha-cha-cha!” she shouts, smiling at a visitor.

Why do people cry?

DNA Barcoding: how one man is revolutionizing how every species is identified.

Very interesting article – maybe that’s why my female Zebra Finch died within a week of her mate? It was a very sad week…

Wonderful piece Vickie! It makes me wonder how much the loss of social contact will be felt as ours and future generations are enabled by the Internet and electronic communications generally to interact virtually, rather than in reality. I bet there are already studies or profiles of the psychological toll of web addiction, but I wonder if they also delve into the physical costs. Keep up the great work!

I am a student at a middle school in illinois and I am doing a science fair project on genetics and fingerprints. I read online that your actuall fingerprint itself is based on blood pressur, but I also read that your fingerprint ridges are based on genetics. So it said that your fingerprint ridges should be a combonation of your parents. In other words if your mother has twenty ridges and your dad has ten, you should have fifteen ridges. Do you know if this theroy is true? If not, do you know anyone else I can contact? Thank you and please help me.

Feb.2, 2013
I have been unable to cry for many yrs. now. I am 65 yr old woman.
I am on 2 anti-depressants: effexor and wellbutrin . I was diagnosed with
Major Clinical Depression: age: 23. Have been on various anti-depr. meds since
Very rarely can I cry. I am very sensitive and emotional,.. but even if I
feel “moved to tears,” inside of me, emotionally,..most times I am unable to cry. This is very frustrating,..I wish I could cry, it would be a big emotional release for me. Like there is just a very big stone inside of me, a blockage, as it where, that does not allow me to cry. I feel very stressed and upset about this. Are there certain illnesses that cause people to be unable to cry,.. although they feel like they are crying “inside”. What causes this to happen. ? For what reasons.? Could this be genetic also ? Many thanks. It would help me a lot to understand this, as I suffer, most of my life, and most
days with this.

Glad there are others who cannot cry. I can if I think about past pets that have died when I need to. I have not been able to connect with a marriage mate due to deep belief systems. Always felt I could do better than what seemed to be laid out for me. I’d think, “are you kidding me?!!!” I’m now almost 68–female. Have to be honest and true to yourself. Sometimes we cant win for losing as they say………