Why you might not vote for the thing you want. 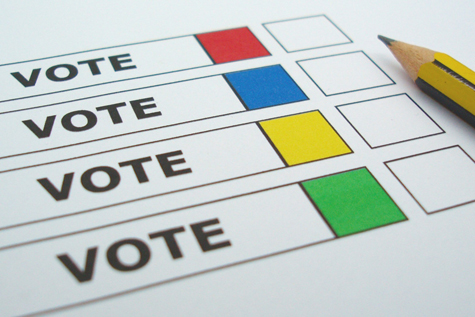 A New York University study may shed new light on what influences voters' decisions in an election. [Credit: Steve Woods]

Why do we bother to vote?

The only time our vote really matters is when it breaks a tie or creates a tie – when our vote becomes the swing vote. The chance of that happening in an election involving thousands or even millions of other voters is miniscule.

That people turn out in great numbers to vote, despite the overwhelmingly negative odds that their vote will matter, remains something of a mystery to those who study human behavior.

While many theories exist, a recent study involving human volunteers suggests there may be a rational strategy behind the seemingly irrational act of voting. At the center of the study is an economic theory known as the Swing Voter’s Curse, which could hold the key to solving the riddle of voter turnout.

“[The theory predicts] that we condition our vote on it being pivotal,” says Rebecca Morton, professor of political science at New York University and co-author of the study. What she means is that each voter treats his vote as if it is the pivotal vote, and this influences how and when he will make his choice.

To understand why the Swing Voter’s Curse predicts this mindset, we must first look back to 1996, when an economist and a political scientist at Northwestern University in Illinois noticed that a large number of voters weren’t voting on every ballot item – even when they were already standing in the voting booth.

It occurred to the researchers that this strange behavior might best be explained by how the voter views himself. Borrowing from an old economic concept known as the Winner’s Curse, they drew a complicated connection between real-world voter turnout, the hypothetical swing voter and the bidder in an auction.

The connection works like this: The auction bidder and swing voter both know that their bid or vote could decide an outcome. But they also know that information is “asymmetric” in auctions and elections, meaning that other participants might have slightly better or slightly worse information about the item or candidate.

The bidder doesn’t want to win and have paid too much for an item based on faulty information that overvalued it. And the swing voter doesn’t want to pay the post-election cost of picking an ill-suited candidate based on similarly incorrect information. So the auction bidder and the swing voter are both “cursed,” stuck trying to get the best result without paying too much in the end.

Both will try to win while conditioning their bid or vote to keep it as low as possible. The difference is that the swing voter can’t really lower his vote, so he simply chooses not to vote, and instead delegates it to those he thinks might be better informed.

To test if this abstention theory can predict real voter turnout, Morton and her colleagues boiled down an election to its most essential elements and recruited paid volunteers to participate in a computer-based election at the Center for Experimental Social Science at New York University.

Instead of voting for human candidates, a group of seven volunteers was asked to vote for one of two colored jars displayed on their computer screens. If their group voted for the colored jar randomly selected as correct, they received an extra monetary incentive. To recreate an asymmetry of information, the computer allowed some volunteers to see that one of the colored jars was the correct one.

Their experimental results show good fidelity to the theory: Voters with no inside information about the jars chose to abstain 91 percent of the time, essentially delegating their vote.

This seems intuitive: If you lack information, you are less likely to vote. However, one unexpected conclusion that the Curse creators derived from their theory is that the hypothetical swing voter, who would normally refrain because he lacks information, will vote when he knows partisans are present. Partisans are those who will always vote for one particular candidate, regardless of what information is available. The researchers’ data seem to back this up.

In subsequent rounds of the computer-based elections, the group was told that one jar had a slightly higher chance of being correct and that a certain number of partisans would vote for that jar no matter what. This time, those volunteers lacking inside information chose to vote against the partisans as well as the jar that was most likely correct – up to 58 percent of the time. Essentially, the involvement of “jartisans” increased the likelihood that uninformed voters would participate in the election.

“You vote because you know there are people that will vote against the correct thing no matter what, so you seek to balance them out,” says Morton. She adds that the voter will do this even if his information about the best choice would normally lead him the other way.

The results are still too preliminary to know exactly how this theory might play out in real-life elections. However, Morton suggests that in the real world, elections may not be nearly as one-sided as they could be because of this “balancing out” effect from undecided voters. She adds that campaign strategists may be aware of this phenomenon and intentionally try to downplay how far ahead their candidate is in the polls.

However, not everyone is convinced that such economic models and highly controlled experiments hold the answers to predicting voter turnout.

“You have to hold human behavior constant or assume that people will behave in a certain way, and I’m not sure that’s the way things work in the applied environment,” says Bob Meadow, political strategist with Lake Research Partners, a political consulting firm in Washington, D.C.

He says that voter history and intensity of opinion about a candidate or issue are more important factors in predicting how many people will turn out on an election day.

While Morton and her colleagues’ work remains unpublished in a peer-reviewed journal, she says their newest results from an even larger study involving more volunteers will appear in the May edition of the American Economic Review.

In the meantime, as undecided voters get ready to vote in the 2008 elections, we might take pause and wonder if they are really voting for what they want, or just trying to balance out those who will vote one way no matter what the circumstances.

I read this paragraph completely concerning the comparison of newest and earlier technologies,
it’s remarkable article.