Is it true that an astronaut brought an iPod to space? What other weird stuff has made that trip? 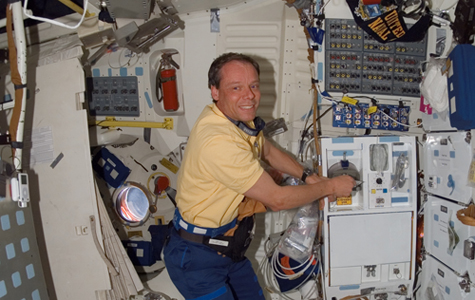 Can you spot the iPod in this image of astronaut Christer Fuglesang in the galley of Space Shuttle Discovery? [Credit: NASA]

**Changes were made to this story on April 10, 2008. They are noted with hyperlinked numbers. Please see corrections below.

I don’t know about you, but there’s at least a backpack’s worth of necessities I take on every trip I make. Between the laptop, iPod, cell phone, newest T.C. Boyle novel and toothbrush, my bag fills up pretty quickly. However, astronauts do not have the same luxury of size or weight for their personal effects when they go for a ride on the space shuttle.

One1 repository for personal effects is the Personal Preference Kit, which is about the size of a long paperback novel. NASA allows astronauts to take up to 20 items that weigh no more than 1.5 pounds in this small nylon case. Typically, it is filled with jewelry, photos and various knick-knacks, depending on the astronaut’s whims. More recently, iPods have become commonplace, as they contain music, photos, movies and electronic books that would otherwise take up more space. While these devices could technically fit in the PPK, they are actually flown as “Crew Personal Items.”2

However, there is one problem with the standard iPod: batteries. There is no way to recharge the device in space. So, NASA equips the iPods with a converter that looks shockingly like one made by Belkin that uses four AA batteries3 in addition to the rechargeable lithium-ion one in the device.

While these petite cases are good for iPods and other small personal effects, there is another avenue for larger doodads to get to space: the Official Flight Kit. The Official Flight Kit is the stowed luggage, opposed to the carry-on. Logging in at only two cubic feet, or about the size of a milk crate, astronauts have to select the tokens to be stowed in this kit carefully.

On an average shuttle mission, about half of the items in the Official Flight Kit are there on NASA public relation business, while the remaining items are for various groups that ask the astronauts to bring a token on their behalf. The items are then returned after the trip.

Past missions have taken the standard assortment of flags, pins and commemorative patches. But some of the more notable objects are a piece of the Wright brothers’ original aircraft, a 1611 lead cargo tag from Jamestown colony, Luke Skywalker’s lightsaber prop from the movie Star Wars, a conductor’s baton for the Boston Pops Orchestra and the seeds that later became the “Moon Trees” that were planted across the county in celebration of the 1976 bicentennial.

The first astronauts also had Personal Preference Kits on the earliest missions to space. Every once in a while they will turn up in an eBay auction, like Apollo 17 Commander Gene Cernan’s kit that spent six days on the moon or in lunar orbit in late 1972.

In 1971, the members of the Apollo 15 mission ferried Alumni Chapter Papers to the moon for the University of Michigan, which is the only school to claim the distinction of having a lunar branch.

Some of the more famous space trinkets are the dimes that traveled with Gus Grissom in his Mercury Capsule (it was originally thought that they were Grissom’s, but now experts believe that a sneaky tech stowed them aboard). When the hatch accidentally blew4, the dimes and capsule sank to the bottom of the Atlantic – deeper than the Titanic. In 1999, divers recovered the craft and three of the dimes which5 are now on display at the Kansas Cosmosphere and Space Center in Hutchinson, Kan.

This February’s Atlantis shuttle mission to the International Space Station carried three NASCAR starter flags to space to celebrate the 50th anniversary of both the race and NASA itself. The first flag will soon be awarded to Ryan Newman, the winner of this year’s Daytona 500, the second will be displayed in the Daytona racetrack museum and NASA will keep the third.

The current mission of the space shuttle Endeavor, which is scheduled to land this Wednesday, will return with a similar assortment of new space paraphernalia. Astronaut Bob Behnken has a set of wedding rings for his impending nuptials. The pilot Greg Johnson is carrying the title page for the play Expedition 6 by actor Bill Pullman, who wrote about the experiences of the sixth International Space Station crew that had to lengthen its stay by two months after the Columbia disaster.

The parade of odds and ends making its way to space does not seem to be stopping anytime soon. While NASA continues to send the space shuttle to supply the International Space Station, astronauts will continue to bring mementos in both kits. Some of the other soon-to-be space artifacts in this mission’s Official Flight Kit are 100 silver Snoopy pins, a marine mammal poster, a library card for Parsippany-Troy Hills, N.J., 6 and a vial of dirt from the pitcher’s mound at Yankee Stadium.

2. “While these devices could technically fit in the PPK, they are actually flown as ‘Crew Personal Items.'” was added

4. “the dimes that traveled with Gus Grissom in his Mercury Capsule (it was originally thought that they were Grissom’s, but now experts believe that a sneaky tech stowed them aboard). When the hatch accidentally blew,” replaced “Gus Grissom’s Mercury Dimes that were lost when the emergency hatch on the capsule blew upon landing.”

5. “three of the dimes which” replaced “seven dimes that”

Awesome! Its in fact amazing piece of writing, I have got
much clear idea regarding from this article.

Fabulous, what a blog it is! This web site presents valuable
data to us, keep it up.

It’s perfect time to make a few plans for the longer term and it’s time to be happy.
I’ve learn this put up and if I may just I desire to counsel you few attention-grabbing issues or advice.

Perhaps you could write subsequent articles relating to this article.
I want to read more things approximately it!

I think the admin of this web page is in fact working
hard in support of his website, as here every information is quality based material.