Tuna farming advances, but strict fishing regulations might be the only hope for this sushi fish. 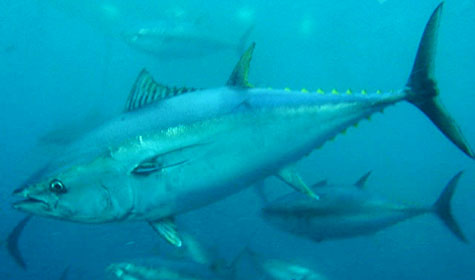 The bluefin tuna population of the western Atlantic has plummeted more than 90 percent since the 1970s. [Credit: Vjekoslav Ticina]

The Atlantic bluefin tuna is so prized for gourmet sushi that it has been overfished to the brink of commercial collapse. Now scientists are studying how to breed these giants in captivity, which could reduce the pressure on wild tuna.

Not everyone supports the research, which recently scored its first modest success. Some experts believe the fish’s habits are too idiosyncratic for commercial fish farming and that breeding efforts are distracting from the more pressing problem of overfishing.

Even so, demand for bluefin sushi is so intense that others say the mighty tuna will inevitably follow salmon, catfish and other smaller fish into successful commercial aquaculture.

“I think that about 10 years from now, we’ll get bluefin tuna to breed via land-based hatcheries,” said Yonathan Zohar, the director of the University of Maryland Center of Marine Biotechnology. “It’s only a matter of time and resources.”

First, researchers will have to get around some problematic facts about bluefin behavior. These tuna can take up to 12 years to reach sexual maturity, compared to about three years for catfish, and getting them to breed outside their natural habitat is difficult. Life in a floating sea cage or giant tank apparently does not provide the right environmental cues to tell the fish to turn on those sex hormones and produce another generation.

A European Union project recently made a start at clearing these hurdles. Zohar collaborated on the paper, published in the July 2007 issue of Reviews in Fisheries Science, which used drug implants to get bluefin to produce fertilized eggs in captivity. In the future, this technique may help scientists overcome the practical and financial barriers to bluefin farming by making the tuna breed at a younger age.

Zohar compares his research to a gynecology practice for fish. The captive tuna’s brains were not producing enough of the hormones that normally tell the fish’s bodies to breed, so Zohar developed a drug treatment that mimics the hormone at the top of the chain of command: gonadotropin-releasing hormone.

The bluefin’s massive size required creativity in drug delivery. To give periodic drug injections to a salmon, researchers just reach into a tank and pick it up. For the tuna, which grow to about six feet long and can weigh over 1,000 pounds, scuba divers had to shoot time-release implants into them with spear guns. The drug then spread through the fishes’ bodies for about a week.

Key tuna farming research has also been taking place in Japan, the leader of bluefin breeding for about 30 years. However, the long wait for sexual maturity has made the endeavor financially impractical. Scientists at Kinki University, for instance, allowed the Pacific variety of bluefin to spawn naturally in pens. These captive breeders produced fish that could make eggs of their own, but not consistently.

Some scientists are skeptical about the prospects of breeding bluefin, and environmentalists say the breeding efforts are a costly distraction. “That’s a really expensive way of not solving a problem — which is the overfishing of bluefin tuna,” said Tom Grasso, the director of marine conservation policy at WWF, a conservation organization that currently supports a worldwide ban on all Atlantic bluefin fishing and encourages people to eat other kinds of tuna instead.

Low fish stocks have especially become a problem for New England. Fisheries experts agree that the commercial bluefin industry in the eastern United States is collapsing. Until 2002, the tuna were consistently putting between $10 million and $20 million into the hands of New England fishermen each year. By 2006, this figure had dropped to only $1.7 million.

The bluefin population of the western Atlantic has plunged by more than 90 percent since the 1970s, according to the International Commission for the Conservation of Atlantic Tunas. Last year, American fishermen brought in less than 15 percent of their allowed catch.

“The harvest in Massachusetts during the last two seasons has been dismal,” said Bradford Chase, a biologist at the Division of Marine Fisheries in Massachusetts, the hub of Atlantic bluefin fishing in the United States. “It can’t get much worse and still be a fishery.”

Some commercial operations, he said, are so desperate that they are sending out planes to try to spot schools of bluefin, but aren’t having much luck finding them. The situation is just as bad for traditional fishermen hunting for tuna with rods or harpoons, Chase said.

Overfishing in the Eastern Atlantic and Mediterranean has likely influenced the precipitous population decline in New England, since tuna can travel across the ocean.

Although the bluefin that spawn, or release eggs, in the Gulf of Mexico and those that spawn in the Mediterranean are distinct populations, research shows that they can cross the Atlantic Ocean. Previously, the two populations were thought to be entirely separate, which is why the current system regulates the groups under different rules.

However, not everyone is following the rules. Whereas American fishermen have generally kept to their strict cutoffs, illegal overfishing across the Atlantic has been rampant for decades, according to fisheries experts.

“The bluefin tuna is really a symbol of the myopic greed in some parts of the fishing industry,” said Steven Teo, a biologist at the University of California at Davis and a member of the team that discovered Atlantic migrations of bluefin.

“It isn’t greed that’s driving this, it’s mismanagement” by other nations, said Rich Ruais, the director of the East Coast Tuna Association, which represents tuna fishermen. “The U.S. fishermen are blameless in this crisis. We’ve followed the science. We’ve done so much more than our fair share to conserve this resource, and we don’t get the credit from environmental groups that we should.” American fishermen have lost at least a billion dollars by limiting their catch over the decades, he estimated, while fishermen from other nations have continued to overfish.

The United States delegation urged a three- to five-year moratorium on bluefin fishing in the eastern Atlantic and Mediterranean at the international tuna commission’s annual meeting last fall. Ruais fully supported this measure, but described the proposal as “dead on arrival” due to the European community’s lack of a conservation ethic.

Even if fishing were halted, it may already be too late for the tuna to recover. “Sometimes when we overfish the population, it can change to a different regime,” said Teo. “The whole ecosystem can change so much that it’s very hard for the population to recover.”

That’s why some researchers say breeding studies need to continue, no matter what happens with fishing restrictions. Zohar thinks that farmed fish could be both directly marketed as food and used to replenish wild populations in the sea. But other scientists point out that fish reared in captivity might adapt to that man-made environment and then do more harm than good when released into the sea.

Although much of the debate surrounding bluefin tuna focuses on its commercial prospects, those who have worked with it in the wild point out that satisfying the demand for sushi is not the only reason to protect the fish.

“They have to be one of the most beautiful animals in the sea,” said Molly Lutcavage, who studies tuna migrations as a professor of zoology at the University of New Hampshire. “They’re simply majestic and just by looking at them you can almost feel their power.”

Check out Eric Olson’s blog about our troubled oceans and learn about Brooklyn’s very own fish farm.

A page turner! If it was in a can, people would eat it!

It’s interesting that Tuna reproductive systems work similarly to our own: humans also produce gonadotropin while pregnant, and this same hormone can induce pregnancy in other organs, such as frogs. Neat bit of evolutionary conservation.
Great article, by the way!

Hormone induced spawning spawning is a common aquaculture practice with a long history. It goes back half a century to using carp pituitary injections into carp and other species creating a mini-business in carp pituitary extracts. Gonadotropins are great for getting ovulation when you want it. If you are doing specific crosses, there is a big advantage to getting ripe eggs and sperm on schedule.

Moving to full life-cycle aquaculture on bluefin tuna may be the only way to prevent a total crash of the population. Fishing restriction would just up the price and illegal harvest. Aquaculture on a massive scale would cut the price and increase the quality — aquaculture can harvest at a market maximum. To protect this species, a few 10’s of millions of dollars into reproductive research would be appropriate.

What happens when people eat the gonadotropin in the farmed tuna?

Yes, it is very, very good! I guess a rotating bio-contactor is used to purify water. The more often it is used the better it is for our Earth.

If I was in a can, I would eat tuna too.

Dear sirs
We are from chinese biggest manufacture of carp pituitary, so glad to
contact with you,
it is wildly used in fish breeding industry,
1. our price is USD 180/ gram, min order 10 grams.
2. we could offer sample order (1-2 grams) to check quality
3. we have certificate and test report based on quality control

how much do fish fart? and can they splatter diareah out of their hole?

Very interesting article. I hope that sustainable tuna farming can make the necessary progress before its too late.

http://www.BlueFinHosting.com will donate 10%* of their yearly net to the cause.