The world's largest landfill is slated to become the biggest park in New York City. 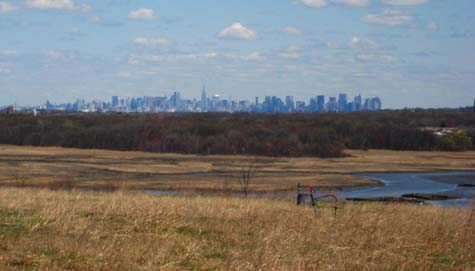 A view of the city from the landfill's north mound.
[CREDIT: MOLIKA ASHFORD]

On a clear warm Monday, a green Parks Department Jeep drives up and over a set of steep grassy hills. With a flash of brown, a red-tailed hawk glides away effortlessly, hovering so close to the ground that it casts a large shadow on the stiff grass and duff of the hillside. To the north, over the rise, is a gently meandering creek that forks in the distance and bleeds out into a flat, damp wetland. Birds sing. Trees grow. Flowers bloom. All around, there is a bright hum of early spring.

Yet close below the studded rubber of the Jeep’s tires, under only two feet of soil and a cap of hardened clay, there are 150 million tons of solid waste—plastic and tile, food, tin, shards of wire, twisting rivers of decay, yards of old shoes, branches, bales of plastic bags, nests of soil, electronics and rubber bands. It is the top of the north mound of one of the largest man-made objects ever constructed—Staten Island’s Fresh Kills Landfill.

Created in 1948 by Robert Moses, the dump was originally slated to operate for only three years, but wasn’t closed till 2001, when Mayor Giuliani finally made good on a promise to the Staten Islanders who had been living with the landfill 50 years too long. On September 4, 2008 the New York City Department of Parks and Recreation held a hearing to discuss the environmental-impact statement released by the project, which assesses the natural toll of transitioning from dump to park. With this assessment in hand, the Fresh Kills park project has finally moved from a conceptual stage to a practical one. Fresh Kills won’t be the first or even the tenth park on a former landfill site, but it will be the largest, with $198 million in initial funding and the first section of the park scheduled to open in the next two years.

The Fresh Kills site sits as an emblem of New York City’s complicated relationship with both trash and nature, policy experts say. New garbage, which now goes anywhere but Fresh Kills, often travels long distances at increasing expense to be landfilled somewhere else or burned for energy, while old trash sits under the site of a 30-year multimillion-dollar park project.

“Fresh Kills to me is already an astonishingly beautiful place, and once it’s a park it will only be even better,” says Robin Nagle, a professor of anthropology at New York University. Already, the site is mostly clean and bucolic, and there is not a tin can to be seen. But, the legacy of the garbage, though invisible, is still prominent.

The Legacy of Trash

A big environmental concern of a post-landfill park is the trash itself. The first step toward a clean, odorless and safe park is to seal that trash away. To do this, the landfill is shaped so that the hills are not too steep and then covered in something called a geomembrane. “It’s just a thick, thick plastic,” says Michael Marrella, a project administrator from the Department of City Planning.

Two of the landfill’s four mounds are being capped this way right now, and two have already been completed with a clay barrier instead of a plastic one, which Marrella says is just as effective. Over the membrane or clay, workers lay two feet of clean dirt that become the base of the future park.

“If you put on the right kind of cap there’s no reason [a landfill] can’t be used for a park. It’s just a matter of monitoring,” says Steven Cohen, an environmental policy expert and the director of the Earth Institute at Columbia University. “Gravity pushes everything down and out,” he says. “The best place to be, really, is on top.”

The two significant monitoring issues for humans and wildlife in a post-landfill park are the production of gas in the tightly capped mounds and leachate, the vile liquid produced by the decomposition of the trash. At Fresh Kills, the liquid channels downward and out to the bottom of the mounds. “It gets sent to the southern edge of the site where they do something like sewage treatment,” says Marrella. Then the treated leachate is released into the Arthur Kill, the waterway between the west side of Staten Island and New Jersey.

Gas is also collected and transported to another facility onsite, where it is purified and then sold as methane fuel for around $11 million a year. Both the south and north mound are dotted with J-shaped pipes and valve systems that pump the gas to its destination and release extra pressure.

Eventually, the hissing pipes will quiet down. “[Gas production] will be so little that they can just let it seep out,” says Marrella. But when that may happen is hard to tell. “It could go 100 years or over 1000 years,” says Nicholas J. Themelis, an engineer at Columbia University.

By the time the park opens, the gas pipes will be entombed in monitoring boxes, to keep them safe from vandals. Marrella says that the infrastructure to keep the landfill gas and juices flowing will be less of a danger to people than they will be to it.

Fresh Kills, if it were still in operation, would be somewhat primitive in comparison to current landfills, which add dirt intermittently with trash to keep things covered and more sanitary. “It took 50 years to fill up, and it would have filled in 25 if it were more modern,” says Themelis. “That means that every 25 years, New York City requires another Fresh Kills. In 100 years you’d need four of them,” he adds. Now that Fresh Kills will become a recreational area, all of that trash needs to go somewhere else.

you do a great job of telling the truth here.. as i learned it in my masters studies at least.

i just wonder how appropriate, as a journalist, it would be to include more information and slant on the NEED to cut down on solid waste production. would that make the article seem biased? there definitely seemed to be a slant toward calling the landfill ‘beautiful’, which i’d say is a stretch of reality.

back to solid waste, in my mind a global environmental issue paramount to global warming and nuclear proliferation. there is a HUGE need to stop producing so much WASTE. landfills waste natural resources, and the leachate is really nasty stuff. leachate is filtered, but all landfills leak, so some of it escapes unfiltered. also, when food and other organic waste ends up in the landfill, it decomposes anaerobically and releases methane. It is also impossible to capture all the methane, which is 25 times more powerful a greenhouse gas than CO2. See how it is all connected? Burning the garbage is just as bad , b/c burning plastics (also inevitable) sending carcinogenic smoke out into our air, and eventually our water.

so what is the answer?

well… have every american visit a landfill (and sewage treatment plant and farm and factory farm…) as part of their mandatory grade school education.

can you tell i’m an environmental educator? lol.

anyway, keep up the good work! knowledge is power :)