Improving this enzyme’s function decreases tissue damage during a heart attack and could even help with hangovers. 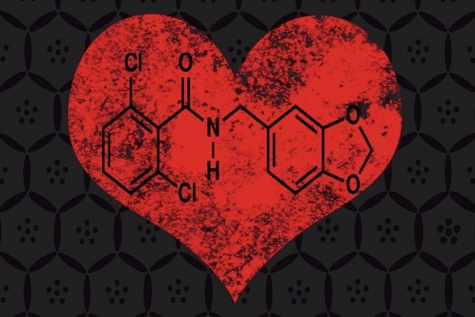 A compound called Alda-1, shown here, amplified the beneficial effects of an alcohol enzyme during a
study in rats. Alda-1 could be used in a drug to help prevent heart attack damage [Credit: geishaboy500,
flickr.com and Boghog2, Wikimedia Commons. Compiled by Shelley DuBois]

An enzyme that helps break down alcohol in the body may someday be able to help patients with heart disease now that scientists have discovered a way to boost the enzyme’s effects.

Enzymes are molecules that help speed up chemical reactions inside our cells. This particular alcohol enzyme has a powerful protective effect on laboratory rats during heart attacks, according to a study in the journal Science. A team of researchers from Stanford and Indiana Universities found that the more active the enzyme was, the less likely a rat was to suffer tissue damage from a heart attack.

“We found a tight correlation between this [enzyme’s] behavior and the infarct size,” said Daria Mochly-Rosen, a pharmacologist at Stanford University School of Medicine, who led the study. Infarction is a term for the cell death that occurs when blood flow to the heart is blocked, causing oxygen starvation in the heart cells.

The researchers used a compound called Alda-1 to stimulate the enzyme in the rats. If Alda-1 is found to have the same enhancing effect in humans, it might one day be used to treat certain types of heart disease and to prevent damage from heart surgery, Mochly-Rosen said.

Scientists knew that certain substances, such as alcohol, could protect the heart muscle if given during a heart attack, but they were not sure why. The key, Mochly-Rosen’s team found, is heightened activity of the enzyme, known as aldehyde dehydrogenase-2 (ALDH2).

When the researchers gave the laboratory rats alcohol, they found that heart damage decreased as ALDH2 activity increased. The scientists then searched for a compound that would increase ALDH2 activity even more, and they identified Alda-1 as the best activator. Treating rat hearts with Alda-1 reduced heart attack damage by 60 percent.

Normally, ALDH2 removes toxic aldehydes, one of the byproducts of alcohol breakdown that can damage the body’s cells, and converts them into a harmless compound. During a heart attack, highly reactive oxygen molecules, known as free radicals, can give rise to aldehydes and cause cell damage. Mochly-Rosen’s team believes that Alda-1 works by stimulating ALDH2 activity, causing the enzyme to break down the harmful aldehydes.

“We are enhancing the cells’ own machinery to get rid of these damaging agents,” said Mochly-Rosen.

Alda-1 also has the potential to help fight other diseases that cause tissue damage with free radicals, such as Alzheimer’s and Parkinson’s.

In order to see the protective effects, the scientists had to administer Alda-1 right before they induced heart attacks in the rats. Since people do not know when they are going to have a heart attack, the compound might be most useful during situations that require the interruption of blood flow to the heart, such as heart surgery, according to Mochly-Rosen.

However, not everyone thinks the team’s findings will lead to a new heart drug, because similarly functioning molecules have not been pursued by the pharmaceutical industry. About 20 different compounds have been linked to heart attack protection in animal studies, but drug companies are not rushing to develop them, explains James Downey, a professor of physiology at the University of South Alabama.

In the last 30 years, pharmaceutical companies have spent billions of dollars testing a number of drugs from promising animal studies, but so far many of those tests have been unsuccessful, according to Downey, who was not involved in the study. “As a result, drug companies are very reluctant to spend any more money on what looks to them to be a black hole,” he wrote in an email.

Another potential use for Alda-1 could be treating people with a mutant form of the enzyme ALDH2. About 40 percent of people of East Asian descent have a mutation in this enzyme that greatly decreases its activity and causes alcohol intolerance. People with this mutation cannot break down toxic aldehydes easily, causing headaches, nausea and redness in the face. In their experiments, the researchers were able to restore the activity of mutant ALDH2 to normal, indicating that Alda-1 may allow people with the mutation to be more tolerant of alcohol.

There is even a possibility that Alda-1 could be used to help prevent hangovers, since aldehyde accumulation causes unpleasant hangover symptoms like headache and vomiting. “I would be very sad” if Alda-1 ends up only being used as a remedy for hangovers instead of for heart disease, Mochly-Rosen said. “If I make a drug, I want it to be something clinically relevant.”

Heart attacks – does the time of day affect survival?

“Flight or fright,” exercise, and your heart rate.

Dying of a broken heart.

This blog Is very informative , I am really pleased to post my comment on this blog . It helped me with ocean of knowledge so I really believe you will do much better in the future . Good job web master .