An enzyme could offer clues to a new treatment for multiple sclerosis. 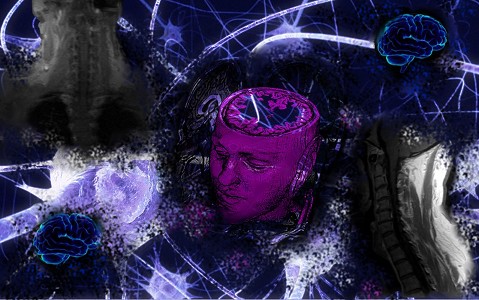 At age 30, filmmaker Jason DaSilva sees the world through a grainy, shaky lens and shuffles around his Manhattan neighborhood with the aid of a walker. DaSilva’s vision problems and weakness are symptoms of his multiple sclerosis, known as MS, a disease caused by the deterioration of brain cells and the fatty membranes that encase them.

DaSilva’s MS is the progressive form, which affects 15 to 20 percent of the 400,000 MS sufferers nationwide. Unlike acute MS, in which physical deterioration periodically starts and stops, there is no treatment for the progressive form. Although DaSilva’s disease hasn’t kept him from pursuing his passion — his films have been screened at more than 30 festivals, including Sundance — his symptoms keep getting worse.

A discovery by researchers at Mayo Clinic in Rochester, Minn., however, may open the door to new treatment options for patients like DaSilva. Scientists found that MS patients had elevated concentrations of an enzyme called Kallikrein 6, or KLK6, in their bloodstreams, and that those with the highest KLK6 levels were the most disabled by MS.

The study also found that the enzyme injured brain cells in mice. Researchers postulate that deactivating KLK6 could slow the progression of an MS-like condition in mice, and they hope to develop a similar treatment for progressive MS in humans.

“We’d like to see if we can protect the nervous system from damage and promote recovery of function” by halting the action of KLK6, says Isobel Scarisbrick, a biomedical researcher at Mayo and lead author of the study.

Potential treatments might keep KLK6’s harmless precursor molecule from morphing into KLK6, which damages the brain, says Dr. Michael Blaber, a professor of biomedical sciences at Florida State University and a co-author of the study. Preventing the formation of KLK6 could stop the progression of MS symptoms by preserving myelin, the fatty sheaths that encase brain cells, he says. Destruction of these membranes causes muscle spasms, vision problems and other MS symptoms by slowing the nerve impulses that race from the brain to the rest of the body.

A blood test for KLK6 could help diagnose MS without invasive examination of the brain, says Scarisbrick. Doctors already test for Prostate Specific Antigen, a bloodborne enzyme similar to KLK6, to detect prostate cancer. Any molecule to help diagnose MS “would be a major advance, because we just don’t have any,” says Dr. Joseph Herbert, director of New York University Medical Center’s Hospital for Joint Diseases Multiple Sclerosis program, who was not involved in the study.

The discovery has proven exciting to DaSilva, whose latest film chronicles his struggle with MS. “There’s very little information on [progressive MS], which leaves us high and dry,” he says. “Many times, doctors have said to me, ‘We don’t really know a lot about this.’ So this makes me feel really hopeful.”

Although the protein may have potential, it could be years before a new remedy for progressive MS is available because scientists must test treatments on mice before beginning trials on humans.

“A mouse is not a man,” says Scarisbrick. “You can find something to be very effective in an animal model, but when you turn to a patient, you find that it’s not.”

And while KLK6 levels may be related to MS severity, the disease has many causes, says Blaber. “Some are genetic, some are environmental and some are biochemical, such as building up and breaking down myelin,” he says.

Still, future developments could increase the quality and length of life for those with MS, and that leaves DaSilva optimistic. “It’s one way to give hope to me and to others with progressive MS,” he says. “It shows that science is going down the right path.”

How stem cell research could help fight another disease that destroys nerve cells.

Is it not possible in these articles to be a bit more down to earth. I realize that it is written from scientific publication but when reproduced for general consumption, can the article not be fleshed out a bit. Most of us with MS have gotten pretty good at reading techno speak while researching our disease, we still do not quite have our diplomas. So, on that tack, would it be possible to say slightly less specifically what KLK6 is or is not? Is it produced just in human bodies? Do we make it ourselves or do we make more or less KLK6 by our own activities or diet? Is it a “birth defect” for lack of better description?
It really would be helpful if these re-writes included more info on the specific research target such as KLK6 in this instance.

I think this is a great step for those of us suffering from MS. Being able to measure KLK6 levels and monitor the disease’s progression can only lead to more information and a possible breakthrough. Thank you for sharing this with the general public. The more that is written about the illness, the greater chance there will be funding and (hopefully) an eventual cure.

We don’t go extremely in-depth in our articles because many of our readers may not have your background knowledge. I touched on your questions in the article but am happy to offer clarification.

KLK6 is not a “birth defect” but rather is an enzyme naturally produced both in humans and in animals, such as mice. An enzyme is a protein that speeds up a process without itself actually being used up; in this case, the process being accelerated is the breakdown of the fatty covering of brain cells. Just as scientists don’t know why certain people develop MS, they aren’t sure why some people have elevated levels of KLK6 in their bloodstream–they’ve just seen that these levels correlate with having MS and with the severity of MS symptoms.

You can read more about KLK6 and Scarisbrick’s team at http://www.mayoclinic.org/news2008-rst/4988.html?mc-emref=y.