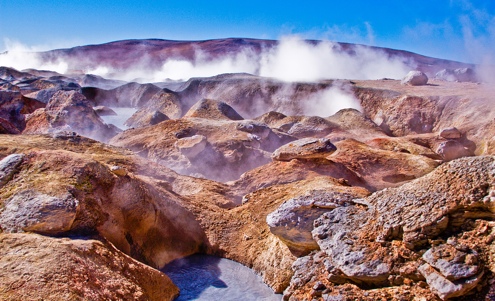 Thirty years ago, a University of Illinois microbiologist named Carl Woese famously declared that some microbes are so different from the rest that they should be classified as a third branch of life. They are archaea, sharing the stage with bacteria and with eukarya, the branch that includes plants, animals, fungi and microscopic protists. Their toughness soon became legendary.

They cropped up in places that would kill most things: from geysers and oil wells to salt lakes and polar seas. Then some were found inside animals, including us, and suddenly scientists were seeing them everywhere: in the soil, the water, anywhere the rest of life can exist and even where it can’t. That’s when the chin-scratching began. Many bacteria and eukarya are well known pathogens – if you can name the infection, one of them is probably responsible. Yet archaea seemed innocent. Maybe they are, which prompts speculation that they could hold a genetic key to curing disease. Or maybe they have been causing disease all along right under our noses.

“There is no inherent reason why archaea should not be involved in diseases. There is no fundamental biological or ecological barrier,” said Torsten Thomas, a microbiologist at the University of New South Wales in Sydney, Australia. “It has been talked about in the scientific community for many years but nobody has really studied the reasons for the existence or nonexistence of pathogenic archaea.”

Thomas thinks that should change. Archaea, he argues, may be responsible for some diseases with no known causes, such as Crohn’s disease, arthritis, lupus and gingivitis, to name some of the better known on his list. Many of his peers disagree, but if Thomas is right, then science is at a loss now to defend us against those diseases. There are no anti-archaeal drugs in development, and these microbes are daunting potential foes because they are poorly understood, hard to study and easily foil common techniques developed to ferret out conventional microbial culprits of disease.

So far, the case against archaea is circumstantial, but they have no obvious alibi: archaea live inside us and other animals in guts and orifices – the same places where many diseases take their toll.

Some scientists have begun peering into those places, this time with an eye out for archaea. In one study, microbiologists at Stanford University teamed up with peridontologists – experts on gum disease – at the University of California, San Francisco to plot the kinds of archaea found in the mouth.

“What became apparent fairly quickly was that somebody either had archaea or they didn’t,” said Paul Lepp, now at Minot State University in North Dakota. “And if they had it, you found it in peridontitis sites.”

The more archaea the researchers found, the worse the gum disease. But the evidence wasn’t exactly a smoking gun, since the archaea were present in only about one-third of diseased gums, and shared the space with many other kinds of microbes. They published their results in April 2004 in the journal Proceedings of the National Academy of Sciences.

A similar study by scientists in Brazil and Germany found archaea in five out of 20 gum disease samples. They also linked archaea with infectious disease without implicating them explicitly as the cause, according to a paper published in April 2006 in the Journal of Clinical Microbiology. And sights were not just on gum disease. That same year, Japanese researchers examined plaque from 13 coronary arteries and found evidence of archaea in all of them. They published their results in the journal Clinics, concluding that they may be the first to discover disease-causing archaea inside human organs. Lepp warned, however, that their methods may have been flawed in part because they lacked proper experimental controls.

Stanford’s David Relman, who headed the American gum disease study, has forged a reputation as an archaea disease hunter. But unlike Torsten Thomas at New South Wales, he does not suspect they could be a direct cause.

“I think that the archaea can contribute to pathology and to disease, but I don’t think they do so alone or in a direct manner,” Relman said. Instead, he believes, “They allow other organisms to flourish to a much greater degree than they would otherwise. But it’s a consortium, a group effect. It’s not an effect they are able to carry out on their own.”

His hypothesis hinges on the archaea’s diet. Those found in humans and other animals are methanogens – they consume hydrogen made by bacteria and excrete methane gas. (Not all archaea produce methane, but they are the only creatures that can – it’s one of the differences that sets them apart from the other two domains of life.) Thriving on the waste of other microbes, they clean house, which may allow disease-causing bacteria to multiply.

Archaea have a so-called grandfather, Ralph Wolfe, who is skeptical they could cause disease. Wolfe, a microbiologist at the University of Illinois, earned his nickname studying archaea for decades, since before they were given their own taxonomic domain. He worked alongside Carl Woese as the concept of three domains of life gained momentum. Archaea, Wolfe believes, are too primitive and biologically isolated to cause disease in animals, though he does not discount the idea of the consortium effect.

“I would say it’s a dead end, but in science you can never tell,” he said. He does agree with Thomas on one point, though: studying archaea is tough, and was harder still when he started his work without the benefit of the technology available today.

The old technique, he said, was to swab an abscess, for example, and breed the extracted microbes on agar – a seaweed gelatin that nourishes them. Outside of the body in oxygen-rich open air, only those bacteria that survive in oxygen multiplied. The methanogens and other anaerobes vulnerable to oxygen, if there were any, were smothered.

“So,” Wolfe conceded, “unless a laboratory takes a lot of caution to separate anaerobes from the sample then they could be missing something.”

Thomas insists that archaea need to be studied further before they can be eliminated as suspects in causing unsolved diseases. Even if they are ultimately proven harmless, he says, that finding could be important if it turns out that archaea have a gene that suppresses toxicity – a gene that might be useful someday in stifling the power bacteria have to inflict damage.

“I think that if we don’t find any pathogenic archaea it would be very interesting to find out why they aren’t,” Thomas says. “Obviously that’s the best target to attack in bacteria. If we find something that bacteria do have and archaea don’t have, we need to attack that.”

Some bacteria have a genetic defense against extreme conditions.

Here an easy review for background info on bacteria and microbiology in general: Microbiology Review. I don’t know if they separate archae from “traditional” bacteria.

Greetings, I have been a researcher for years in several disciplines, molecular biology, neuroscience, infectious diseases, and medicinal chemistry. Past years research and data suggests that archaea play an increasingly important role in human health and pathogenesis. Recent literature suggests some may have virulence factors implicated in carcinogenesis and the evololution of cancer. I do like that this article point out the problems with studying archaea. Even the data out on acidophiles and alkaphiles I feel may be inaccurate since the tools we use account or assume a “physiological pH”, in which case, this may disrupt the biochemistry more than accurately represent it. Studying this may take a whole host of new approaches.

Is this archea the same that produces SIBO methane? In the GI tract? I would like to have more information about it because in a breath test at Cedar Sinai hospital in Los Angeles my results were Sibo – methane