No One Wants to Be a Loser

Overbidding out of fear can lead to a fast trip to the poorhouse. 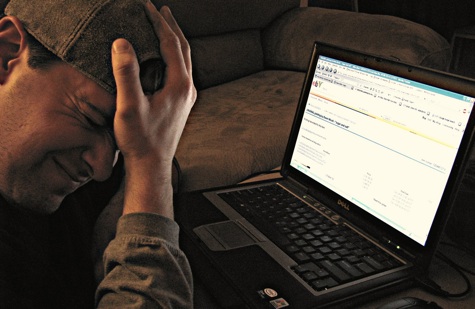 It's tough to be outbid; new research suggests that fear of losing could prompt addictive behavior [Credit:
Adam Lynch, flickr.com].

Jo Ann Delgado was locked in a heated bidding war. With her eyes glued to the computer screen, she contemplated her opponent’s next move. The object of desire was a pair of football tickets to surprise her husband. She had already bid more than she wanted to, yet back and forth she continued, the price rapidly escalating as she vied against a lone competitor. Ultimately, she fell short.

“She just had to beat that guy,” recalled her husband, Mauricio Delgado, who was puzzled by the episode and the longstanding question it raised: What possesses people to overbid, or spend more than they can afford, on an item? Delgado, who happened to be a psychology graduate student at New York University at the time, turned the question into a long-term research topic and now thinks he knows what triggers such overbidding: fear of losing.

Previous economic theories say overbidding is driven by factors like the joy that often accompanies victory. However, Delgado, now at Rutgers University in New Jersey, examined the brain’s response to simulated auctions and found that the area of the brain associated with contemplating loss was highly active. The findings, published recently in the journal Science, could potentially change our understanding of all kinds of auctions, from eBay to government bailouts.

Researchers peered inside the brain with live imaging to pinpoint the response to an area associated with fear, the striatum. Activity in this region escalated as overbidding increased, suggesting that the higher subjects bid, the more they thought about the possibility of losing.

The issue is not yet settled, but the work advances the thinking of those in the field and is “particularly exciting,” according to Andrew Caplin, an economist at New York University.

On a small scale, fear of losing applies to online auction sites like eBay, where multiple people bid on the same item. Any auction where fear is involved – such as the fear of losing out on tickets to a sold-out sporting event – will maximize revenue for the auctioneer and could potentially leave the winning bidder in a financial bind, said Erkut Ozbay, an economist at the University of Maryland and a co-author on the study.

“It’s not like Amazon.com,” where people simply shop online, said Kim Young, psychologist and director of the Center for Internet Addiction Recovery in Bradford, Pa. “It’s the competition that gets them going.” Young compared the phenomenon of overbidding in auctions to playing poker, where beating the other guy is just as important as winning money.

The new findings may also provide insight about the United States government’s $700-billion bailout of the financial sector.  As the treasury attempts to rescue banks by purchasing troubled assets, Ozbay said, establishing the assets’ worth can prove difficult.

During so-called reverse auctions, Ozbay said, where the auctioneer is trying to buy, not sell, the government must discover the fair price of the assets while ensuring fear does not influence its bidding process. If the government is afraid of not providing enough funds for the bailout to succeed, it will compensate by overbidding and waste taxpayer money, he cautioned.

No effective strategy is yet known for removing fear and promoting rationality in auctions. So for now, the next time Jo Ann Delgado sits down to bid on a pair of football tickets, she needs a good back-up plan – like throwing a party for her husband instead – so that fear of losing out on that perfect gift does not lead to risky impulsive bidding.

After all, said Ozbay, “no one wants to be a loser.”

Can the brains of teen criminals affect their legal fate?

I’m going to encourage my wife to start bidding on that bungalow in Bali as soon as possible!