An underwater spy and the man who's building it. 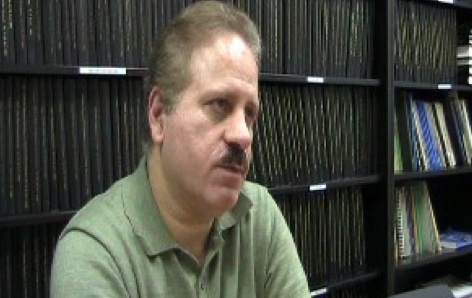 What looked like a two-toned tackle box with a stingray tail swam underwater in an elongated aquarium, eliciting a smile from Farshad Khorrami as he watched it on his laptop screen. The box looked like Tupperware and it turns out it was. It was the oddly low-tech housing for experimental electronics – the prototype of a robotic electric ray. This was the latest of the robots Khorrami has developed as director of the Control/Robotics Research Laboratory at New York University’s Polytechnic Institute in Brooklyn.

Through his sandy mustache, he explained the oddity with an Iranian accent subdued by a college education in the American Midwest. The tail represents a novelty in underwater propulsion, he said, mimicking the sideways undulations of a living ray.

The rest is still in development. Over the next two years, Khorrami and a team of Polytechnic graduate students, working with researchers at Vassar College, will replace the box with a replica of a ray’s body, shaped like an oblong Frisbee flanked by wing-like pectoral fins. For now, preliminary fins of clear Kevlar and rods that look only slightly more complicated than Saran Wrap between Popsicle sticks balance the Tupperware body.

The contraption seems deceptively simple, as is much of Khorrami’s work. He breathes life into familiar materials with new robotics. His inventions have military and civilian applications from surveillance to manufacturing. For more than two decades he has worked on an array of projects like high-speed electronics assemblers, satellite controls and robotic planes, helicopters and boats. He has attracted about $2 million in military and commercial funding.

The robotic ray could be used to police harbors, seek mines or take samples of polluted water for laboratory studies. But uses aside, Khorrami seems more enamored of the mechanical problem of making a robotic copycat of a living ray. The solution will put an autopilot program at the helm of a unique propulsion system. The autopilot is governed by algorithms – step-by-step numerical instructions for solving puzzles when it doesn’t have all the pieces. The algorithms do what the brain does when you’re driving with a glare on the windshield – fill in the blind spots with the best guess. Finding the right numbers is a challenge to which Khorrami may be uniquely suited. For him, merging equations with gadgetry fulfills a decades-long infatuation with both.

In his teens, he indulged his mechanical bent by tinkering with telephones and electronics. At 15, he was assembling AM radios from diagrams and piles of parts.

Two years later, in 1979, the Islamic Revolution toppled Iran’s monarchy and Khorrami moved to Ohio, where he pursued advanced degrees in mathematics and electrical engineering. His two older brothers arrived first, padding his transition. Since then, he has rarely returned to his hometown to visit family, relying, as always, on electronic communication.

In the robotics lab, as Khorrami and his team work out the kinks, they will stuff the ray’s body with sensors and instruments including cameras, a compass and a three-dimensional magnetometer to aid in navigation. The equipment will determine the machine’s position and direction underwater where GPS, which relies on radio signals that cannot penetrate water, is useless.

Ali Keyhani, who heads the green energy laboratory at The Ohio State University, has seen Khorrami confront the kinds of challenges the ray presents. The two of them collaborate to build controls for new, decentralized energy grids that they believe will be the highways for green power production in the future. Keyhani once witnessed Khorrami’s relentlessness in action as he ironed out a balance problem on an unmanned airplane. It took several tries and about two years.

“He is really dedicated,” Keyhani said. “He’s very stubborn and goes after his goals and accomplishes them.”

Khorrami admires electric rays, though he calls them lazy. The trait lends credibility to the robotic versions as underwater spies, he said. The robots can mimic real rays by lying on the sand while their sensors survey the area. Their laziness also manifests as methodical, conservative motion that Khorrami admires.

“With very little movement in that tail it can glide for a while. This is one of the beauties, that efficient action,” he said.

Recreating that action will require some engineering handiwork that pits the capabilities of machines against those of animals.

“I’m giving away some of the secret,” Khorrami said, looking away from the monitor where he had played the video of the ray. “Shape memory alloy.”

The alloy is a composite of nickel and titanium, called nitinol, that can “remember” a shape and return to it after it is bent. It simply requires heat. Khorrami gave a rough explanation of his plan: he will embed nitinol wires in the ray’s movable parts and activate them with a pulsing electric current. With each pulse the wires should make the parts twitch.

“The standard way to [make it move] would be to use off-the-shelf servos,” he said, referring to the devices that propel remote-controlled helicopters, for example. “We’re trying to develop our own [mechanism] to make it stealthier. When you move your arm you don’t hear much noise, do you? So the idea is, we’re trying to make it more like a muscle.”

A “lazy” muscle, to which Khorrami will apply his hard work and stubbornness.

With the help of robots, Joy Crisp is solving the mysteries of Mars.

Listen to a round table discussion about the ethics of robot warfare.

I’m betting you have an amusing video to go with this story, eh? {grin}

I do not doubt your success, CONGRATULATIONS!!!