Vehicles could get a boost in gas mileage from GenShock, a shock absorber developed by students at the Massachusetts Institute of Technology. 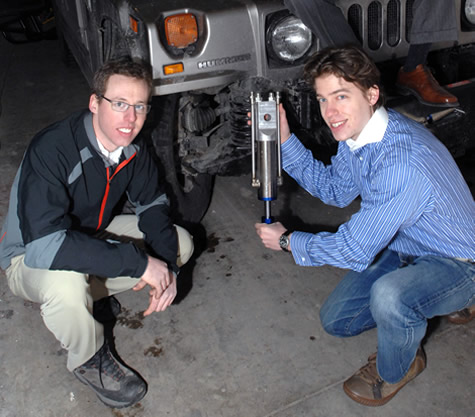 Every time U.S. Army convoys in Iraq deliver fuel to Humvees—the military’s gas-guzzling workhorse vehicles—they run the risk of hitting roadside bombs planted by insurgents along the most common fuel routes. Recognizing this threat, the Army is demanding that the next generation of military vehicles, to be phased in by 2013, burn less gas.

A new shock absorber, called GenShock, could help the Army meet its fuel-efficiency goals. Developed by a team of engineering students from the Massachusetts Institute of Technology, or MIT, GenShock generates electricity as it cushions a vehicle’s body from bumps in the road. The inventors have shown that, for a Humvee, GenShock produces a five to ten percent improvement in the vehicle’s current fuel efficiency of eight miles per gallon. After building shocks for the Humvee, the team plans to focus on heavy trucks and, eventually, consumer hybrid vehicles.

“I want GenShock to be standardized on each of those vehicles, and prove to the U.S. military that my product benefits the American war fighter,” says Shakeel Avadhany, an MIT senior who developed the regenerative shock absorber along with two other undergrads and three recent alumni.

To develop GenShock, the MIT group founded Levant Power Corporation, which is partnering with AM General, the manufacturer of Humvees and its civilian counterpart, the Hummer. AM General will begin evaluating a GenShock-retrofitted Humvee in July 2009 to determine if it will include the technology in a design for the Humvee’s successor. The Humvee manufacturer holds a $45 million U.S. Army contract to develop a design scheduled for evaluation in 2011.

The concept of regenerative shock absorbers dates back at least to a patent from 1974. While the MIT team is not the only group developing the technology, few devices have actually been constructed because, until now, there was little market for them, according to Dr. Jim Stansbury, the founder and CEO of the Physics Lab of Lake Havasu, Arizona. Stansbury created Regen EV Shock, a device more or less identical to GenShock, and is now working on the fourth-generation prototype to improve fuel economy by 10 to 20 percent. He does not envision market conflicts between his own product and GenShock: “There’s plenty of market for both of us.”

GenShock began to take form when the team members at MIT decided to put aside their class work and develop their own ideas to, as Avadhany puts it, solve the world’s biggest problems. As they discussed ways to generate power in a vehicle, it hit Avadhany that energy could be recovered from the suspension system. Armed with a pencil and a piece of paper, the group dashed off some calculations. “We found the amount of energy…compelling,” recalls Avadhany, “compelling enough for us to say, ‘Man, let’s do this.’”

So far, only the MIT team has seen GenShock in action, using a Humvee loaned to the team from AM General for testing. But based on the concept, Mark Schumack, a mechanical engineer at the University of Detroit Mercy who is not involved with Levant, says, “It looks very neat.”

In form and basic function, GenShock is not much different from currently available shock absorbers. It is a long metallic cylinder about the same size as other shocks with a piston rod extruding from one end. Like conventional shock absorbers, its hydraulics-based system transfers the force from the up-and-down movement of tires during a bumpy car ride to the piston rod, pushing the rod down into the cylinder and compressing its hydraulic oil.

GenShock’s advantage comes from transforming the energy in the compressed hydraulic oil into electricity. Normally, the compressed oil generates thermal energy that would simply be lost as the oil cools. But the MIT entrepreneurs rerouted the hydraulic oil to turn a miniature, wheel-like turbine that converts the thermal energy to mechanical energy. Then, a small generator converts the mechanical energy to electric power. The electricity can be used to charge the battery in trucks and heavy vehicles. For hybrids, the energy supplied by GenShock can go directly into the powertrain, the system that makes the vehicle’s wheels turn.

GenShock saves the most gas, up to 10 percent, in vehicles that are running on rugged roads and carrying heavy loads. Under these conditions the shocks are very active, providing the most energy.

Retrofitting the test Humvee with a GenShock on each wheel does not change the feel of the ride, says Zack Anderson, an MIT senior on the team, but future prototypes will be equipped with an advanced electronics system to optimize damping and deliver a smoother ride.

Heavy trucks, in which GenShock increases the fuel efficiency nearly as much as in Humvees, are also a likely market for the new technology. Anderson estimates the product could save companies with large truck fleets, like Walmart, tens of millions of dollars per year.

The MIT team hopes to eventually bring GenShock to consumer hybrid vehicles. Although the more likely route to the consumer market would be to manufacture GenShock in vehicles in the factory, Anderson says the team plans on selling kits to retrofit vehicles, adding that a vehicle would not need to be modified to install a set of GenShocks. The group has not yet estimated how much a set would cost or how much it would improve the mileage of a passenger car.

One problem facing GenShock is that, given the recent drop in gas prices, consumers may not want to invest in more expensive shocks to save a little money at the pump, says Mike Millikin, an editor at Green Car Congress, a web site that provides news about sustainable transportation. “Right now, we’re looking at a decline in sales of hybrids simply because the price of fuel has gone down,” he says.

According to Millikin, automakers interested in installing regenerative shock absorbers like GenShock could take several years to test their performance and durability before deciding whether or not to make them standard. Its creators are hoping that GenShock will have a leg up with automakers if it proves its potential in military vehicles. Says Avadhany, the MIT senior: “You build a product that’s A-Okayed by the military, that means it will surely be reliable.”

the idea is impressive, the video a bit to long .. I want to see the shock in action show me power output!

System which allows the choice, to air-condition or warm ecologically all the rolling vehicles

Two inventions published well before this one: